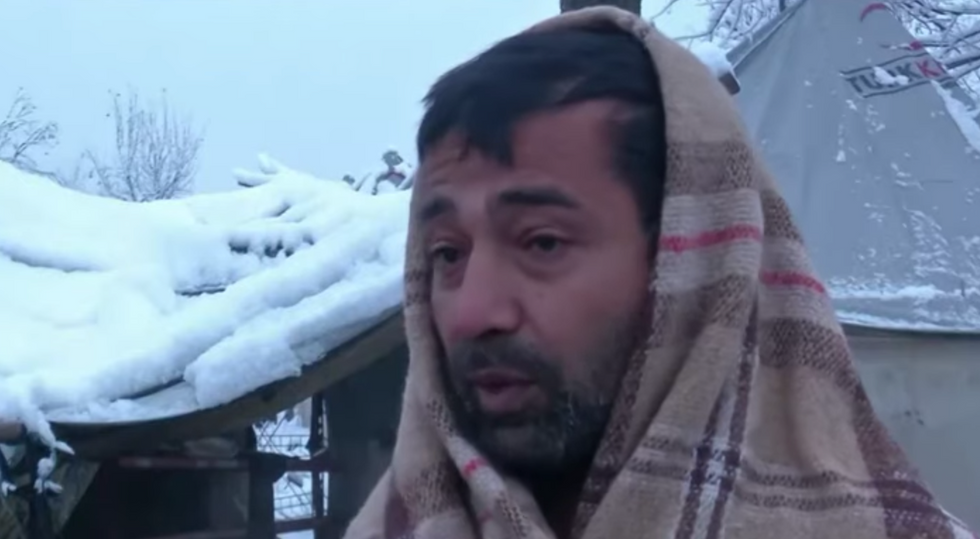 Human rights defenders and aid organizations are issuing dire warnings this week after witnessing the hellish conditions of an encampment of stranded refugees in the freezing forests of Bosnia and Herzegovina.

An envoy of officials on Tuesday visited the camp known as Vucjak—situated approximately five miles from the nearby border with Croatia in a forest that has grown atop a former landfill—where they saw hundreds of migrants huddled in leaking and drafty tents as temperatures in the region have dropped to freezing or below.

"Vucjak must be shut down today," said Dunja Mijatovic, commissioner for human rights at the Council of Europe and a member of the delegation. "Otherwise the people here will start dying."

Mijatovic said that as a citizen of Bosnia, she was "ashamed" of how the refugees were being treated, decried the conditions of the refugee camp as "not for human beings," and called for immediate relief for those languishing there.

It is hard to express just how harsh the winter in #Bosnia-#Herzegovina can be, especially for those who've fled th… https://t.co/tnFtq9KeXl
— Ian Bancroft (@Ian Bancroft) 1575457686.0

Bosnia is struggling to deal with an upsurge in migrant numbers since Croatia, Hungary and Slovenia closed their borders against undocumented immigration. The migrants hope to get to wealthy western Europe and find work there.

Some lacked warm clothes and were wrapped in blankets, some traipsed through the snow and mud in flip-flops to collect firewood. One man brushed snow from the roof of his tent to prevent it collapsing.

An 24-year-old Afghan man identified as Mauloddin, who set off from his war-torn homeland more than three years ago to seek refuge in Europe, told Reuters, "You see... it's very cold weather, (there is) no sleeping, no food."

"People are people," he added, "not animals."

Rezwanullay Niazy, also a 24-year-old Afghan, said: "We spent all our money... We came close to Europe, and now they closed the Croatian and Slovenian borders. When we go there they strike us, they hit us."