Mormons and money: An unorthodox and messy history of church finances 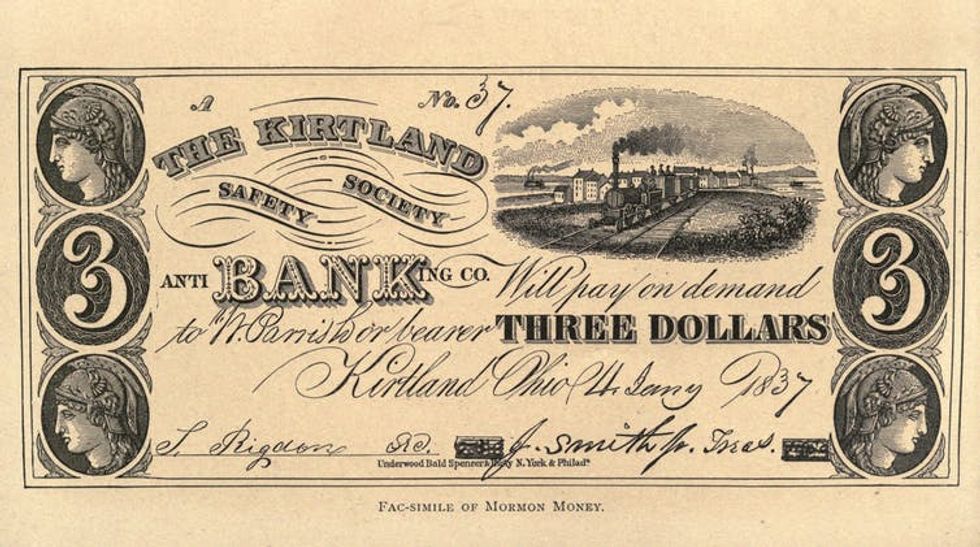 There was something fishy about this $3 bill. Everett Historical/Shutterstock.com
The Conversation
December 21, 2019

The Church of Jesus Christ of Latter-day Saints has allegedly amassed US$100 billion in purportedly charitable assets since 1997 without ever giving any money away – a possible breach of federal tax laws.

This previously unknown investment vehicle known as Ensign Peak Advisors became public knowledge when David A. Nielsen, a former employee and a member of the church, blew the whistle.

According to the Nielsens, Ensign Peak Advisors has invested the church’s annual surplus member contributions to build up a $100 billion portfolio. But the Nielsens say they could find no evidence that Ensign Peak Advisors spent a dime of this money for religious, charitable, educational or other “public” purposes as IRS rules require under most circumstances. They also allege that it diverted tax-exempt funds to finance some for-profit projects, which could also violate IRS rules banning such transactions.

If the IRS determines that the investment fund failed to act as a charity even though it benefited from tax breaks, it might find that Ensign Peak Advisors broke tax laws. If that happens, and the IRS collects back taxes, David Nielsen could receive a cut as a reward.

If the numbers are accurate, Ensign is the nation’s largest charitable endowment, with as much money as Harvard University and the Bill and Melinda Gates Foundation have at their disposal, combined, if not more.

Church leaders deny that they have violated any laws that regulate tax-exempt institutions. The church “complies with all applicable law governing our donations, investments, taxes and reserves,” said the three-member council headed by church president Russell M. Nelson.

From my vantage point as a historian of Mormonism, this news marks a new twist on an old story. For nearly two centuries, the church has conducted its finances in ways that defy the expectations Americans have for religious organizations.

Consider what happened in the summer of 1837, when his fledgling church teetered on the brink of collapse.

At the time, Joseph Smith and many church members lived in Kirtland, a small town in northeastern Ohio. The Smith family had moved there in the early 1830s, seeking a safer gathering place for church members in the face of persecution in New York state.

Smith and his followers began building a temple in Kirtland. The Saints dedicated their temple in 1836, but the project left Smith and others deep in debt. Like many communities in antebellum America, Mormon Kirtland was land-rich and cash-poor. A lack of hard currency hampered commerce.

Smith and his associates decided to start their own bank to solve their financial woes. The circulation of bank notes, they thought, would boost Kirtland’s economic prospects and make it easier for church leaders to satisfy their creditors.

The idea of Mormon leaders printing their own money wasn’t as crazy as it sounds in 2019. The United States still lacked a uniform currency. A host of institutions of varying integrity – chartered banks, unchartered banks, other businesses and even counterfeiting rings – issued notes whose acceptance depended on the confidence of citizens who might accept or refuse them.

At this point, church leaders took a more fateful and dubious step.

They had collected money from investors and had already begun printing notes of the “Kirtland Safety Society Bank.” Instead of shutting down the operation when the charter failed to come through, they doubled down. Worried about the legal risk of running an unchartered bank, church leaders altered the notes to read “anti-Banking-Co.”

For a while, all went well. “Kirtland bills are as safe as gold,” one church member wrote in January 1837. The town enjoyed a short-lived boom.

Soon, however, the anti-bank proved anything but safe. Non-Mormons questioned the society’s ability to redeem its notes, and church leaders could not keep it afloat. The Kirtland Safety Society’s struggles were not unusual. Scores of banks, including some of the nation’s largest, failed in what became the Panic of 1837. Real estate speculators lost their fortunes, and workers lost their jobs.

What made Kirtland different was the bank’s ownership. Many church members lost not only confidence in the society’s banknotes, but faith in the prophet who had signed them.

The crisis divided the church. At one point that summer, church members wielding pistols and bowie knives fought with each other in the temple. Smith and one of his top associates were convicted of issuing banknotes without a charter and fined $1,000 each. They soon fled the courts and their creditors, taking refuge with fellow church members in Missouri.

After anti-Mormon mobs forced the Latter-day Saints out of Missouri and then Illinois, Smith’s successor, Brigham Young, led thousands of church members to what became the Utah Territory.

From a railroad to a shopping mall

The church has never stopped blending commerce and religion.

In the late 1860s, Mormons built the Utah Central Railroad, which connected Salt Lake City with Ogden – a stop along the transcontinental railroad. Church leaders controlled the railway until 1878, when Union Pacific bought it.

Beginning in 1868, the church also operated the Zion’s Cooperative Mercantile Institution, a department store designed to put the squeeze on non-Mormon businesses.

The church sold the store in 1999, but in many ways its commercial interests have become more grandiose since its frontier days of railroading and retailing.

In 2003, the church’s for-profit real estate division purchased the land on which the store had stood. Nine years later, the estimated $1.5 billion City Creek Center development opened to the public, including a glitzy mall.

At the time, church officials asserted that they had not used any tithing money on the City Creek project. The church explains that tithing – the contribution of 10% of its 16 million members’ annual income – is for the construction and maintenance of church buildings, local congregational activities and the church’s educational programs. The church’s for-profit divisions handle commercial projects, including real estate and publishing.

The Nielsen brothers allege that Ensign Peak Advisors diverted $1.4 billion in tithing funds to pay for the development, a possible violation of the IRS rules that govern tax-exempt institutions.

It is impossible to confirm the accusation without greater transparency on the part of the church, which has told Newsweek that it “does not provide information about specific transactions or financial decisions.”

According to Samuel Brunson, a tax law professor, the church was more open about its ledger sheet and business arrangements during the first half of the 20th century.

Then, in the mid- to late 1950s, it lost approximately $10 million in municipal bond investments. The resulting embarrassment was one factor in the church’s decision to become less forthcoming about its finances.

In this respect, the church is not unique. U.S. laws do not require churches to disclose their financial information in much detail. While some churches do so voluntarily, others – including the Catholic Church – keep their financial and commercial interests shrouded from public view.

Saving for a ‘rainy decade’

It remains to be seen whether Ensign Peak Advisors is going to become the subject of IRS investigations.

There are, of course, ethical and moral questions in addition to legal ones. For example, should the church amass so much money? And might the church use more of its excess funds and investment gains for humanitarian purposes or to make the tuition at church-owned Brigham Young University even more affordable?

What’s also at stake is confidence in the church’s leaders. Sen. Mitt Romney, the Republican Party’s 2012 presidential nominee and the nation’s most politically influential Mormon, professed to be “happy that they’ve not only saved for a rainy day, but for a rainy decade.”

Romney’s perspective makes some historical sense, given that the most obvious problem in Kirtland, Ohio, was that Joseph Smith’s financial stewardship was decidedly unwise. At least today’s church leaders earn good returns on their investments.