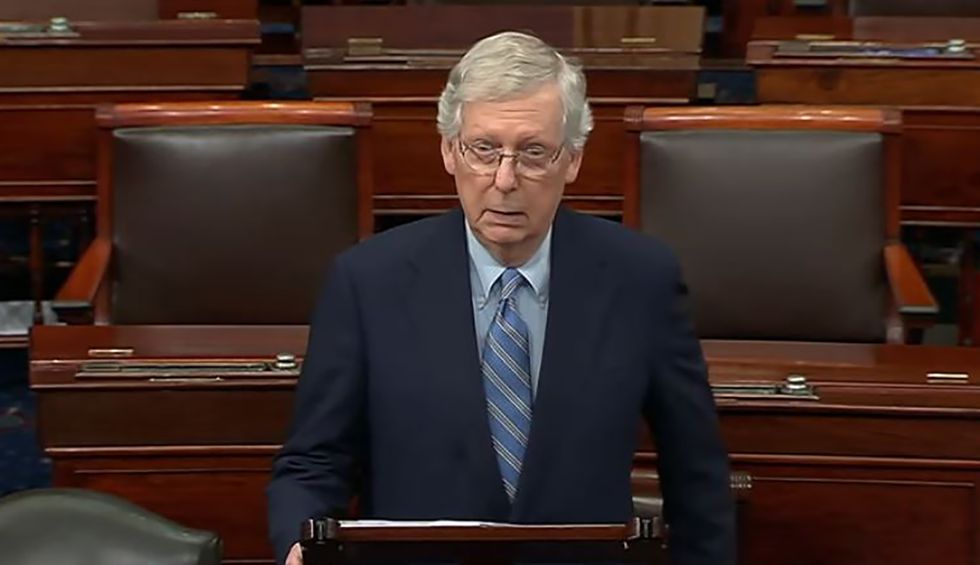 Senate Majority Leader Mitch McConnell says he wants to work out an agreement with Minority Leader Chuck Schumer for the conduct of Donald Trump's impeachment trial in the Senate. The thing is, he has yet to schedule a meeting to discuss it, and his fellow Republicans are meeting regularly with Trump's people at the White House to strategize.

So when McConnell says, as he did with reporters on Tuesday, that the "first thing Sen. Schumer and I will do is see if there's a possibility of agreement on a procedure," take that with a dollop or two of salt. This is the part to take to the bank: "That failing, I would probably come back to my own members and say: 'OK, can 51 of us agree how we're going to handle this?'" See, he's pretending like that's his "backup" plan—staging the whole thing with a Republican majority that cuts Democrats out of the loop. As usual.

There is no template for Senate impeachment hearings, beyond what it’s conducted before. But there are no constitutional restrictions on them either, and the majority has maximum flexibility in determining how it would proceed, needing just 51 votes to do so. There's an exceedingly slim possibility that McConnell loses a few votes—maybe Mitt Romney, maybe Susan Collins, maybe even Lisa Murkowski, who is, as always, staying pretty mum on the whole thing.

Meanwhile, however, two of those Republican supposed "jurors" in the trial—Romney and Collins—joined a handful of colleagues being courted by Trump, while another group has been strategizing with White House staff. The Republicans will be lunching with White House counsel Pat Cipollone in their weekly conference lunch Wednesday "as part of an ongoing effort to keep Senate Republicans informed about White House thinking," says Sen. Mike Lee's spokesperson.

The fix is most definitely in and has been for months. McConnell has baldly said that he "can't imagine a scenario" in which he abandons Trump. He is certainly not going to allow a Senate impeachment trial to be anything but a sham. That's why Democrats need to make a very, very strong case to the voters, to maximize pressure on McConnell's minions.