Media fail: The press keeps covering impeachment through the eyes of the Republican Party 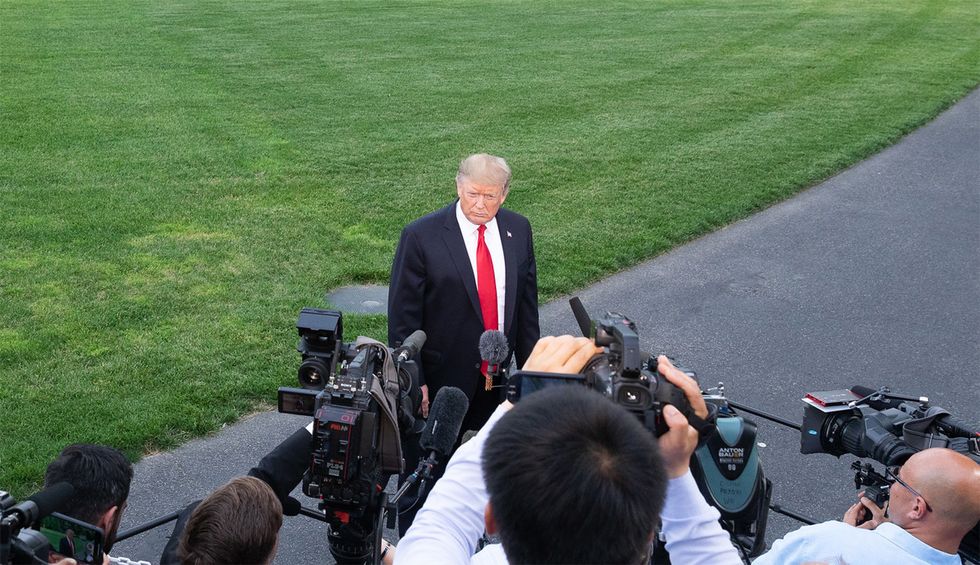 The political press corps may have hit peak impeachment failure on Sunday when Meet the Press host Chuck Todd introduced a segment in which voters from a toss-up district in Michigan were interviewed about the House proceedings against Donald Trump. Touted as a way to take the temperature of everyday voters outside of the "Beltway," the sit-down with six voters from Kent County, Michigan, offered a chance to hear from America's heartland and if its denizens "care" about impeachment. Except there was a slight problem: Every voter interviewed was a Republican, and every voter interviewed opposed impeachment. ("I don’t even care. It's just noise.")

Even more stunning was the fact that the Michigan county highlighted by Meet the Press is represented in Congress by Justin Amash who made headlines earlier this year when he left the Republican Party because of Trump's corrupt behavior, and who has since come out in favor of impeachment. Yet network news producers looked at that backdrop, and the fact that 54% of Americans support impeachment according to the most recent Fox News poll, and thought the best approach would be to only ask Republican voters how they felt about impeachment?

If that doesn't pull back the curtain on today's coverage and how it's being told literally through the eyes of the Republican Party, I don't know what does. Wedded to the Republican narrative that impeachment has put Democrats back on their heels and is boosting Trump's standing, the press in recent weeks increasingly resembled a soft landing spot for GOP spin.

On Tuesday, when Trump released an incoherent, paranoid diatribe in the form of a petulant, hate-filled six-page letter in an attempt to answer his impeachment accusers, some observers likened the screed to a would-be Unabomber manifesto, only not as well-written. But the Beltway press? They scrambled to normalize Trump's appalling behavior, describing the shocking display of pity and lies as "resilient" and "fiery."

Meanwhile, the dominant theme in recent days—and it reads like it's straight from the Republican National Committee—is that Democrats from closely divided districts face a looming backlash if they vote to remove Trump from office. But there continues to be virtually no evidence to support that.

Keep in mind Democrats just won 40 House seats last year in what many observers saw as voters rewarding the party for vowing to stand up to Trump. Additionally, Republicans under Trump have lost control of the Virginia legislature, lost 435 state legislative seats nationwide while losing control of chambers in Colorado, New York, Minnesota, New Hampshire, Washington, and Maine, and lost the governor mansions in Louisiana and Kentucky. Yet the media narrative today regarding impeachment is that Democrats standing up to Trump are in danger of … upsetting voters? It doesn't make sense. But many journalists and news organizations have adopted that hollow “Democrats in Disarray” storyline.

Stressing "the quiet hand-wringing" that consumed Democratic leaders, The Washington Post last week insisted the party was "bracing" for Democratic defections when the articles of impeachment are soon voted on by the full House. The clear message was that the Democratic strategy was failing and might soon unravel as internal dissension set it, specifically among moderate Democrats who allegedly feared a voter backlash.

Yet in the end, it looks like one Democrat out of the party's House caucus of 233 members will vote no on impeachment. So much for the "bracing" for defections storyline, and how moderate Democrats were running scared. (Hint: The fact Trump publicly admitted to pressuring a foreign government to investigate his political foe has made the impeachment vote a pretty easy one for Democrats.) In an ironic twist, it turns out the only Democratic member of Congress who clearly faces a looming backlash back home over impeachment is Rep. Jeff Van Drew of New Jersey, who has vowed to vote against removing Trump from office. After polling from his district showed Democratic voters furious over such a move, Van Drew is reportedly considering switching to the Republican Party.

And talk about viewing impeachment only through the eyes of Republicans: Last week The Washington Post published a long article on Rep. Elise Stefanik of New York, examining what the political fallout from impeachment has been for the "moderate" Republican. To determine that answer, the article  quoted three Republican officials and zero Democrats. The article quoted Stefanik, but not her Democratic opponent. The Post also interviewed the owner of a local diner who had "set up a shrine to the president—complete with a framed portrait, Trump books and a Trump doll." And guess what? After hearing mostly from Republicans, the Post concluded that impeachment has been working out just fine for the Republican congresswoman. Funny how that works.

Even when reporting on Democrats and impeachment, the framing has consistently been through a Republican prism. "On Verge Of Impeachment Vote, First-Term, Moderate Democrats Weigh A Political Risk," read a recent NPR headline, the type of which has been reproduced by scores of news outlets in recent days and revolves around GOP spin: It's Democrats who find themselves in a bind over impeachment, not Republicans. (Keep in mind, it's a Republican president being impeached.)

By the way, one reason why journalists aren't profiling first-term Republicans from swing districts to examine what the impeachment vote will mean for them is because there virtually are none. Why? Because Republicans got wiped out in those districts in 2018. And why did they get wiped out, especially in the suburbs? Because Trump remains deeply unpopular. Yet against that backdrop, the media claims it's Democrats who are on the defensive?

Half the country supports removing Republican Trump, the most consistently unpopular president in American history, and the press scrambles to explain why that's a problem for Democrats. January will feature the impeachment trial in the Senate. That means journalists still have time to stop telling the impeachment story through the eyes of the GOP.