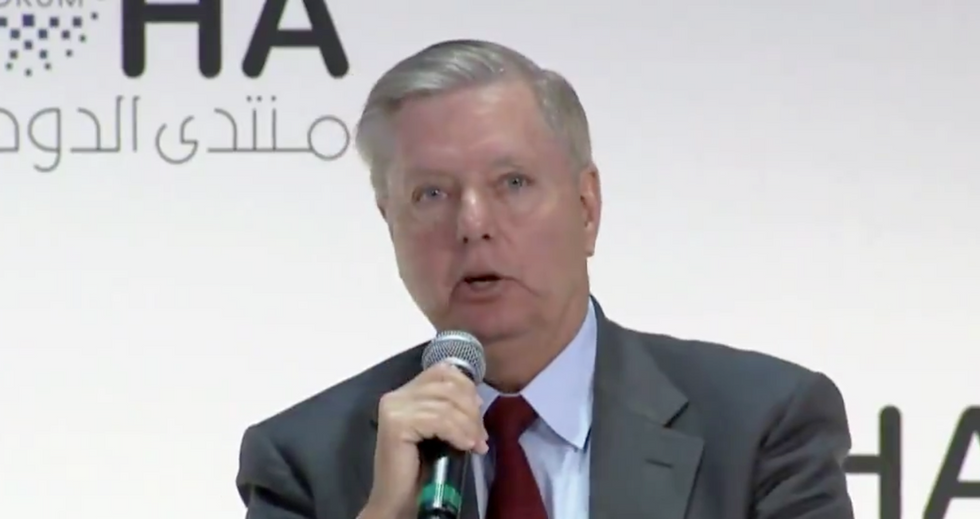 Sen. Lindsey Graham (R-SC) drew sharp criticism at the Doha Forum on Saturday when he made clear that — despite the oath he's expected to take at a forthcoming impeachment trial in the Senate — he doesn't have any plans to keep an open mind or act as an "impartial" juror regarding the conduct of President Donald Trump.

But another section of his comments that didn't gain as much attention is in some ways even more damning. The interviewer pressed him on the nature of Trump's conduct in the Ukraine scandal, saying: "Is it OK... ever OK for an American president to ask a foreign leader to investigate a political rival?"

Graham, and everyone else, knows that this is exactly what Trump did. And had Trump not done it, there would be universal agreement that it was wrong. So when Graham answered, he shamefully phrased his response to avoid giving a direct answer, while trying to sound as if he was exonerating the president.

"I think being a political rival is a not a — you can't ever be asked questions," Graham said.

Of course, no one ever said Biden couldn't be asked questions. What has been said, repeatedly and exhaustively, is that it's improper and wrong for Trump to ask for or demand an investigation of his political rival because it's a conflict of interest. And since he's the U.S. president, there will inevitably be either real or perceived pressure for investigators to pursue the matter, even if there's no basis for an investigation. Getting a foreign government involved in the scheme just exacerbates the problem.

Graham continued to say that Biden is a "dear friend" — even while enabling Trump's abuses of that friend. Then he repeated the debunked claim that Biden had asked for a Ukrainian prosecutor to be fired just two months after the home of the owner of Burisma, where Biden's son worked, had his home raided. As the Washington Post has reported, this claim is a gross distortion of the facts.

Graham added: "Yeah, I think it's okay to talk about this kind of stuff."

And yet again, no one said it's not "okay to talk about this kind of stuff." What's wrong is a president using his office to pressure another country into starting an investigation of his political rival. And while Graham refused to say directly that he thinks that's appropriate, he carefully chose his words to give the impression that Trump did nothing wrong.

It was transparent what he was doing, showing just how aware Graham is that what he's defending is, when addressed directly, indefensible.