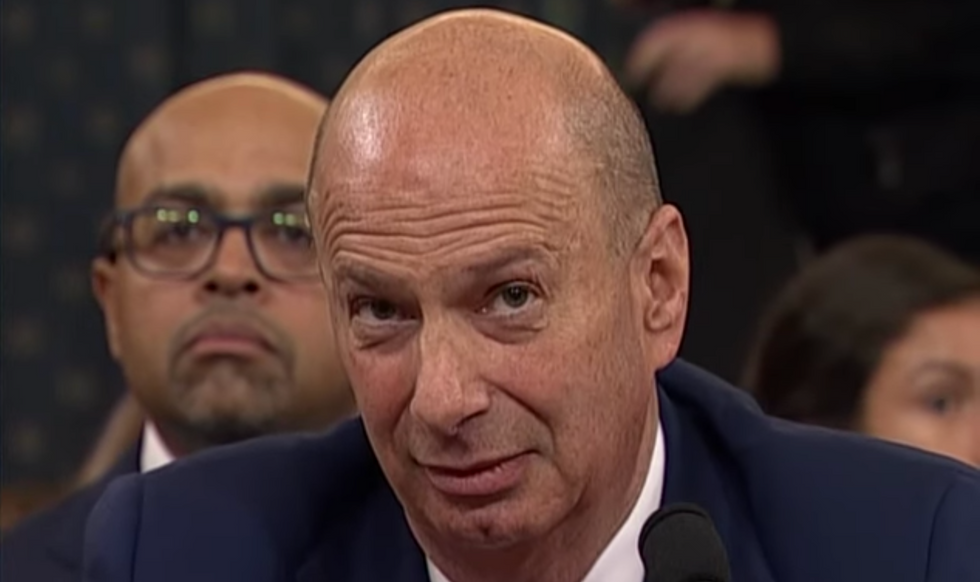 Stanford Law School professor Pamela Karlan on Wednesday told House impeachment investigators that the "most chilling" evidence that President Donald Trump was pursuing his own political gain in Ukraine came from the November 20 testimony of Gordon Sondland, the U.S. Ambassador to the European Union.

The "most striking" line from the witness testimony, said Karlan, was Sondland's claim that Trump did not care whether Ukrainian President Volodymyr Zelensky actually opened an investigation into former Vice President Joe Biden.

"He had to announce the investigations. He didn't actually have to do them, as I understood it," Sondland told impeachment investigators last month. "The only thing I heard from [Trump's personal attorney Rudy] Giuliani or otherwise was that they had to be announced in some form, and that form kept changing."

Karlan told the Judiciary Committee that Sondland's testimony undermines the Republican narrative that Trump's behavior toward Ukraine stemmed from geniune concerns about corruption.

"What I took that to mean was this was not about whether Vice President Biden actually committed corruption or not," Karlan said. "This was about injuring somebody who the president thinks of as a particularly hard opponent. That's for his private beliefs."

"There's a lot to suggest here that this was about political benefit," Karlan added. "What the Constitution cares about is that we have free elections. And so it is only in the president's interest, it is not the national interest, that a particular president be elected or be defeated at the next election. The Constitution is indifferent to that."

Three of the four legal scholars who testified Wednesday, including Karlan, said they believe Trump committed the "impeachable high crime and misdemeanor of abuse of power" by soliciting Ukrainian interference in the 2020 presidential election.

The lone outlier was George Washington University professor Jonathan Turley, who was called to testify by Republicans on the House Judiciary Committee.

During her opening remarks (pdf), Karlan said the evidence that has emerged from the House impeachment inquiry into Trump "reveals a president who used the powers of his office to demand that a foreign government participate in undermining a competing candidate for the presidency."

"And it shows a president who did this to strong-arm a foreign leader into smearing one of the president's opponents in our ongoing election season," said Karlan. "Put simply, a candidate for president should resist foreign interference in our elections, not demand it. If we are to keep faith with the Constitution and our Republic, President Trump must be held to account."

Karlan asked viewers to "imagine living in a part of Louisiana or Texas that's prone to devastating hurricanes and flooding."

"What would you think if you lived there and your governor asked for a meeting with the president to discuss getting disaster aid that Congress has provided for?" Karlan asked. "What would you think if that president said, 'I would like you to do us a favor? I'll meet with you, and send the disaster relief, once you brand my opponent a criminal.'"

Impeachment HQ, a joint project of progressive groups Stand Up America and Defend the Republic, said in an email to supporters Wednesday that the first impeachment hearing in the House Judiciary Committee "has been absolutely devastating for Donald Trump."