Here are 5 of Donald Trump's most appalling scandals of 2019 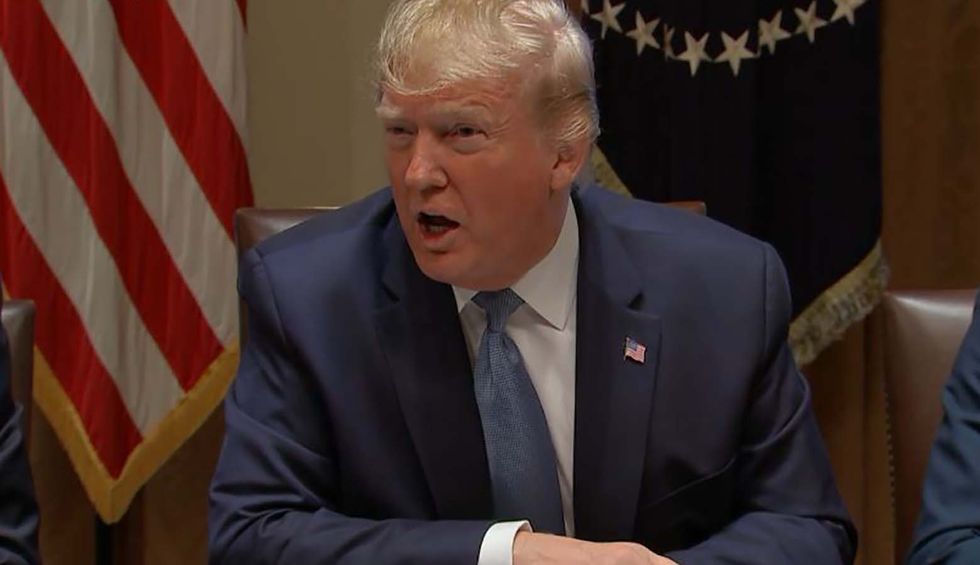 Donald Trump has often been described as the most scandal-ridden U.S. president since Richard Nixon, yet in many respects, he is worse — more vindictive, more corrupt, and even quicker to demonize his enemies. Just when one Trump-related scandal starts to disappear from the headlines, another one emerges. And that was certainly true in 2019. It remains to be seen whether or not Trump will win a second term in 2020, but one thing’s for certain: in 2019, Trump gave the United States many reasons why he shouldn’t be reelected.

Here are some of Trump’s worst scandals of 2019.

When former Special Counsel Robert Mueller delivered the final report for his Russia investigation, Trump — with the help of Attorney General Bill Barr — insisted that the Mueller Report was a total vindication, and his “no collusion, no obstruction” talking point was echoed endlessly by his allies at Fox News. But Trump mischaracterized the report. Mueller, according to his report, found that the 2016 Trump campaign’s interactions with Russians — although questionable — did not rise to the level of a full-fledged criminal conspiracy. But the operative word is “questionable.” While Mueller made it clear that he didn’t consider Trump a spy, his 2016 campaign manager, Paul Manafort, was hardly squeaky clean and had a long history of doing business with corrupt Russian oligarchs. And in June 2016, Manafort (along with Donald Trump, Jr. and Jared Kushner) was happy to meet with Russian lawyer and Kremlin ally Natalia Veselnitskaya at Trump Tower in the hope of obtaining dirt on Hillary Clinton.

Mueller stated that because of the U.S. Department of Justice (DOJ) policy against indicting a sitting president, Trump could not be charged with obstruction of justice — and therefore, it was up to Congress to read his report and draw their conclusions. The Mueller Report makes a strong case for obstruction, showing that Trump went to great lengths to fight Mueller’s investigation.

2. The Ukraine scandal and impeachment

The Mueller Report, in a sense, was a “get out of jail free” card for Trump. House Speaker Nancy Pelosi did not want to pursue impeachment even though other Democrats in the House argued that the Mueller Report made a strong case for impeaching Trump for trying to obstruct Mueller’s investigation. But Trump couldn’t let well enough alone, and Pelosi changed her mind about impeachment because of the Ukraine scandal and evidence that Trump, on July 25, tried to pressure Ukrainian President Volodymyr Zelensky into investigating former Vice President Joe Biden and his son, Hunter Biden. Moreover, House Democrats asserted, Trump made an investigation of the Bidens a condition of military aid to Ukraine — which was withheld.

Pelosi, after months of resisting impeachment, decided that that Ukrainegate was too egregious for her to resist it any longer. And on December 18, the U.S. House of Representatives indicted Trump on two articles of impeachment: one for abuse of power, the other for obstruction of Congress.

3. Trump’s racist attack on The Squad

In July, Trump tweeted that the four non-white congresswomen known as The Squad — Rep. Alexandria Ocasio-Cortez of New York City, Rep. Ilhan Omar of Minnesota, Rep. Ayanna Pressley of Massachusetts and Rep. Rashida Tlaib of Michigan — should go back to the countries they originally came from. But of the four, only Omar (a Somali refugee who obtained U.S. citizenship in 2000) was born outside the U.S.: Ocasio-Cortez, Pressley and Tlaib are all lifelong U.S. citizens. Trump’s overtly racist assertion set off a major controversy, and at MAGA rallies, his far-right supporters began chanting, “Send her back, send her back” in reference to Omar.

When I call the president a racist, this is what I'm talking about We must stand together for justice and dignity… https://t.co/Hkemw6pxQQ
— Bernie Sanders (@Bernie Sanders) 1563115228.0

4. The imprisonment or prosecution of Trump’s closest allies

Veteran broadcast journalist Dan Rather has described the list of Trump allies who have faced criminal charges as the president’s “flock of felons” — and that list includes Manafort (Trump’s former campaign manager), Michael Cohen (his former personal attorney), and veteran GOP operative Roger Stone (a long-time confidant), among others. Cohen is now serving a three-year federal prison sentence for charges ranging from tax fraud to campaign finance violations, while Manafort is serving seven and one-half years in federal prison for tax evasion, obstruction of justice and other offenses. And in November, Stone was convicted on seven criminal counts, including lying to Congress and witness tampering (he has yet to be sentenced). Meanwhile, Michael Flynn (who briefly served as national security adviser in the Trump Administration in 2017) pled guilty to lying to the FBI and has a January 28, 2020 sentencing date.

5. The withdrawal of US troops from Syria

Speaker Pelosi and Sen. Lindsey Graham (almost always a vigorous defender of Trump) seldom agree on much of anything, but one thing they do agree on is that Trump’s decision to withdraw U.S. troops from northeastern Syria and abandon the United States’ Kurdish allies in that region was an incredibly bad one. Kurdish-led forces had been guarding prisoners associated with the terrorist organization ISIS (Islamic State, Iraq and Syria), and critics of the withdrawal fear that ISIS could have a resurgence in the region. ISIS is so vicious that even al-Qaeda and the Taliban have been critical of their violent methods, which is saying a lot.