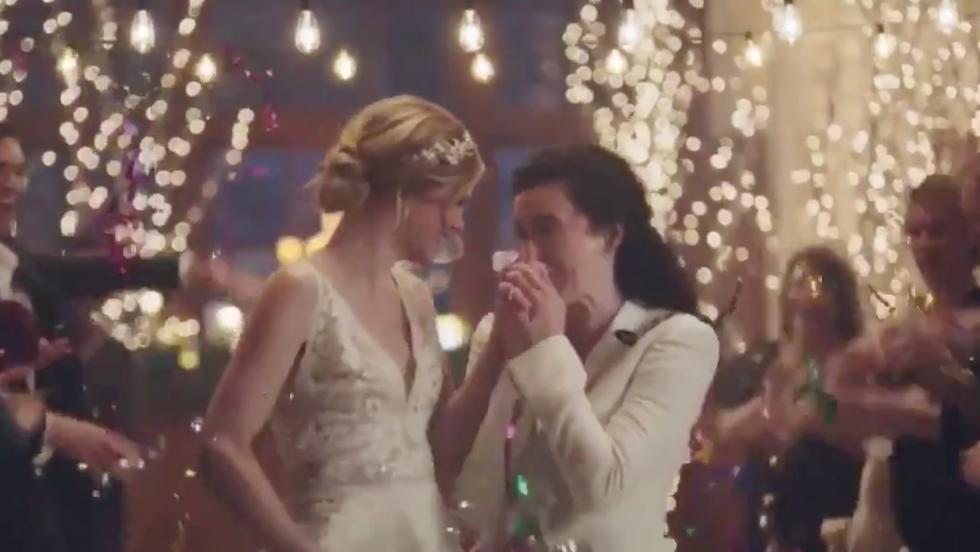 The Hallmark Channel dropped four ads for the wedding planning website Zola because conservatives expressed horror at the sight of same-sex couples kissing in the commercials. Zola originally had four ads that featured two brides kissing each other. Zola also has two ads that feature a bride and groom kissing, and those, notably, were still allowed to run on the channel.

One Million Moms published an online petition calling for the ads to be removed. The petition soon gathered about 25,000 signatures. Interestingly, the organization updated its petition saying it had “personally” spoken with the CEO of Crown Media Networks, Bill Abbott.

“The decision not to air overt public displays of affection in our sponsored advertisement, regardless of the participants, is in line with our current policy, which includes not featuring political advertisements, offensive language, R-rated movie content and many other categories,” a Hallmark Channel spokesperson told The New York Times.

Again: The two Zola ads that feature a bride and groom kissing at the altar weren’t pulled from the channel. In response to Hallmark’s move, Zola decided it simply won’t run any of the ads on the network.

“Hallmark approved a commercial where a heterosexual couple kissed. All kisses, couples and marriages are equal celebrations of love and we will no longer be advertising on Hallmark,” Zola’s chief marketing officer Mike Chi said in a statement.

“The debate surrounding these commercials on all sides was distracting from the purpose of our network, which is to provide entertainment value,” a Hallmark spokesperson explained in an email to CNBC. The spokesperson clarified to CNBC that Hallmark’s parent company, Crown Media Family Networks, made the decision to pull the ads.

Molly Biwer, senior vice president for public affairs and communications at Hallmark, offered a similar sentiment to the Associated Press in a statement. “The Hallmark brand is never going to be divisive. We don’t want to generate controversy, we’ve tried very hard to stay out of it,” Biwer stated. “We just felt it was in the best interest of the brand to pull them and not continue to generate controversy.”

Many people on social media are horrified, and some are calling for a boycott of the Hallmark Channel.

Hallmark pulled this from airing when homophobes complained it was "not suitable for children" for showing a same g… https://t.co/APvqjFbOEy
— Bi-Trans Alliance (@Bi-Trans Alliance)1576417805.0

Gentle reminder to all the conservative white snowflakes out there that Jesus was brown and he’d be perfectly fine… https://t.co/z2EARNyPUA
— Eugene Gu, MD (@Eugene Gu, MD)1576426797.0

It's disgusting that, of all organizations to cave to, @hallmarkchannel caved to hate group One Million Moms.… https://t.co/488YEWFBTj
— Ashton Pittman (@Ashton Pittman)1576395053.0

By the way, here is one of the ads which apparently caused deep horror.

Homophobia is clearly the issue here. Another layer to it is that same-sex couples (and particularly female same-sex couples) are often overly sexualized in negative cultural discourse. For decades, homophobes have suggested that LGBTQ people are dangerous, sexual predators; or, on the flip, confused, highly sexual people putting on a performance to tantalize. Either way, the idea that same-sex couples are not as valid or appropriate as opposite-sex couples continues to be deeply embedded in some people’s skulls, regardless of the fact that same-sex marriage (and some related recognitions) is the law of the land.