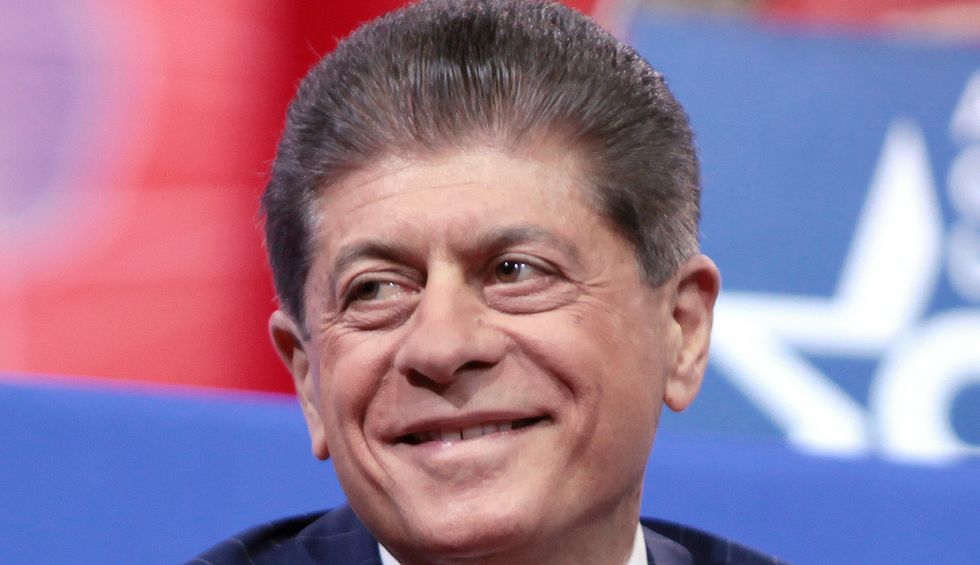 Fox News Judge Andrew Napolitano declared Wednesday that he would "certainly" vote to impeach President Donald Trump if he was a member of Congress.

During an appearance on "America's Newsroom," Napolitano asserted his belief that "the Democrats have credibly argued that [Trump] committed impeachable offenses" in the Ukraine scandal.

"The easiest one — because this existed in Andrew Johnson, Richard Nixon and Bill Clinton — is obstruction of Congress," he said. "So — by directing his subordinates to refuse to comply with lawfully issued subpoenas, whether it's for testimony or for documents — that's an impeachable offense."

Napolitano continued, "We know that from history, every time the House of Representatives has looked at that with respect to a president. It has found it to be impeachable. On that, reasonable minds cannot disagree without rejecting history and without rejecting constitutional norms."

At the heart of the impeachment inquiry are allegations that Trump attempted to leverage a White House meeting and millions in military aid, sought by Ukraine in the face of Russian aggression, to pressure Ukrainian President Volodymyr Zelensky to investigate former Vice President Joe Biden and his son, Hunter, as well as an unsubstantiated theory that the Ukrainian government had conspired with Democrats to interfere in the 2016 presidential election.

On Wednesday, Fox News host Bill Hemmer asked Napolitano, "If you were in the House, would you vote for impeachment?"

"I certainly would. I'm never going to be in the House," Napolitano said with a laugh, before adding, "I would on that count."

The judge went on to note that "reasonable minds" could disagree on Trump's reasoning for withholding million in military aid for Ukraine which had been approved by Congress.

"What was the president's intent when he held up this aid?" Napolitano asked. "Was it truly to eradicate corruption in Ukraine? Was he truly concerned that American taxpayer dollars would go into the hands of crooks? Or was he looking to use the instruments of a foreign government to help his political campaign?"

Later on in the show, Napolitano weighed in on the House Judiciary Committee's Wednesday hearing in the impeachment inquiry, saying that it likely would not change public opinion. However, he warned that "letting Trump be Trump is not good enough under the Constitution."

"We don't lower the bar because the president has unorthodox ways," the former judge added. "The bar is intentionally broad and even ambiguous as to what high crimes and misdemeanors are. We learned today that the Democrats apparently intend to include in there things we didn't know they were going to include, like bribery, like the obstruction of justice allegations which were made by (former special counsel) Bob Mueller long before the Ukraine case came to the public's attention."

At Wednesday's hearing, the House Judiciary Committee, which has jurisdiction over drafting articles of impeachment, heard testimony from four constitutional scholars about the legal and historical underpinnings of the process. Three law experts called by Democrats said Trump committed impeachable offenses, while one called by Republicans offered the lone dissent.

Also at Wednesday's hearing, the panel's chairman, Rep. Jerry Nadler, D-N.Y., suggested that issues in Mueller's report into Russian interference in the 2016 election could be included in eventual articles of impeachment. Nadler argued that Trump had obstructed justice both during Mueller's investigation and the House's impeachment inquiry.

In his opening statement, Nadler said Trump's latest actions showed a "pattern of conduct" seen since his first year in the Oval Office.

"When his own Department of Justice tried to uncover the extent to which a foreign government had broken our laws, President Trump took extraordinary and unprecedented steps to obstruct the investigation, including ignoring subpoenas, ordering the creation of false records and publicly attacking and intimidating witnesses," he said. "Then, as now, this administration's level of obstruction is without precedent."