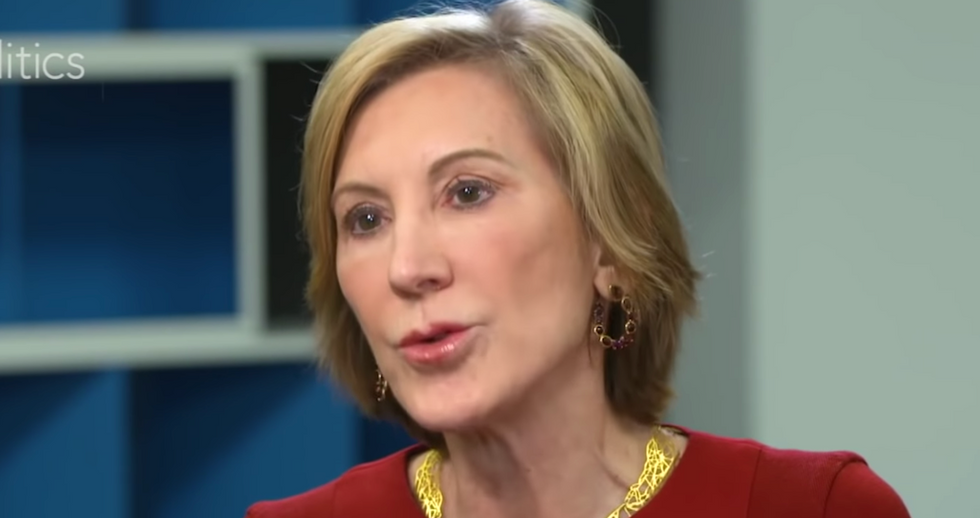 If you don’t remember Carly Fiorina and her pointless run for the Republican Party’s presidential nomination in 2015, then all I can say is I’m sorry for reminding you. Fiorina was the terrible mismanaging former CEO of Hewlett-Packard, with no scruples, a frequently incoherent tendency for double speak on all kinds of subjects, and zero charisma who appeared alongside other Republican stoolies such as John Kasich, Ted Cruz, Jeb Bush, and some damp blanket from Florida in 2015. She still wants to win some kind of elected office and clearly realizes she needs to get some time in front of microphones.

Speaking in an interview with CNN on Monday, Fiorina explained that she believes Donald Trump should be impeached. In fact, she used the term “vital.” Asked if she would vote for impeachment had she succeeded in her failed campaign to become senator of Virginia in 2017, this is what she had to say:

CARLY FIORINA: I think it is vital that he be impeached. Whether removed from office this close to an election, I don’t know. But I think the conduct is impeachable.

That’s a verbatim transcription of what Fiorina said. You can watch below if you are having a hard time following the logic. But don’t you worry: If you think you have a handle on Fiorina and the Republican Party’s logic, buckle up, because Fiorina isn’t finished explaining herself.

First, Fiorina goes on a tangent into her bread-and-butter platform of how Democratic voters love abortions and are disrespectful to forced-birther types. She’s attempting to say it’s too bad that things have become so partisan when it’s the “principles” of Trump’s obstruction of justice and abuse of power that should be paramount. Of course, she’s painting that politicization of the impeachment process as equally bad by both parties, even though there is literally only one political party not participating in the “principles” of this impeachment inquiry.

She runs in a few circles, explaining how the Republican Party has lost its way while it is supposed to be the “Party of Lincoln,” and that both the Democratic Party and Republican Party are only interested in winning. Okaaaaaay. Pressed on her initial point (that Donald Trump must be impeached) and asked if she would vote for Trump in 2020, Fiorina gives hers and the Republican voting base’s coup de grâce in regards to their “principles.”

FIORINA: Honestly, it depends on who the Democrats put up, and I won’t go any further than that.

If the Democratic Party decided to put up an exploding cigar as their candidate, it would still be a safer bet for our country’s prosperity than Donald Trump. Voting for an old brick would raise the IQ of the White House. Fiorina’s very word-salady response is another symptom of a political party rotted from the inside out by corruption.