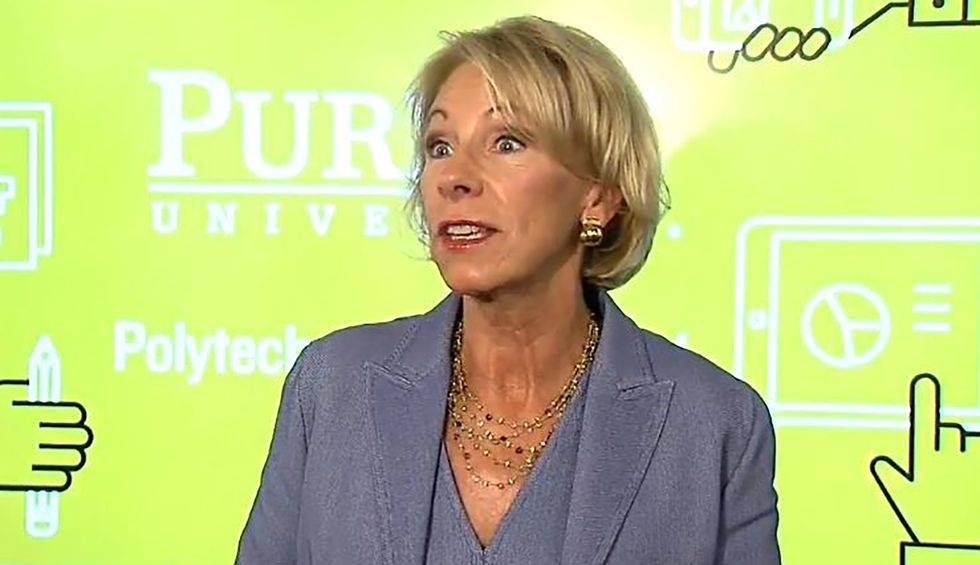 Billionaire Education Secretary Betsy DeVos this week proposed handing over the federal government's $1.5 trillion student loan portfolio to a "stand-alone government corporation," a move observers condemned as a corrupt ploy to strip the next president of the ability to cancel student loan debt.

"This very much appears to be a Betsy DeVos scheme to block the next president from unilaterally forgiving federal student debt, which she is well aware a president could do without Congress," The Intercept's Ryan Grim wrote in a series of tweets late Wednesday. "The DeVos family is heavily invested in the student loan industry and this is just flat-out corruption."

"One has to wonder: why isn't Federal Student Aid a stand-alone government corporation, run by a professional, expert, and apolitical Board of Governors?" DeVos tweeted Tuesday. "A separate Federal Student Aid would be better positioned to deliver world-class service to students and their families as they finance higher education."

Devos' proposal, which has not been fully developed, came weeks after she was held in contempt of court failing to comply with an order to stop collecting loan payments from former students of a defunct for-profit college company that defrauded tens of thousands of borrowers.

The Department of Education admitted in a court filing Monday that it improperly attempted to collect student loan payments from 45,000 borrowers, far more than the department originally estimated.

As the New York Times reported Tuesday, during DeVos' tenure as Education Secretary, "a program to relieve the debts of teachers, police officers and others who work in public-service jobs has become a bureaucratic disaster, rejecting nearly all who apply. The department allowed a troubled for-profit chain, Dream Center Education Holdings, to collect millions of dollars in federal funds that it was ineligible to receive before it collapsed this year."