Everyone is baffled by Trump’s rambling rant about water and flushing toilets '10 times, 15 times' 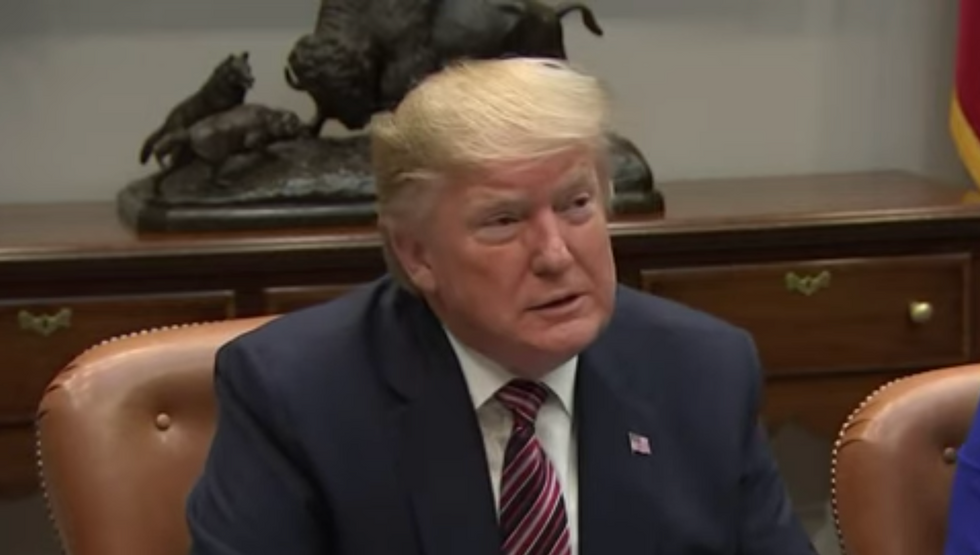 Speaking at a White House meeting on Friday about small business and regulation, Trump went on one of his trademark riffs, touching on a number of subjects with the clarity of a muddy puddle. He seemed to be referring to a series of complaints that have been raised over the years about various consumer product regulations (a favorite topic of Republican Sen. Rand Paul of Kentucky) but without making a coherent point about any of them.

Read the whole stream of consciousness rant to get a sense of what it was like:

The light bulb — they got rid of the light bulb that people got used to. The new bulb is many times more expensive and — I hate to say it — it doesn’t make you look as good. Of course, being a vain person, that’s very important to me. It’s like — it gives you an orange look. I don’t want an orange look. Has anyone noticed that? So we’ll have to change those bulbs in at least a couple rooms where I am in the White House. ... We have a situation where we’re looking very strongly at sinks and showers. And other elements of bathrooms — where you turn the faucet on, in areas where there’s tremendous amounts of water, where the water rushes out to sea because you could never handle it — and you don’t get any water. You turn on the faucet and you don’t get any water. They take a shower and water comes dripping out, just dripping out, very quietly, dripping out. People are flushing toilets 10 times, 15 times, as opposed to once. They end up using more water. So EPA is looking at that very strongly, at my suggestion. You go into a new building, or a new house or a new home, and they have standards where you don’t get water. You can’t wash your hands practically, so little water comes out of the faucet. And the end result is you leave the faucet on and it takes you much longer to wash your hands. .. For the most part. you have many states where they have so much water, it comes down — it’s called rain. They don’t know what to do with it. ... A lot of things we do are based on common sense. If I didn’t get elected you wouldn’t have a steel industry. ... We weren't going to have a steel industry.

So there's a lot going on here, so much so that we might have to leave it to the historians to unravel what he's on about. Clearly, Trump seems to be referring to things he's heard about or discussed over the years or in meetings but with little comprehension. While he lists a series of consumer complaints, he isn't able to actually point to any specific regulations that they are the result of, or how those regulations were developed or could be improved.

Many observers zeroed in on Trump's claim about flushing toilets "10 times, 15 times," a particularly absurd and comical remark:

Writing for New York Magazine, Josh Barro did the world the favor of explaining what Trump seemed to be talking about, and why he is, in fact, wrong regardless:

President Trump’s attitudes and fixations often seem stuck in the 1980s, so perhaps it’s a step forward that he issued this very 1990s gripe. What the president said is not true anymore. But ‘90s kids know it used to be true — okay, not literally true that you had to flush ten times, but true enough in the sense that the first generation of low-flush toilets, introduced when the regulation capping toilet flushes at 1.6 gallons per flush came into effect in 1994, worked poorly and often required multiple flushes.

Barro continued: "But that was then, and in the intervening two decades, there have been major advances in toilet technology. Now, as far as I can tell, toilets are just as good at clearing the bowl with 1.6 gallons of water as they used to be with 3.5 gallons of water. Modern toilets address the problem that less water means less power by finding ways other than volume to increase flush power, or by reducing the amount of force needed to clear the bowl."

He added: "Far from being an example of regulation run amok, the history of low-flush toilets is a demonstration of how private enterprises successfully innovate to follow new rules while preserving the customer experience."