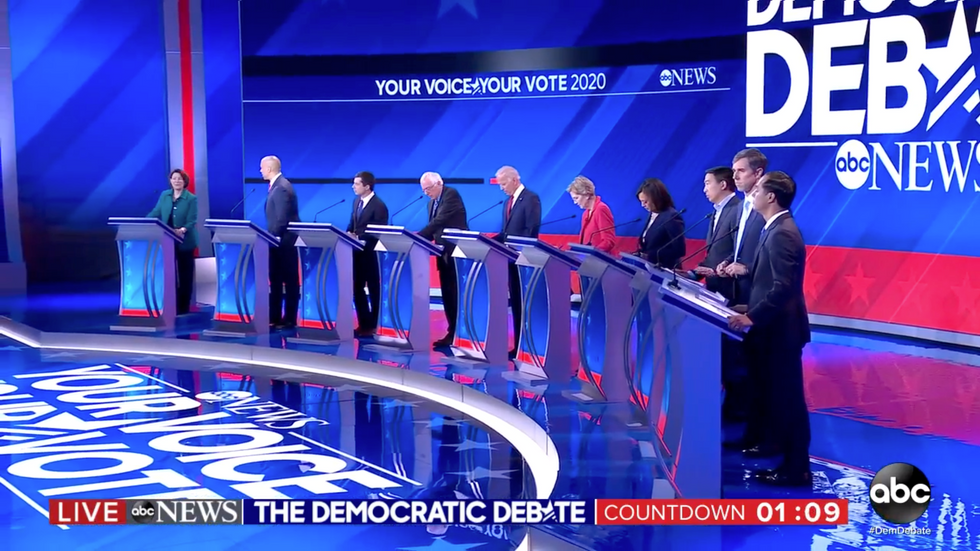 Four days after the seven Democratic presidential primary candidates scheduled to appear on the Loyola Marymount University debate stage all announced their support for striking workers at the school, the employees' union announced it had reached a tentative deal on a contract—allowing the debate to go forward.

About 150 workers at LMU, which is located in Los Angeles, are set to receive 25% pay raises, a 50% drop in healthcare costs, and more job security in the three-year tentative deal, according to the Los Angeles Times.

Sen. Elizabeth Warren (D-Mass.) was the first candidate to announce on Friday that she would not cross the picket line if LMU workers, represented by Unite Here Local 11, went on strike Thursday. Sen. Bernie Sanders (I-Vt.) made a similar announcement shortly after, followed by the five other candidates who have qualified for the debate.

"I am thrilled that we were able to reach an agreement, and that the candidate debate can continue as scheduled," said Angela Fisher, a prep cook at the university. "I want to thank the Democratic candidates who stood with us and the Democratic party that helped us win."

A local Indivisible chapter also credited the Democratic candidates for "sticking to their principles to help motivate a solution."

Thanks to the Dem presidential candidates for sticking to their principles to help motivate a solution. And to LMU,… https://t.co/brPGQLOgH0
— Indivisible CA-33 (@Indivisible CA-33)1576605362.0

Dishwashers, servers, and other food service workers at LMU have been working since March under an expired contract and spent months negotiating with Sodexo, the global company that employs them.

After the candidates threatened to drop out of the debate, Democratic National Committee Chairman Tom Perez reportedly spent the weekend in talks with Sodexo, LMU, and Unite Here Local 11.

"Every worker deserves fair wages and benefits," Perez said in a statement. "That's why I was proud to help bring all stakeholders to the table, including Unite Here Local 11, Sodexo, and Loyola Marymount University to reach a deal that meets their needs and supports workers."

Warren's campaign said the senator would join union members at a press conference at 1:15pm Pacific time Tuesday to discuss the deal they had reached.