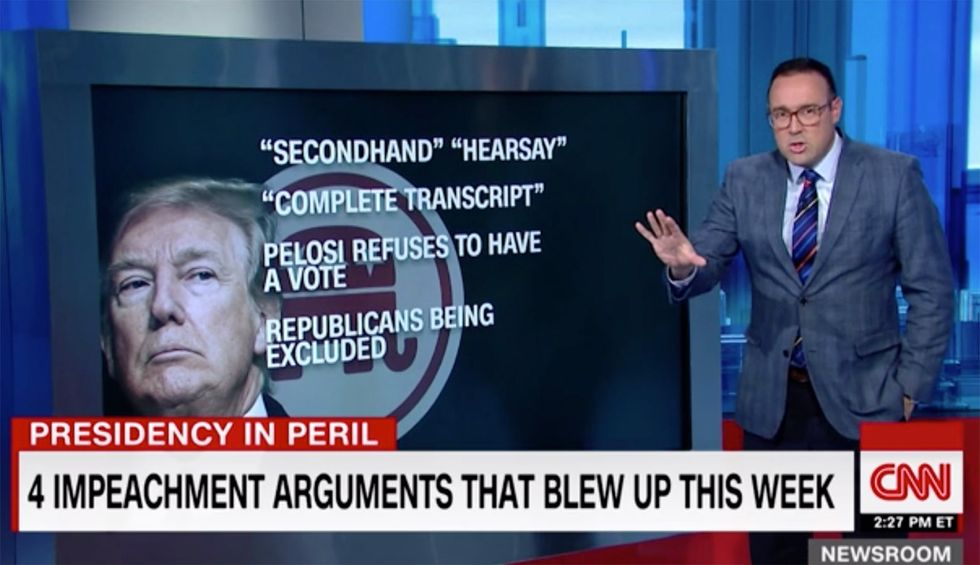 It's “An Awful Day for Washington,” is the title. Not "it’s an awful day for the American people when one political party collectively and with a straight face says two plus two equals five, and for reasons that seem obvious, the other party refuses to accept that as the truth.”

Not—“it’s an awful day when a political party collectively hides behind conspiracy theories generated out of whole cloth, defying the considered judgment of every arm of U.S. intelligence, to echo and amplify a fantasy theme whose origins lie deep in the bowels of the Kremlin.”

Not—“it’s an awful day when one political party relies on volume after volume of sworn witness testimony and documentary evidence, and the other party pretends those things simply don’t exist,  choosing instead to scream and shout sheer nonsense.”

Not—“it’s an awful day when one political party treats its solemn oath to uphold the Constitution like a drunken promise made to a prostitute.”

No, for Chris Cillizza, it’s an “awful day for Washington.” Because, you know, both sides were just awful. The worst of the worst.

The only thing the two sides ever seemed to agree on was that this was a big day in Washington (and the world) -- and that there would be long-lasting consequences from how each of them voted. Republicans repeatedly warned Democrats they could kiss their House majority goodbye in the 2020 election. Democrats told Republicans that history would judge them very poorly for their support of a corrupt President.
The Point: This was Washington at its absolute worst. A real low point for a congressional body that has seen a lot of them over the past few years.

Chris Cillizza and his ilk are a big part of the reason we are where we are today--this blind insistence by so-called “mainstream” journalists that some magical compromise or common ground can be found between a political party that swears up and down that two and two equals five, and a party that says, no, that simply isn’t true. And the unspoken implication that somehow all will be well and good if the Democrats would just concede—just this once-- that two and two does, sometimes, make five.

But they can’t do that. Because that is insanity.

So when Cillizza bemoans what he witnessed today—indeed, what we’ve all witnessed over the past two months—as “Washington at its absolute worst,” well, he’s missing the major point. Perhaps deliberately, perhaps owing to some misplaced fealty to an “objectivity” that just doesn’t apply when one political party engages in collective self-delusion and fantasy while the other remains firmly grounded in reality.

Whatever the reason, it does his readers—and to a larger extent the whole country, a grave disservice. There is nothing more corrosive and toxic to our politics than encouraging cynicism towards the Constitutional process, and that is exactly what blaming this impeachment on “Washington”-- instead of Donald Trump and the Republican Party who enabled his actions-- does.

Here, one party is standing up for the rule of law, while the other party is actively and intentionally enabling total, absolute lawlessness. There is no legitimate “comparison” between the behavior of each party here that can or should be made.

Cillizza’s job is to interpret and tell the truth, not to conjure up platitudes based on false equivalences. If he can’t do that, he and the rest of his Beltway “both-sider” friends should look for another line of work.