CNN has yet another GOP problem 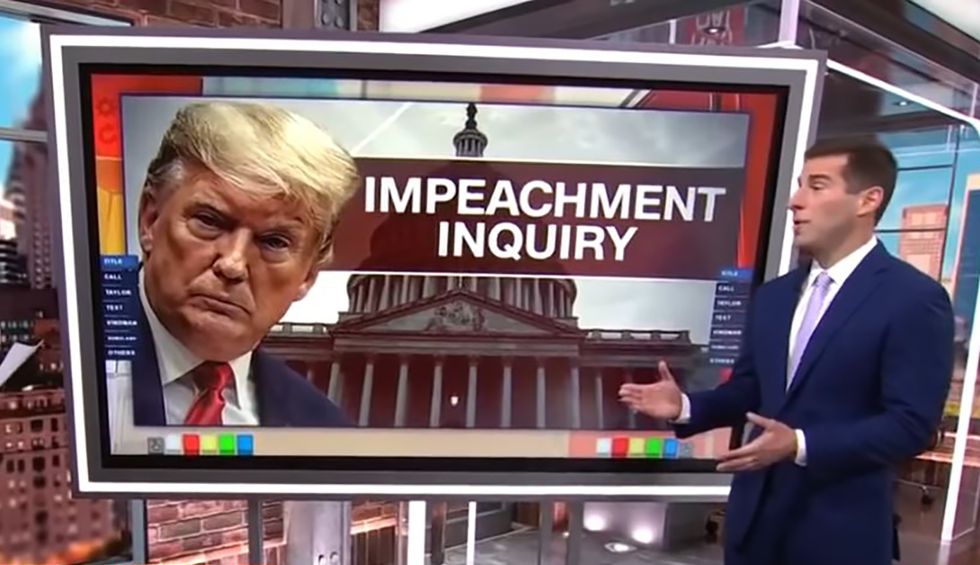 Last winter, CNN for weeks stood by its extraordinary and inexplicable decision to hire Sarah Isgur Flores, a career Republican Party operative with absolutely no journalism experience, to be the network’s political editor. A hardcore partisan, Isgur spent her career spinning for Republicans such as Ted Cruz, Mitt Romney, and Carly Fiorina. Until last year, Isgur worked as a spokesperson for then-Attorney General Jeff Sessions’ Department of Justice. CNN staffers were reportedly demoralized by the Isgur move—and for good reason, since CNN political editors should be journalists, period.

If CNN wants to hire conservatives like Isgur to go on camera and bolster Trump talking points, that's the network's choice. But to hire someone with Isgur's resume to work behind the scenes and oversee campaign coverage remains a baffling decision to this day. "Her Twitter includes fact-free invectives against liberals and repeatedly rails against the ‘abortion industry,’" The Daily Beast noted at the time.

By March, CNN acknowledged the controversy and announced that Isgur "is no longer taking a job as a political editor in the Washington bureau. Instead Isgur will be a political analyst at the network, sharing her insights through television segments like many other commentators do."

But now, more questions are being raised about why CNN ever even considered hiring an openly partisan operative for a key campaign coverage position. The questions come as CNN continues to struggle with trying to balance its desire to employ conservative voices for political balance while also maintaining common-sense standards at the network.

We now know that while working for Trump's DOJ, Isgur played a central role in the GOP's public smearing of a longtime FBI official, Lisa Page, who had been part of a 2016 team investigating Hillary Clinton's emails, as well as examining suspicions that Donald Trump's campaign was working with Russian forces. The GOP, led by Trump, declared war on Page after it was discovered she had been texting about the election with FBI agent Peter Strzok, with whom Page was having an affair.

Seizing upon the idea that the FBI was spying on the Trump campaign as part of the nonsensical "Deep State" effort to deny him the White House, Republicans soon turned Page and Strzok into villains, while gleefully leaning into their affair. Just two months ago, "The president called out her name as he acted out an orgasm in front of thousands of people at a Minneapolis rally," The Daily Beast noted.

Now, with a DOJ inspector general's report set to be released which reportedly confirms there was no rogue effort by the FBI to spy on Trump, the whole Page/Strzok smear campaign looks especially cruel and heartless. And it turns out it was Isgur who was essentially feeding what Republicans thought were incriminating texts to reporters back in 2017, as the controversy raged.

The night before then-deputy attorney general Rod Rosenstein was set to testify before Congress, "the Justice Department spokesperson, Sarah [Isgur] Flores, calls the beat reporters into the Justice Department," Page told The Daily Beast. "This is late at night on a weekday. Calls them in to provide a cherry-picked selection of my text messages to review and report on in advance of Rod Rosenstein going to the Hill the next morning.”

Why were the texts released? "You’d have to ask Sarah [Isgur] Flores,” Page said. "I can tell you that the reporters there that night were told that they weren’t allowed to source them to the Justice Department, and that they weren’t allowed to copy or remove them, just take notes. That’s what I know." She added, "Those texts were selected for their political impact. They lack a lot of context. Many of them aren't even about him or me."

This is just egregious behavior, to have a DOJ spokesperson work in tandem with the GOP to try to effectively ruin the life and reputation of an FBI official for purely partisan reasons, and to do it in such a personal and unseemly way. And that's who CNN earlier this year wanted to hire as a political editor overseeing campaign coverage? It's kind of breathtaking.

Again, no reasonable person thinks CNN should not hire conservatives in order to present a wide spectrum of political opinions. Clearly CNN markets itself as occupying the political middle in this country and wants to present itself as a forum for both sides, and that makes sense from a programming perspective. What does not make sense is abandoning newsroom guidelines and principles in order to make room for conservatives with dubious pasts or, in the case of Isgur, someone who acted in such an unethical manner while dealing with journalists.

Keep in mind that CNN reached out to a toxic GOP partisan operative at the same time Trump had declared war on the network. Last year, the White House lashed out at CNN by pulling reporter Jim Acosta's press pass. Trump routinely defames the network on Twitter. Recently, Trump's personal attorney sent a ridiculous letter to CNN, threatening to sue the network for its "biased" coverage of Trump. Yet CNN continually responds by aggressively trying to curry favor with conservatives and Trump defenders.

In October the network hired Sean Duffy as a commentator. The former Republican congressman quickly created problems for the network by constantly fabricating facts and spreading reckless and dangerous conspiracy theories. During his CNN debut week, Duffy lied about the shooting of Rep. Gabby Giffords. He lied about Joe Biden trying to fire a Ukraine prosecutor in order to protect his son. And Duffy helped spread the preposterous lie about the Democratic National Committee's email servers from 2016 somehow ending up in a foreign country.

Duffy then questioned the patriotism of Purple Heart recipient and National Security Council official Lt. Colonel Alexander Vindman, after it was reported Vindman was telling House investigators damaging information about Trump's open collusion with Ukraine and his attempt to get a foreign power to dig up dirt on the Republican's political opponents. CNN anchors went on the air and directly denounced Duffy's comments as a "smear" and an ugly form of "bigotry."

CNN should welcome conservatives onto their televised debates and discussions. But they shouldn’t make exceptions for conservatives who are unqualified for the job.