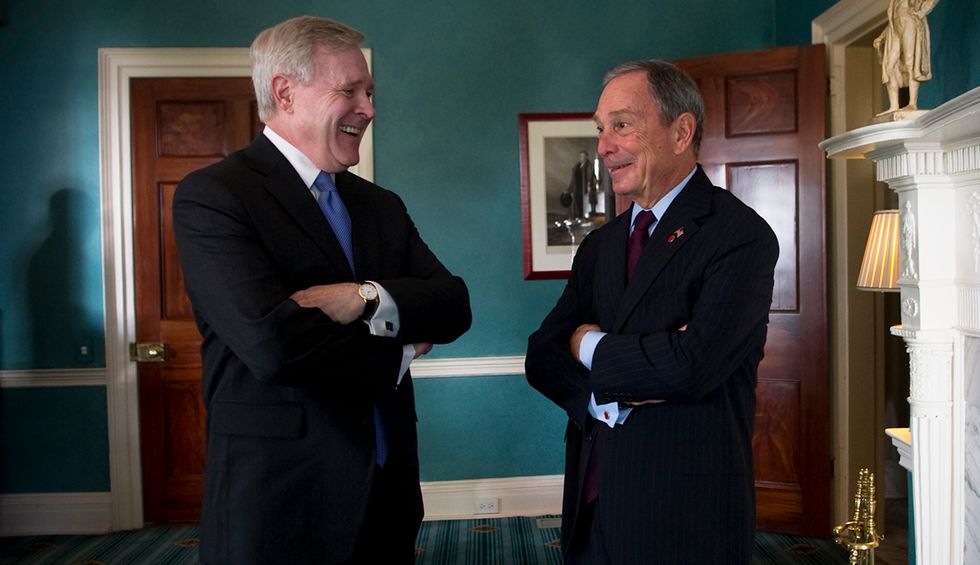 Former New York City Mayor Michael Bloomberg said in a statement late Tuesday that The Intercept's explosive report on his presidential campaign's use of prison labor to make phone calls is "fundamentally accurate" but insisted he was not aware of the practice, which prompted a torrent of outrage from rights advocates.

"Earlier today, a news outlet reported that prison workers were being used by a subcontractor to make telephone calls on behalf of my campaign," said Bloomberg, the wealthiest individual in the Democratic presidential field. "I'm not attacking the news: the story was fundamentally accurate."

"We only learned about this when the reporter called us," Bloomberg added, "but as soon as we discovered which vendor's subcontractor had done this, we immediately ended our relationship with the company and the people who hired them."

"Two of the call centers in Oklahoma are operated out of state prisons," The Intercept reported. "In at least one of the two prisons, incarcerated people were contracted to make calls on behalf of the Bloomberg campaign."

An anonymous source told The Intercept that people incarcerated at the Dr. Eddie Warrior Correctional Center, an Oklahoma women's prison, were making calls to California for Bloomberg's campaign.

"The people were required to end their calls by disclosing that the calls were paid for by the Bloomberg campaign," according to The Intercept. "They did not disclose, however, that they were calling from behind bars."

Bloomberg's campaign said it ended the arrangement with ProCom Monday after The Intercept inquired about the use of prison labor.

Alex Friedmann, managing editor of Prison Legal News, told The Intercept that "use of prison labor is the continued exploitation of people who are locked up, who really have virtually no other opportunities to have employment or make money other than the opportunities given to them by prison officials."

Friedmann said that while it is "entirely possible" Bloomberg was not aware that incarcerated people were making calls on behalf of his campaign, "that's like saying department stores making clothes in southeast Asia don’t know that 5-year-olds are stitching together their soccer balls."

David Klion, news editor at Jewish Currents, said the billionaire presidential candidate's use of prison labor "shouldn't be seen as just a fuckup or a moral failing."

"There should be legal and civil consequences for it. Compelling political speech from incarcerated people should be considered unconstitutional," Klion tweeted. "It's honestly one of the most evil things we’ve ever seen from a presidential campaign, and hopefully Bloomberg’s campaign will end with him paying out unimaginable sums to the people he exploited. In a just world it would."