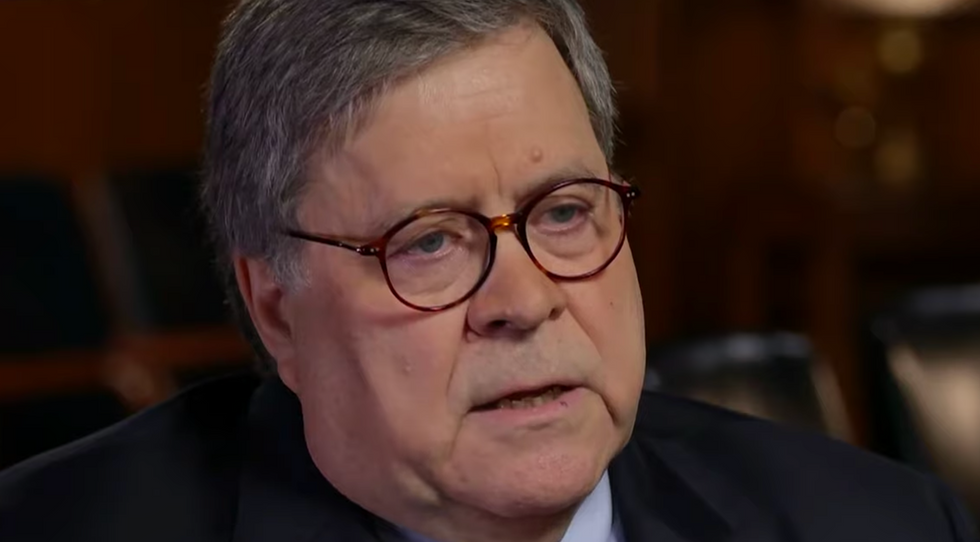 Attorney General Bill Barr has become a lightning rod of sorts in administration, standing out front and taking public hits as he does President Donald Trump's dirty work at the Justice Department.

Far from being the institutionalist even many critics of Trump hoped Barr would be, the attorney general showed his true colors when he spun Special Counsel Robert Mueller's report on the conclusions of the Russia investigation. Mueller and his team so objected to that presentation that they sent Barr a letter arguing that the report had been distorted to the public. Barr later said that the letter was "snitty." Since the end of the Mueller investigation, Barr has repeatedly and consistently proven himself to be a fierce defender of the president's interests, regardless of the consequence of U.S. institutions.

So what, exactly, does Barr think he's doing? Why is the attorney general acting like the personal attorney of the president? In a new interview this week, Barr finally gave a clear reason why, from his perspective, he acts the way he does.

NBC News' Pete Williams asked Barr about why he is so aggressively pursuing Trump's "investigation of the investigators" — now a criminal probe of the Russia investigation run by U.S. Attorney John Durham — even after the Justice Department Inspector General Michael Horowitz released a lengthy report on the subject. The answer, like the whole interview, was revealing.

"I think our nation was turned on its head for three years I think based on a completely bogus narrative, that was largely fanned and hyped by an irresponsible press," Barr said, referencing the Mueller probe and the resulting press coverage. "And I think that there were gross abuses of FISA and inexplicable behavior that was intolerable in the FBI. And the attorney general's primary responsibility is to protect against the law enforcement and intelligence apparatus and make sure that it doesn't play an improper role in our political life. That's my responsibility, and I'm going to carry it out."

In this answer, Barr revealed that the animating force behind his crusade is the media coverage of Trump, not the law. He was particularly incensed the media coverage of the Russia investigation. He's clearly angry, like Trump is, that it dominated so much of the president's first term in office. He is, it seems, seeking to get retribution and to set things right.

At other points in the interview, he made clear that he is preoccupied with the media. Asked why he Durham put out statements contradicting Horowitz's finding that the Russia investigation was properly predicated, he said:

It was sort of being reported by the press that the issue of predication was sort of done and over, even though it was a very limited look at that issue by the IG given the narrowness of the evidence available to him. And I think it was important for people to understand that Durham's work was not being pre-empted and that Durham was doing something different. ... I think it was perfectly appropriate so the public understood the relationship between the two exercises. [emphasis added]

Again, he made clear that what's he's concerned with is public perception and press reporting, not law and procedures.

After Durham's statement, which referenced his ongoing investigation, many legal experts were shocked. U.S. attorneys carrying out grand jury investigations do not talk about their ongoing investigations except in extraordinary circumstances. Former FBI Director James Comey, for one, was baffled by Durham's actions, saying, "I can't make any sense of it." It seemed Barr may have put him up to it — and even if he didn't, he now defends the move despite no substantial justification.

And despite Barr's claim that he's supposed to "protect against the law enforcement and intelligence apparatus and make sure that it doesn't play an improper role in our political life," that's not actually what his official duties are as attorney general. Much of the intelligence apparatus — the CIA, the NSA — falls outside his department, though federal investigators can, of course, probe their activities and prosecute their crimes. But Barr has made clear that he seems to think the CIA was somehow nefariously involved in the origins of the Russia investigation. He seems to think this part of Durham's probe will be key to defending the president and fighting back against what he sees as an unfair press.

And it's clear he's not actually worried about the Justice Department's influence on media coverage in general. He's specifically worried about how it affects Trump. He continued, again discussing the beginnings of the Russia probe during the 2016 election:

From a civil liberties perspective, the greatest danger to our free system is that the incumbent use the apparatus of the state, principally the law enforcement agencies and the intelligence agencies, both to spy on political opponents but also to use them in a way that could affect the outcome the election. As far as I’m aware, this is the first time in history that this has been done to a presidential campaign. The use of these counter-intelligence techniques against a presidential campaign.

But what he doesn't mention is that there's actually very little evidence that the Russia probe had much of an effect on the 2016 election. The Carter Page surveillance, which Barr and other Republicans are outraged about, and in which the FBI did make significant errors, could not conceivably have impacted the election. Page wasn't even a part of the Trump campaign when the surveillance was finally ordered, and even when he was working with the campaign, he was an extremely minor figure. It's not even clear how it could have been used against the Trump campaign, and there's certainly no reason to think it was. Barr also suggested in his interview that he finds something suspicious about the fact that the Page surveillance continued after the election, suggesting that it was somehow an affront to Trump, but not acknowledging that Page had no contact with Trump after that point.

The FBI's actions during the 2016 election that likely did have an impact on the election, though, were bad for Hillary Clinton, not Trump. First, an investigation into the Clinton Foundation — which never led to any indictments — was confirmed to the media. Most significantly, though, Comey announced that he was reopening the Clinton email investigation less than two weeks before Election Day. The evidence suggests that may have cost her the election, and there's also reason to believe that Comey's choice was influenced in part by anti-Clinton bias within the bureau.

Not only does Barr not seem at all concerned about those events, he defended them at the time in a Washington Post op-ed:

If the FBI remained silent about the newly discovered incompleteness of its earlier investigation, it would be deliberately leaving uncorrected a misleading statement being used by the Clinton campaign to its political advantage. Thus, failure to correct the record would have been deceitful and would have represented a political decision to influence the election by leaving in place a misleading statement. At this point, the right choice was honesty — explaining that new emails had been found and would have to be reviewed. To the extent this step might affect the election, its effect arises from correcting a previous erroneous statement — in other words, from truthfulness.

The claim that Comey’s actions violated a Justice Department policy is just wrong. There is no policy — and never has been — that the department avoid any action that could affect an election. Rather, the policy has been twofold. First, prosecutors should not take any action for partisan reasons, i.e., for the purpose of affecting an election. Second, where the timing of an otherwise bona fide investigative or prosecutive step could affect the outcome of an election, those actions should be deferred absent a strong public interest that justifies taking the action before the election. Sometimes this requires difficult judgments. Here, it did not. Indeed, if anything would have “violated” Justice Department policy, it would have been to remain mute and fail to correct the record.

And while Barr's very concerned about improper political motivations affecting the opening of investigations of associates of Trump, he has shown no concern about the president's efforts to get Ukraine to investigate former Vice President Joe Biden or the DNC — investigations that would clearly be motivated by politics.

"Fortunately, I haven't gotten into the Ukraine thing yet," he told Williams.

When Williams asked about the Justice Department's decision not to investigate Trump's Ukraine scandal, despite getting receiving referrals for the case from others, he was pretty tight-lipped.

"The criminal division made that decision, and in the process consulted with the senior-most career employees who are the experts on campaign finance laws," he said. "And that process was supervised by the deputy. But I'm not going to go beyond what we've already said about that process."

Williams asked: "Were you satisfied that everything that should have been done was done?"

"Absolutely, absolutely," Barr said. He has never said publicly that he wasn't involved in the decision — a question he seems to be studiously avoiding.

He refused to discuss the matter further, even though he's happy to pontificate and speculate publicly on whether Obama officials were improperly biased against Trump — long before Durham's investigation is completed.

And as for Durham's investigation — which Barr says will likely wrap up in the spring or summer of the coming year — should we expect a public report? Again, Barr wouldn't say directly. But he indicated that he has an opinion on how public it should be.

"I'm going to largely leave that to him," Barr said, "but I'm also interested in discussing that with him as he gets further along."