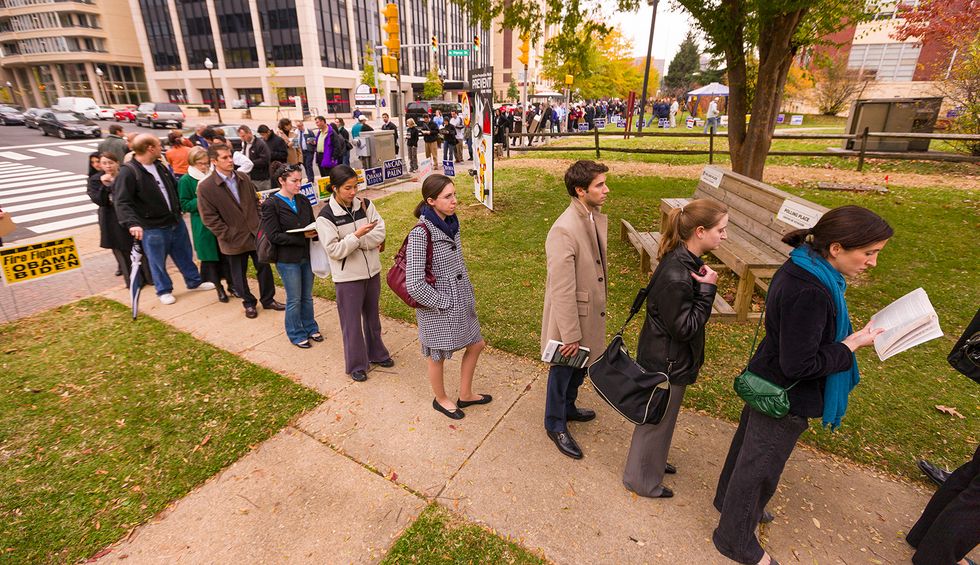 We don't need to speculate on what might happen if, because of sabotage or simple malfunction, the electronic voting machines now ubiquitous throughout the nation were to simply not work on a vitally important Election Day, altering the votes, tossing others, and possibly throwing entire elections to a candidate who hasn’t actually won. We already have examples. Less than a month ago, a Pennsylvania county's new top-of-the-line voting machines did exactly that.

From The New York Times:

Vote totals in a Northampton County judge’s race showed one candidate, Abe Kassis, a Democrat, had just 164 votes out of 55,000 ballots across more than 100 precincts. Some machines reported zero votes for him. In a county with the ability to vote for a straight-party ticket, one candidate’s zero votes was a near statistical impossibility. Something had gone quite wrong.

That something was, it soon proved, the Election Systems & Software-manufactured voting system, ExpressVoteXL, reporting wildly inaccurate vote totals: A recount of the paper backup ballots produced by the machines showed that the Democrat did not get 164 votes in the election, but 26,142. Officials don't yet know why the machines returned invalid results; we also don't know, of course, whether results in other elections in other counties and states had similar but less severe problems that were not so improbable as to spur officials to recount. It's entirely possible that elections were thrown, just in the last few years, by software error.

The ES&S spokesperson is of course full of bluster in that Times story, noting that because the malfunctioning machines also had "voter-verified" paper backup ballots to be recounted, everything turned out fine with "fair, accurate and legal election results." Others seem similarly relieved that there was, in this case, a paper trail to fall back on—even if programming errors (we hope) did render the actual touchscreen-voting electronic devices absolutely useless for their intended purpose. In the case of the lavish and expensive ExpressVoteXL, a human-readable paper ballot is printed behind a transparent panel for the voter to verify; once approved, it is dumped into a secure bin under the machine.

Which, assuming each and every voter checks that the paper ballot produced matches what they intended to press on the screen, is definitely better than having nothing. And is infinitely better than the absurdity of an encoded, human-unreadable paper record, a ridiculous premise that only doubles the likelihood that a machine malfunction will be made official regardless of each voter's actual intent. So ... hooray?

Pennsylvania, along with about a dozen other states, is scurrying to replace voting machines that do not generate paper trails before next year's elections; the state has been having problems with touch-screen voting for over a decade.

Again, then: We can assume with near-absolute certainty that errors similar to these have happened on machines that do not have paper backup ballots, that those errors went undetected, and that other election outcomes were thrown to a losing candidate. And none of this, absolutely none of it, even contemplates what would happen if a sophisticated state-sponsored attack on the machines inserted malware that was designed not to alter vote totals, but simply to impede and delay voting in some counties and districts but not others.

Which, going into a second national election in which a hostile foreign power is barely attempting to hide efforts to sabotage American democracy for the sake of doing so, seems a bit of a concern.