A 7-year-old complained about a scary office at school. This is the video his parents saw — a month later. 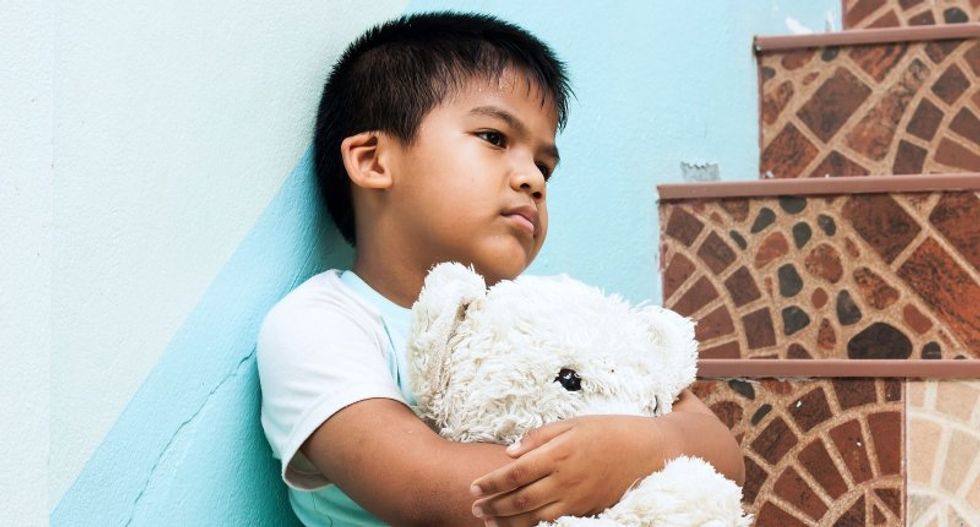 This week, ProPublica Illinois and the Chicago Tribune co-published an investigation about Gages Lake School, a therapeutic day school in Lake County for students in kindergarten through fifth grade with emotional and behavioral disabilities. It is our latest story in “The Quiet Rooms,” an investigation into the way schools across Illinois have used — and often misused — seclusion. Over the 15-month period reporters examined, Gages Lake used seclusion more than almost any other Illinois school included in the analysis.

We also published a video, based on surveillance footage from Gages Lake, of a 7-year-old boy, Staley Sandy-Ester, who was routinely put in the school’s seclusion rooms last spring. The April 30 video, obtained from the school by the boy’s family and then provided to us, shows him trying to leave the room while a school aide, sitting in a rolling chair, blocks the doorway. At one point, the aide pins Staley’s wrist against the wall. He gets increasingly upset and kicks at her. She then stands up, chases Staley, grabs a folded piece of paper from his hand and shoves him toward a wall.

Staley had complained to his mother, Beth Sandy, about a scary office at school. She didn’t know what he meant until she saw the footage last spring. That’s when the Illinois Department of Children and Family Services began investigating whether children at the school had been physically abused in an area of the school called “the office,” where children were put in isolated timeout.

Officials from the Special Education District of Lake County, the school district that includes Gages Lakes, had watched the video while investigating another incident at the school, and contacted DCFS. They ultimately reported that eight children, including Staley, might have been abused over a month’s time in the spring.

The other aide, Jennifer Aguirre, died by suicide in August, soon after learning of the DCFS investigation into her conduct at Gages Lake, records show. She had worked at the school for nearly 18 years.

In all, DCFS has opened 21 investigations into alleged physical abuse at Gages Lake since mid-May — including six this school year. The eight allegations against Izquierdo are pending, according to a DCFS spokesman. All five cases involving Aguirre were determined to be unfounded. The other eight cases involved different staff members; a DCFS spokesman would not discuss the outcomes but said five remain pending.

The first time we spoke with Staley’s mother, in late June, she shared how difficult it was for her to watch the footage the first time she was shown it. “I couldn’t finish viewing it,” she said. “I couldn’t do it.”

The district had given her a copy of the video, and she said we could meet with her and watch it. “This is messed up and other people need to hear about it,” she told us. “I want to be a part of something to stop this from happening to another child.”

We met near her home in Round Lake Heights soon after, and then several more times this year. Staley, named for a lead singer of the band Alice in Chains, usually joined us. Diagnosed with attention deficit hyperactivity disorder, he likes robots and computers, playing with Transformers and spending time at the neighborhood library.

Staley is being home-schooled for now, until his parents decide on a new school. They have been back to the school a half-dozen times times to watch hours of footage of their son in seclusion.

Sometimes, Sandy said, Staley was left unsupervised behind a locked door, with nobody watching from outside as state law requires. He walked the perimeter of the room, paced back and forth, rolled on the floor. He knocked on the glass observation window to try to get someone’s attention.

“You just see the minutes roll and roll,” she said.

Staley’s parents have only the 90-second clip from April 30 that prompted school officials to contact DCFS about possible abuse. They said other videos show their son being physically abused but officials won’t give them copies. A DCFS spokesman said the agency has not reviewed any additional video involving Staley.

District officials have not told Sandy — or us — whether they had a practice of watching the surveillance footage before they received the first complaint from parents last spring that a student had been injured while in the office.

District Superintendent Valerie Donnan said officials reviewed “many hours of video footage,” but she declined to say how they decided which incidents to report to DCFS as possible abuse, saying the videos were part of an ongoing police investigation.

“If we observed interactions that did not comply with (district) protocols, we did not look away,” she said, noting that officials contacted parents, DCFS and law enforcement.

Donnan said an internal review of Gages Lake’s use of isolated timeout and physical restraint concluded that some “procedures were not followed.” “We have been actively and relentlessly working to change,” she wrote last week in response to questions.

Sandy said watching the videos has been traumatic. After one of the more troubling ones, which she said shows a school employee repeatedly shoving her son, she said she didn’t sleep for three days. “I couldn’t stop thinking about what I just saw,” she said.

Staley’s father, Daniel Ester, said “it’s been really hard to just keep my composure” while watching the videos. “I want accountability,” he said, “and the apologies they give is not accountability at all.”

We will keep writing about seclusion. Earlier this week, in response to our investigation published last month, the Illinois State Board of Education proposed rules that would permanently ban the practice of secluding children alone.

We want to hear from you, including what you know about the use of seclusion in Illinois schools. You can reach us at seclusion@propublica.org.