Why Trump's disdain for Ukraine matters 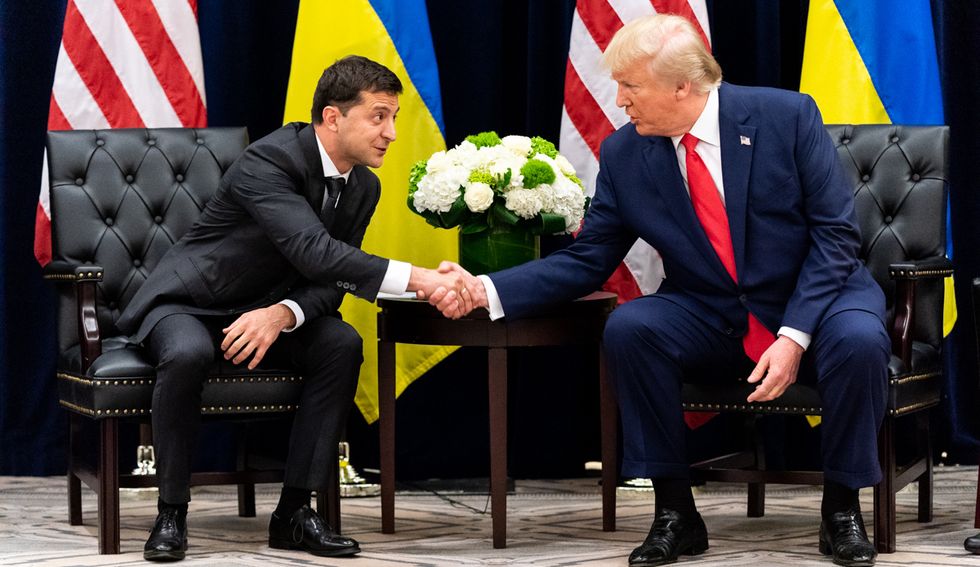 Watching the first two days of the House impeachment inquiry's public hearings, what struck me once again is the utter contempt Donald Trump has for other sovereign nations and fellow heads of state. We’ve seen the evidence of it many times before—"shithole countries," disdain for NATO, the UN and the European Union—but this current mess really brings it home.

Trump treats Ukraine as if it were the slaphappy Freedonia of the Marx Brothers' Duck Soup, a tiny land comically scripted for his personal benefit and political convenience.

In the real world, as one of the nations that broke away from the Soviet Union at the end of the Cold War, Ukraine has been engulfed in a bloody conflict since Russia invaded in 2014 and seized Crimea, some seven percent of Ukrainian territory. The nearly $400 million in military aid that Trump petulantly tried to withhold—unless Ukraine investigated the Bidens and a 2016 election fraud fantasy of his—was crucial to keep fighting against the Russian aggression that over the last five years has claimed between 13-14,000 Ukrainian lives.

"The devastating testimony uncovered evidence of bribery," Speaker Pelosi said the day after Wednesday's hearing. "... The president abused his power and violated his oath by threatening to withhold military aid and a White House meeting, in exchange for an investigation into his political rival."

Yes, Ukraine has been plagued by corruption ever since it declared independence in 1991. The graft is part of what former Ambassador to the Ukraine Marie Yovanovitch described Friday as the “post-Soviet legacy” that has afflicted virtually all of Eastern Europe since the dissolution of the Soviet Union.

Until recent weeks, with the swearing-in of new president Alexander Zelensky and his promises of reform, Ukraine's government has been fueled by payoffs and kickbacks. Yet acting ambassador William Taylor told the committee on Wednesday, "Ukraine is important for our national security and we should support it—not to provide that would be folly." To which Yovanovitch pithily added during her Friday testimony, "This isn't a tabletop game. There are lives in the balance."

To think that by suspending military funding Trump was nobly trying to weed out Ukrainian corruption is laughable to anyone who can see how little he gives a damn about anyone or anything other than himself.

It was Ambassador Yovanovitch who was putting up a real fight against criminality in Ukraine and its avaricious oligarchs. For her trouble, she was smeared not only by those kleptocrats but by Trump, his "personal lawyer" Rudy Giuliani and their assorted henchmen because her honesty and integrity were getting in the way of their scheme to use Ukraine to help grease the track to Trump’s re-election. After 33 distinguished years in the foreign service, she lost her job, had her reputation maligned and, when she began her testimony Friday, received the honor of being tweet-bombed by His Effluence himself, a blatant attempt to besmirch and intimidate her—and other potential witnesses.

If you needed additional proof of Trump’s real motives, recall the big reveal in Wednesday’s testimony from acting Ambassador Taylor: that previously unreported, July 26 phone call between Trump and US European Union ambassador Gordon D. (D for Duh) Sondland overheard by one of Taylor’s aides. A conversation that came a day after the call between Trump and Zelensky that triggered this whole crisis.

The aide, David Holmes, political counselor at our embassy in Kyiv, had lunch there with Sondland and others at an open air restaurant from which Sondland called Trump on his unsecured cellphone, easy prey for electronic eavesdroppers.

Holmes himself was questioned in closed session by the House intelligence committee Friday afternoon. In his opening statement, first obtained by CNN, he informed committee members, "Sondland told Trump that Zelensky 'loves your ass,' I then heard President Trump ask, 'So, he's gonna do the investigation?' Ambassador Sondland replied that 'he's gonna do it,' adding that President Zelensky will do 'anything you ask him to.'"

Holmes claimed that after the call was over, he asked Sondland "if it was true that the President did not 'give a shit about Ukraine.'" Sondland said Trump only cared about "big stuff." Holmes said the war in Ukraine was big, to which he says Sondland replied, "'Big stuff' that benefits the President, like the Biden investigation that Mr. Giuliani was pushing."

Eventually, the $400 million in military aid, which had been approved by Congress months ago, was released to Ukraine but not, as Trump's GOP grovelers would have you believe, out of the kindness of his motheaten heart but because the anonymous whistleblower found out, was suspicious and began the process that blew up the conspiracy to extort Ukraine and Zelensky.

Now, in the face of overwhelming evidence, what the Republican counsel and GOP committee members are trying to do is blow massive clouds of smoke, misrepresenting the facts and hoping their constituents remain too uninformed or blindly loyal to notice they're being flimflammed. Rep. Devin Nunes (R-Calif.), ranking member and noted enemy of cows with Twitter accounts, Reps. Jim Jordan and Elise Stefanik make a show of crying foul on points of procedure when they know full well the established rules are being followed—they're hoping you don't.

They jump up and down about the lack of evidence and "firsthand" witnesses, aware that those witnesses and mountains of documentation are being held back by a White House defying subpoenas and hoping to keep them tied up in the courts—a tactic Trump effectively has used his entire career. They’re counting on their base not knowing—or caring. They yell that the hearings are holding up valuable legislation when hundreds of bills passed by the House this session are jammed in the Senate under intransigent majority leader Mitch McConnell.

They accuse Ambassador Yovanovitch of not being at certain crucial events even though they occurred after Trump fired her, and then imply the appointment of respected career diplomat Bill Taylor to replace her is proof that Trump was behaving fairly, although they know Taylor is the acting ambassador and a new permanent representative has not been named. No doubt Trump is looking over his millionaire donor list for the next lucky winner.

On top of all this and more, they encourage various types on TV, radio and in social media (including Eric Trump) to carp that the hearings are too boring and that the number of names involved—especially those complicated Slavic ones—are just too darned confusing. Why bother?

Actually, it’s pretty simple. Donald Trump resents that people say Moscow was involved in his 2016 victory. Whether it’s true or not—although clearly it is to the intelligence community and anyone who has followed events since that campaign—the accusation makes him nuts. The kindest interpretation is that the charge hurts his feelings; worse, that he got caught and is mad about it; and at the very worst, that he has been in Putin's pocket, possibly via incriminating kompromat, for years. Deny, deny, deny—another tactic that over the years has served him well.

Another explanation had to be manufactured that was un-Russian. Voila, Ukraine. Blame it all on Ukraine and while you’re at it try to force them to manufacture phony investigations to confirm your conspiracy theories.

What's more, as Dan Friedman writes at Mother Jones, during Friday's hearing, “Daniel Goldman, a top Democratic aide on the House Intelligence Committee, cited a February 2, 2017, joint press conference held by Putin and the far-right leader of Hungary, Viktor Orban. In it, Putin pushed the view that it was Ukraine, not Russia, that interfered in the 2016 US election."

"'We all know, during the presidential campaign in the United States, the Ukrainian government adopted a unilateral position in favor of one candidate,' Putin said. 'More than that, certain oligarchs, certainly with the approval of the political leadership, funded this candidate, or female candidate, to be more precise.'

"… Asked about Putin’s statement, Yovanovitch said that amid intense concern in the United States about Russian meddling, it was 'classic' for Putin, a former KGB officer, 'to try to throw off the scent and create an alternative narrative that maybe might get picked up and get some credence.'"

Who's more credulous than our Dear Leader, especially when word comes down from his bestest Russian buddy? Not only has "our Ukraine policy… been thrown into disarray," Ambassador Yovanovitch testified. "… Shady interests the world over have learned how little it takes to remove an American ambassador who does not give them what they want."

This is what an America First foreign policy, a State Department, in Yovanovitch’'s words, "hollowed out from within at a competitive and complex time on the world stage"and an amoral, self-obsessed chief executive get you.

To think that by suspending military funding Trump was nobly trying to weed out Ukrainian corruption is laughable to anyone who can see how little he gives a damn about anyone or anything other than himself. And if he can even find Ukraine on a map without some general guiding his stubby index finger in the right direction, I'll ride a baby buggy down that country's Odessa Steps. All I need is a push.