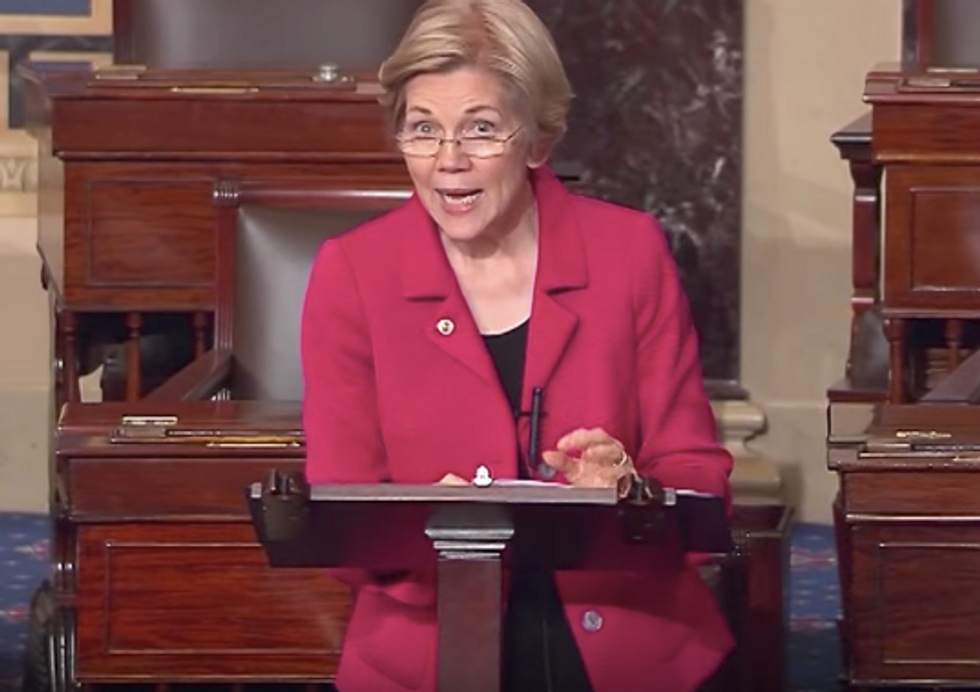 “If I had to pay $20 billion, it’s fine,” Gates remarked. “But when you say I should pay over $100 billion, then I’m starting to do a little math about what I have left over.”

Gates, the second richest person in the world, currently enjoys a fortune of around $107 billion. If Warren’s wealth tax were enacted (and not struck down by the Trump Supreme Court), he would be on the hook for a tax hit of around $3.2 billion. It would be double that if her scheme to pay for Medicare for All were to become law, but still a far cry from “over $100 billion.”

His tone-deaf resistance to equitable taxation comes at a time when most Americans are facing greater economic inequality than at any period in American history. And he isn’t alone – billionaires across the political spectrum are rallying against Warren and in defense of their monumental fortunes.

Omega Advisors CEO and former Goldman Sachs bigwig Leon Cooperman – estimated net worth $3.2 billion – broke down in tears on live television at the very thought of being held to the same standard as the average American taxpayer. In September, a group of Wall Street “Democrats” threatened to vote for Trump if their party supported a return to effective taxation of the ultra-rich.

Exact numbers are difficult to pin down, but a comprehensive analysis by economists Gabriel Zucman and Emmanuel Saez in their new book The Triumph of Injustice shows that the top 1 percent of American earners control about 20 percent of all national wealth. That figure has more than doubled since 1980.

At the same time, Zucman and Saez show, the mega-rich are paying less in taxes relative to their lower-income counterparts. In fact, the wealthy have grown so adept at manipulating the tax code that now the 400 richest Americans pay a lower tax rate than the bottom half of American earners: about 25 percent for the wealthy compared to 28 percent for the rest.

Working Americans have seen their wages either stagnate or decline even as the combined fortunes of those in the top 10 percent have skyrocketed to consume 70 percent of all national wealth. The billionaire class would prefer we see economic inequality as a new normal, the result of globalization and automation. It isn’t.

The ultra-rich have prospered thanks to purposeful policy decisions. Taxing capital income - the type of income predominantly earned by billionaires - less than labor income, which the rest of us earn - is one reason why Bill Gates, who retired over a decade ago and pledged to donate all of his wealth to charity, now sits on a larger fortune than he had in 2008.

It’s also why so many “good guy billionaires” like Warren Buffett support raising income taxes – again, the taxes you pay – but sound the alarm when anyone suggests raising taxes on investment income. Just this week, Buffett came out strongly against the very idea. (Bill Gates, to his credit, believes that capital gains should be taxed at the same rate as income and also favors an increase in the inheritance tax.)

The sobs and dire warnings of Wall Street billionaires like Leon Cooperman are Warren’s most effective campaign commercials. They are terrified because, as Zucman and Saez point out in their research, the only thing preventing America from pursuing a progressive, equitable tax system is a lack of political will.

“Half a century ago…working class and middle class Americans paid less [tax] than today, because payroll taxes were lower,” Zucman and Saez argue. “The rich, on the other hand, paid much more. For forty years, from the 1930s to the 1970s, the wealthy paid more than 50 percent of their income in taxes, three times more than Americans in the bottom 90 percent.”

Since the Reagan Revolution of the 1980s, the ultra-rich have commandeered the driver’s seat of American economic and tax policy, enriching themselves at the expense of every other economic group. What shocks and offends regular Americans is the extent to which billionaires will form political alliances with leaders they abhor in order to protect their bank accounts.

Heavy-handed threats from the wealthy - nominate a candidate favorable to my wealth or else – give away their corrupt game. It is time to remind the ultra-privileged that they are equal citizens in this republic.