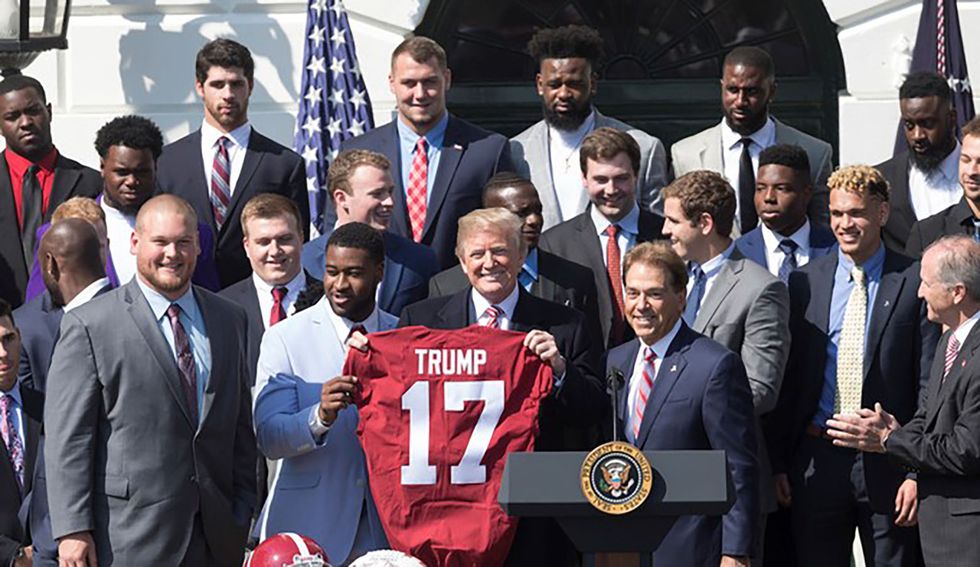 This Saturday, November 9, President Donald Trump is scheduled to appear at a college football game at the University of Alabama in Tuscaloosa — where the team LSU will be battling Crimson Tide. And the student government is now walking back a warning against “disruptive” behavior at the game.

On Tuesday, Jason Rothfarb — vice president of student affairs for Alabama’s Student Government Association — warned, “Any organizations that engage in disruptive behavior during the game will be removed from block seating instantly for the remainder of the season.” And an outcry against Rothfard’s warning followed on social media. One student tweeted, “strange that in all the games in which drunken bacchanalia has been tolerated, if not celebrated and encouraged, I’ve never once been warned to not be ‘disruptive.’”

But on Wednesday, the Alabama Student Government Association tweeted, “The SGA strongly affirms its belief in free speech and the rights of all students to express their opinions. Today’s report erroneously assigned a political context to a message meant only to remind students about heightened security and the consequences of altercations or other behaviors unbecoming of a University of Alabama student.”

Rothfarb, according to AL.com, later asserted, “Some have misinterpreted my comment regarding ‘disruptive behavior’…. By disruptive behavior, we are asking students to be respectful to all students and staff and avoid altercations. My e-mail has nothing do with anyone’s First Amendment rights, and I am sorry for any confusion.”

From the University of Alabama SGA, ahead of President Trump's visit to the game. Strange that in all the games in… https://t.co/dfXlOm73e1
— Carter-William (@Carter-William)1573012741.0

Trump was recently booed during an appearance at the 2019 World Series in Washington, D.C., where people in the crowd chanted, “Lock him up, lock him up” — an anti-Trump version of the “lock her up, lock her up” chant used by Trump supporters in reference to 2016 Democratic presidential nominee Hillary Clinton. And Trump was booed again at a UFC fight at Madison Square Garden in New York City.