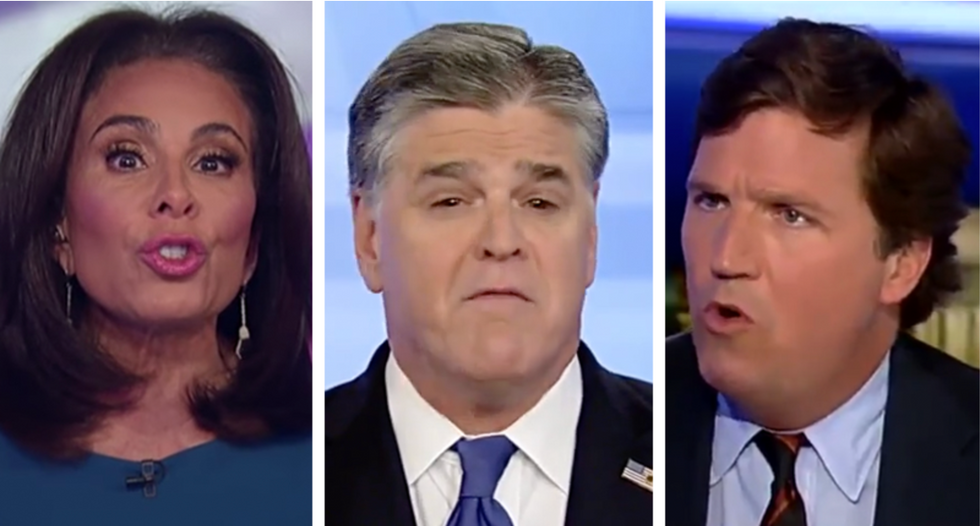 A few weeks back, I wrote that Richard Nixon would almost certainly have served out the remainder of his second term and gone on to become an elder statesman of the Republican Party if Fox News, OANN and the right's sprawling online media infrastructure had existed in the early 1970s. The obvious correlate is that Donald Trump would be in significantly more trouble than he is if Americans of different political persuasions all shared a common reality informed by professional news organizations in 2019.

On the one hand I'm stunned by Trump defenders insisting that he wanted to investigate the Bidens because he just c… https://t.co/qkAf7Ez6Aa
— The face toucher (@The face toucher)1573317438.0

Since the impeachment process began, there's been some speculation about what crimes Trump might commit or how much evidence might have to accumulate before 20 Republican Senators broke ranks and voted for Trump's removal from office. But those are the wrong questions. With the exception of Mitt Romney--who is far more popular with the GOP's heavily Mormon Utah base than is Trump--Republican officeholders know that merely speaking out against the president* is electoral suicide. Most of those who have criticized Trump have decided to spend more time with their families and not seek re-election. The few that haven't--like former South Carolina Rep. (and former Governor) Mark Sanford--were crushed in GOP primaries.

As long as the conservative media protect Trump, the base will remain with him and the best outcome one can expect in the Senate, assuming the House impeaches, is that a handful of Republican Senators with tough races coming up in blue or purple states vote for removal so that his acquittal isn't entirely along partisan lines. (Aside from West Virginia's Joe Manchin likely voting with Republicans.)

And the conservative press has too much invested in Trump to cut him loose now. One could imagine a scenario in which Fox executives decide that Trump is too great of a liability for their party and order that their staff starts covering him in a genuinely fair and balanced way--it's a mega corporation, and the younger Murdochs are not like their father-- but the likelihood of OANN and Breitbart and The Federalist and The Daily Caller and The Free Beacon and all the rest abandoning Trump is virtually nil. They've already invested too much in him and debased themselves too visibly to turn back now.

So forget about Trump not serving out his term, and think about what you can do to help beat not only him but the Republican Party so soundly that conservative leaders have no choice but to conclude that Trump's brand of bitter, conspiratorial ethnonationalism is unsustainable in the United States.

And with that, let's move onto this week's fresh Hell...

Relatedly, in the transcript of his testimony to Congress released this week, Lt. Col. Alexander Vindman, the NCS's top Ukraine expert, said that everything former Hill and current Fox News "reporter" John Solomon wrote about various Derp State conspiracies--articles that were used in a campaign to oust former US ambassador Marie Yovanovitch--was utter garbage.

When Republican Rep. Lee Zeldin asked Vindman, “Are you referring to everything John Solomon stated [being wrong] or just some of it?”, he replied, “his grammar might have been right.” [via The Daily Beast]

"The Justice Department is going on the offensive against the anonymous author of 'A Warning,'" reports CNN, "telling them in a letter obtained by CNN Business that he or she may be violating 'one or more nondisclosure agreements' by writing the anti-Trump book."

Experts say that nondisclosure agreements signed by White House personnel, who work for the US government and not Trump personally, are unenforceable and probably illegal.

WaPo published this little tidbit from the book:

“It’s like showing up at the nursing home at daybreak to find your elderly uncle running pantsless across the courtyard and cursing loudly about the cafeteria food, as worried attendants tried to catch him,” the author writes. “You’re stunned, amused, and embarrassed all at the same time. Only your uncle probably wouldn’t do it every single day, his words aren’t broadcast to the public, and he doesn’t have to lead the US government once he puts his pants on.”

"While meeting with President Donald Trump, the parents of a British teenager who was killed in a traffic collision with the wife of a U.S. diplomat were offered money from the Treasury by the president, which they refused," according to Newsweek. If you haven't followed the story, Anne Sacoolas, wife of a fat-cat Trump donor who bought an ambassadorship, was reportedly driving on the wrong side of the road when she killed 19-year-old Harry Dunn, gled the scene and then hightailed it out of the country, claiming diplomatic immunity. Only the best people.

The Trump regime wants to charge desperate refugees fleeing war and natural disasters an application fee, making the US one of only four countries in the world to do so. The proposal would also hike fees for becoming a citizen to over $1,000 and "eliminate fee waivers that Citizenship and Immigration Services currently grants to those experiencing certain financial hardships." [via NYT]

As if that weren't sufficiently cruel, the regime removed an asylum-seeker who fell ill with some unspecified malady while being detained by ICE from life-support over his family's objections, according to USA Today.

More than a month later, the man's body remains in the USA, his relatives said they have been given little information about his death, and his brother has twice been denied a visa to travel to the USA to identify the body and accompany it back home to Cameroon.

We've covered the relentless efforts by the White House and Senate Republicans to block any attempt to strengthen the nation's cybersecurity ahead of the 2020 in the past. And we really want to emphasize that this isn't just about Russia--2020 is shaping up to be a free-for-all for foreign meddling...

I had never heard this before — Trump’s frequent stays at his own properties are exhausting Army bomb techs who go… https://t.co/lD6rTdqINU
— David Fahrenthold (@David Fahrenthold)1573046650.0

One country that you might think would intervene against Trump would be China (or as Trump would say "Gina"), which has been locked in a grueling trade-war with the Manbaby-in-Chief. But according to The South China Morning Post, they'd much prefer Trump to the alternative.

[Trump] would be most welcomed with another four years in the White House because he is easier to read than other American politicians, said the negotiator who led China’s entry into the World Trade Organisation (WTO).

The US president's daily Twitter posts broadcast his every impulse, delight and peeve to 67 million followers around the world, making him “easy to read” and “the best choice in an opponent for negotiations,” said Long Yongtu, the former vice-minister of foreign trade and point man during China’s 15-year talks to join the WTO nearly two decades ago.

They also like Trump, according to the report, because "he is concerned only with material interests such as forcing China to import more American products," and doesn't give a damn about things like democracy in Hong Kong or human rights more broadly.

This headline in The Guardian may sum up the Trump years better than any other...

But this one, on a Daily Beast story about officials scrambling to deal with Trump's insistence that Hurricane Dorian was likely to hit Alabama, is a contender....

"Emails Show Government Agency Melting Down Over Trump’s Hurricane Fiasco: ‘This Has Really Gotten Out of Hand’"

In much more serious and disturbing news, documents FOIA'd by Buzzfeed reveal that senior officials turned a blind eye to "a pattern of escalating [sexual] harassment" at the Justice Department, including an alleged rape committed by a senior official.

Vice President Mike Pence's office has been pressuring officials at USAID to reroute foreign aid to Christian groups he favored, according to an investigation by Propublica. "Officials at USAID warned that favoring Christian groups in Iraq could be unconstitutional and inflame religious tensions," reported Yeganeh Torbati. "When one colleague lost her job, they said she had been 'Penced.'”

In related news, we find it pretty funny that Donald Trump, Mr. Two Corinthians, has a personal pastor. But it is consistent that she appears to be a grifter.

Paula White is a Florida pastor who led a prayer at Donald Trump’s inauguration, chairs his Evangelical Advisory Council, and is now a White House employee, with her salary paid for by the American taxpayer.

Befitting her association with an administration occupied by a deadbeat ex-reality TV star who has spent his life affiliating with various fraud enthusiasts, she is often introduced as “Dr. Paula” despite never having graduated from college and lives a comically luxurious lifestyle despite having driven her previous church into bankruptcy.

We leave you with a small piece of good news this week, via WaPo...

A federal judge on Wednesday voided the Trump administration’s “conscience rule” that would have allowed health-care providers to refuse to participate in abortions, sterilizations or other types of care they disagree with on religious or moral grounds.

It's a rough decision for Amish bus drivers who refuse to drive a bus but good for the rest of us.