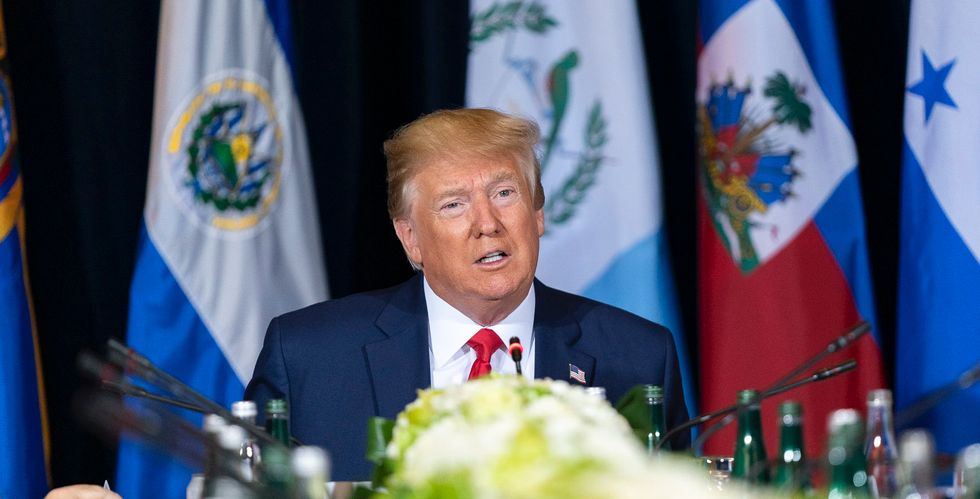 According to news reports, the Trump Organization is considering selling its prime location Washington hotel. The statement from son Eric Trump was that the company was getting lots of inquiries offering a great deal for the hotel, so why not take a look.

The announcement piqued my interest – not for the possible purchase of an obviously profitable hotel – but in my perennial, if futile, search for logic and rationality in Trump thinking.

Since Donald Trump was elected, critics, ethicists and Democrats have pointed out that ownership of this hotel seemed to fly in the face of the emoluments clause of the U.S. Constitution by allowing Americans and foreigners to steer money to Trump through indirect means.

It says straight up that the president is barred from receiving financial benefits from kings, princes and foreign representatives. As it happens, attempts to determine how much has been spent at the hotel by foreign officials seeking to interact with the Trump White House have met a stone wall. The Trump Organization has made estimates that turn out to be undervalued.

Foreign leaders and their teams have made it clear in interviews and articles over three years that they all recognize that the way to present their cases to Team Trump is to start by booking suites at the very expensive Trump hotel. For that matter, Attorney General William P. Barr organized a $30,000 family gathering at the hotel, and most Republican senators visited the hotel for regular meetings.

Recently, Trump fixer Rudy Giuliani has been photographed there repeatedly with various associates, including the two financial guys now facing trial on charges stemming from their roles in the Ukrainian affairs behind the current impeachment effort. There is absolutely nothing wrong with meetings or bookings at the hotel by Americans, of course, or even non-Americans, unless they are doing so to win favor with the president.

After all, that has been the force of the talk about enforcing the emoluments clause. Multiple court cases so far are undetermined. Courts to date have dealt instead with who has appropriate standing to bring the challenge.

Trump himself has gone so far as to call this black-letter rule “the phony emoluments” clause and has repeatedly applauded himself for a unique ability to run a business while serving as president.

So then, why is Trump interested in selling the hotel? Estimates are that Trump’s company made $81 million from the hotel last year, so it couldn’t be for money alone. But it couldn’t be over the ethics issues here either, could it? Trump doesn’t acknowledge there is a rule setting an ethical standard for his behavior.

My own sense is that from a company point of view alone, Trump has tired of constant bickering about his ownership of a fancy hotel on Pennsylvania Avenue. While he may not agree with the idea of an emoluments clause, his lawyers, financial advisers or others must be warning him that a reckoning could be nigh, whether as part of the impeachment process or in the growing legal assaults on him.

It is, of course, possible that Trump has been warned that violation of the emoluments clause – not limited to the Trump hotel – could end up being another count in an impeachment process. The announcement of a possible sale of the hotel might be enough to protect his property as well as his presidency in such a consideration.

Much as he walked away from offering his Doral property in Miami for next June’s international G-7 meetings following a ton of outrage about inappropriateness, perhaps Trump’s sudden acknowledgment of ethical principles comes simply from not wanting to hear a steady drumbeat of criticism – even if he doesn’t understand it.

There was a much smaller note last week about the Trump Organization removing the eponymous Trump name from two Central Park ice skating rinks. There was no explanation, but there was an acknowledgement from Trump’s company that the presence of his name is no longer working to bring in new business. Indeed, seeing Trump on the name of buildings seems to be sending people away.

In the end, Trump may not sell the hotel at all or choose to sell it because he can make so much money in one fell swoop that it would enable him to leave Washington altogether and consider a life in retirement.