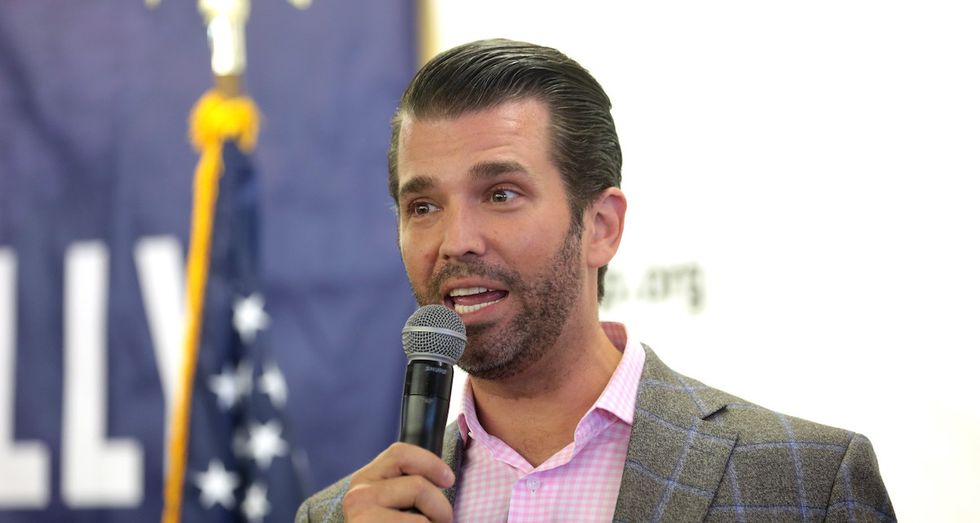 The University of Florida’s student government served the school’s student body president with an impeachment resolution over a campus appearance by Donald Trump Jr. and Kimberly Guilfoyle, which cost the school $50,000.

The impeachment resolution, published by the Tampa Bay Times, accuses student body president Michael Murphy of “malfeasance and abuse of power” for spending $50,000 from mandatory student fees to bring the president’s son and his girlfriend to campus in October.

“Murphy not only endangered students marginalized by the speakers’ white nationalist supporters but also abused his power to advance a particular political party at the expense of the students he should represent," the resolution says.

The event drew protests last month from students angry that student activity fees were used for the event, WESH-TV reported. Every student pays a $500 student activity fee each year, though some are paid through scholarships and aid funded with public tax dollars.

Organizers of the event claimed that the speech was not about politics, even though the couple spent much of their appearance praising the Trump administration, NBC News reported. The event was organized by Caroline Wren, a consultant to Trump’s re-election committee.

Murphy claimed to The Alligator that the student government reached out to Don Jr. about the event, but emails obtained by the student newspaper showed that Wren first contacted Murphy after they met at a party. Wren claimed to the paper that she emailed him “via my private email in my personal capacity and mistakenly forgot to remove my Trump Victory signature.”

The Tampa Bay Times reported that Murphy has attended Trump events in the past and his father donated more than $5,000 to Trump’s campaign earlier this year. Murphy told The Alligator that he also tried to bring Sen. Bernie Sanders, I-Vt., for an appearance at the campus. The newspaper confirmed that Murphy reached out to the Sanders presidential campaign but aides declined, citing the candidate’s schedule.

Half of the student body Senate will vote on whether to impeach Murphy, which would result in his suspension as president, and the other half would then decide whether to remove Murphy from office permanently.

Student senator Ben Lima, who is leading the impeachment push, disputed Murphy’s claim that the speech was not a campaign event during a student government meeting last week, the Tampa Bay Times reported.

“If this was not a campaign event, then why was the student body president in communication with the Trump campaign to bring these speakers to campus?” he asked.

“The Trump campaign doesn’t need favors by anyone in student government," Rojas said. “[Murphy] is not here to support Donald Trump’s reelection campaign, and UF student money is not his personal piggy bank.”

The parallels to Trump’s own impeachment saga in Washington were not lost on the student government.

“I don’t think you ever envision that it will be necessary to take this step,” Lima told the Tampa Bay Times. “But it’s one of the measures that is there to hold our officials accountable. When the time comes, we shouldn’t be afraid to use it — no matter the level of government."