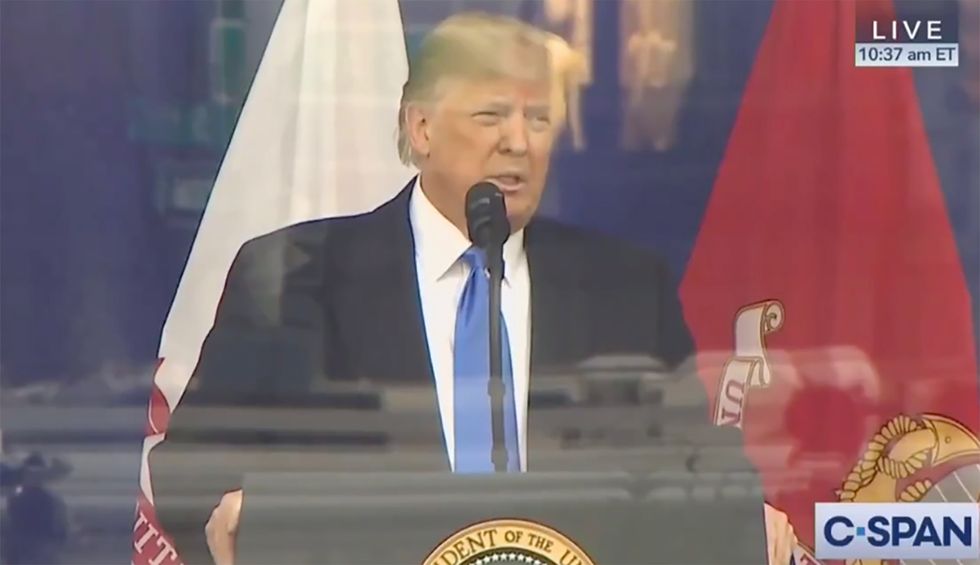 President Donald Trump continued his strategy of using his office for political gain, including re-election, by delivering for the first time a speech in New York City on Veterans Day. Trump recently attended several sporting events where there were protests against him, and today was no different.

Surrounding Madison Square Park in Manhattan are several tall buildings, some of which featured signs that read “Impeach,” “Impeach and convict,” and “Dump Trump.” Outside the Manhattan park where Trump was speaking chants of “lock him up” and “impeach and remove” could be heard.

Incredibly loud protests outside the Trump speech along Fifth Avenue, with whistles, chants of "Lock him up!"
— Maggie Haberman (@Maggie Haberman)1573486568.0

Recent reports show Trump has decided to ignore the historic separation of a president’s political campaign and his public appearances and the use of the White House. After being caught fraudulently fundraising, last week Trump announced he would host the winner of a social media contest promoting his campaign at the White House.

Here are some of the protests of Trump’s Monday speech in New York City.

Trump decided to come to NYC again. And hide behind veterans at our Veterans Day parade. So New Yorkers showed up… https://t.co/PGZMQCqE5k
— Joshua Potash (@Joshua Potash)1573486359.0

Protesting Trump at the NYC Veteran’s Day Parade. Trump deports vets, fires them (Vindman), and privatizes their he… https://t.co/nSZCjPbBCU
— Rise and Resist (@Rise and Resist)1573486913.0