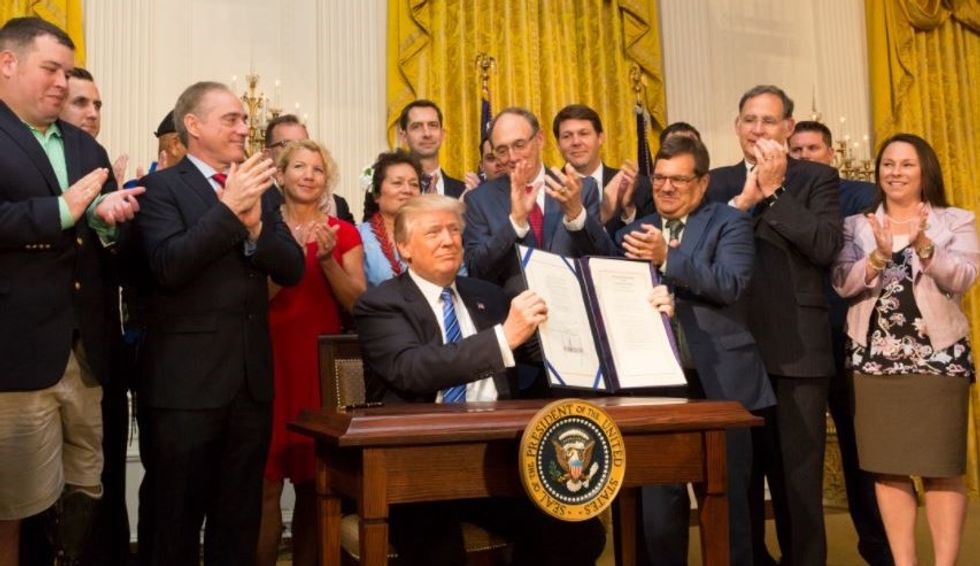 President Donald Trump announced on Monday that he signed legislation that has, in fact, been law for many years:

On June 23, 2017, Trump did sign the Department of Veterans Affairs Accountability and Whistleblower Protection Act — which is the law that the tweet he quoted referred to.

The Ukraine scandal, which has led to Trump's impeachment proceedings, was sparked by a whistleblower complaint filed under the 1998 law, which offers significantly less protection than the 1989 law. It does, however, require that whistleblowers not face retaliation — though it provides no enforcement mechanism for this provision.

Trump seems to be bemoaning the irony of the fact that he signed a whistleblower protection law (even though he doesn't seem to know which one), and he now finds himself under political threat because of a whistleblower. He may also be suggesting that he shouldn't be criticized for going after the whistleblower, given that he signed such a law, though the first reading seems more plausible.

But Trump has previously championed the VA law, which sought to protect whistleblowers for good reason. The troubled agency has long been accused of underserving veterans, and enabling employees to report waste, fraud, and abuses could help improve the department's ability to serve its clients. Of course, this is why whistleblower protections in all agencies and businesses are a good idea — they can help expose wrongdoing.

Trump, though, is much more interested in concealing his own wrongdoing than actually helping governmental institutions function better, so it makes sense that he may be rethinking his stance on whistleblower protections.

Maybe then it's not so surprising that the VA whistleblower law seems to be having trouble of its own, as CNN's Daniel Dale noted: