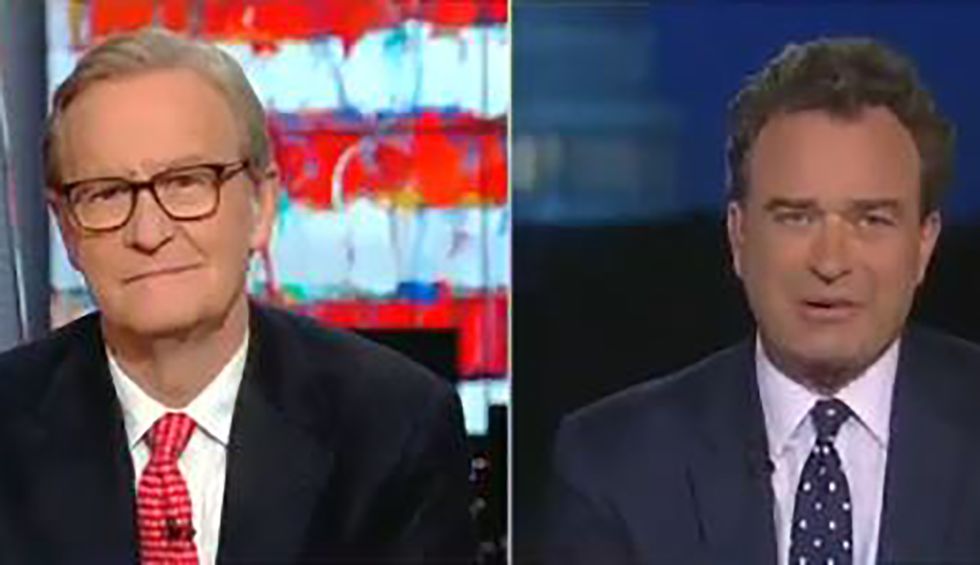 A “Fox & Friends” interview went off-the-rails when the opinion editor of a right wing media outlet tried to discredit House Democrats who begin open impeachment inquiry hearings against President Donald Trump today. But it seems The Washington Times’ Charles Hurt managed to only discredit himself, based on social media responses.

“When you hear Adam Schiff and other Democrats use all these squirrelly words like ‘quid pro quo,’ ‘bribery,’ all these things, it’s all because they can’t specify exactly where Donald Trump broke any law or did anything particularly wrong,” said Hurt, who is also a Fox News contributor, and a contributor to the far right wing outlet Breitbart.

Much of America already knows that Democrats do not have to prove Trump broke any laws to be impeached. The Founding Fathers purposely structured impeachment in the Constitution to give Congress broad powers and leeway to determine what “high crimes and Misdemeanors” means. But it also specifically mentions bribery as an impeachable offense along with treason.

@revrrlewis @mmfa The Washington Times editor needs to be fired for his own good — so he can go back to university… https://t.co/mBsGO9GCSX
— Observer (@Observer)1573647732.0

@revrrlewis You would think an adult in the news business would look that up, and that someone dealing regularly in… https://t.co/9JP8cRwONw
— StickyBunny (@StickyBunny)1573647718.0

Experts: there doesn’t have to an actual crime for a conspiracy to take place. https://t.co/UGV40UryeN
— Jonathan Landay (@Jonathan Landay)1573650870.0

Just in case you are feeling incompetent or stupid or both, enjoy the linguistic brilliance or the Washington Times… https://t.co/iDkjldYMek
— Captain Mike (@Captain Mike)1573651266.0

Thanks to Media Matters’ Bobby Lewis for the video clip, and for watching “Fox & Friends” so we don’t have to.