'The Battle in Seattle': How we shut down the World Trade Organization 20 years ago 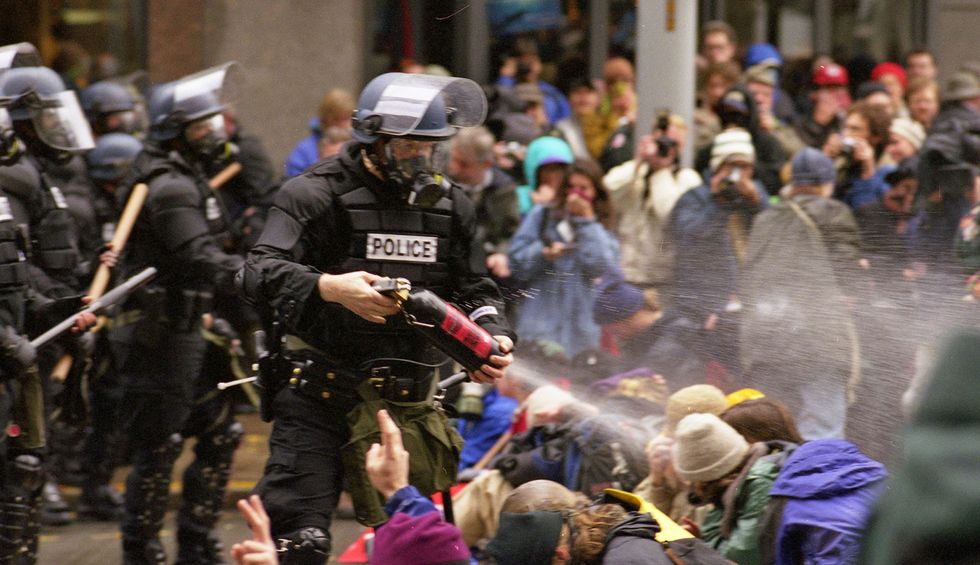 On November 30, 1999, a huge gathering of environmentalists, labor unions, and human rights activists gathered at the World Trade Organization’s meeting in Seattle to protest the WTO’s “free trade” agenda. The police responded with tear gas, mass arrests, and civil rights violations. Twenty years on, veteran activist Lisa Fithian recalls the scenes in the streets and the ongoing significance of what became known as “The Battle in Seattle.”

On the morning of November 30, or “N30,” I woke up around 4 o’clock, unable to sleep. I ate a good breakfast and downed a quick cup of coffee, then bundled up in my blue winter coat and black hat, with a couple of layers underneath in case I was arrested. Layers are good as jails tend to be very cold, and if you are just being processed before release, you typically wear your own clothes.

Nadine, Hilary, and I were rolling as a team that day. We set off around 6, heading to Victor Steinbrueck Park, about 10 blocks from the convention center near the waterfront. Hundreds of people were already there. One of my jobs was to inform the crowd of the plan, so I climbed on top of a van to be seen and heard. Our goal was to assemble into large flying squads that would “fly in” wherever one of the pie blockades needed assistance. I wanted everyone to have a shared vision of our mission. In my experience, the more people hold a common vision, the greater the possibility of it happening. As people streamed into the park, the police harassed us in any way they could. One of the funnier moments was when a group showed up with a giant prop carrot. The police were beside themselves. They were not used to dealing with giant carrots, so they searched that entire group and wouldn’t let any of them into the public park. Last time I checked, giant carrots are not against the law.

Information started to come in that the blockades were being deployed. The police were reportedly trying to push through, so we knew it was time to fly! I jumped back on the bullhorn and said, “We are ready, let’s roll!” We moved up Virginia Street and turned right on Pike Place, then left onto Pike Street, which would take us straight to the convention center. This was a big commercial area of Seattle with popular stores like Nordstrom and Gap.

The back half of our march broke off to support the blockade on the west and south sides of the convention center. Since our numbers were so big, we decided to bring more folks to the north, near the Paramount Theatre, the location of the opening ceremonies. Once there, we saw that the police had surrounded the theater’s entrance with metro buses and a net fence, which we pushed right through.

It was about 8 a.m., and from what I could tell, we were effectively shutting everything down. In every direction I looked, there were blockades in place. Some people were making human chains by linking arm-to-arm, while others locked down to “sleeping dragons,” which are tubes constructed for people to put their arms into and lock onto a bar secured inside, forcing the police to cut you out. These tactics were developed by deep-woods activists struggling to save old-growth forests. Seattle was the first time I was aware of them being used in an urban setting.

At this point the police were starting to retaliate, so Nadine, who was pregnant, moved to a safer location not far from the action where she could help with reconnaissance. Hilary and I were buddies for the rest of the morning, moving from site to site. (At the next action we did together, Nadine already had her daughter, and Hilary arrived pregnant, so it was her turn to stay out of the fire.)

A festive atmosphere was taking hold as we swarmed the area. Ladders appeared out of nowhere and people climbed on top of the buses. There were puppets and flags and giant cardboard ears of corn. Everywhere, people were dressed like butterflies and turtles. I stepped away from the group and took a few minutes to walk around, in awe of what was happening. People were free. No one was in charge. And it was working!

I was struck by how otherworldly it was. There was a giant puppet of Death and another of a beautiful brown-skinned woman who stood tall in power. I turned the corner to find a giant in inflatable whale moving slowly above the crowd. The Infernal Noise Brigade, a radical Seattle marching band, passed by in full formation, all wearing furry black hats and black jackets. The drum major in front had a green wooden gun that she was twirling with great joy. The sound was incredible. As I continued to move, I came across an intersection with a bunch of young women hula-hooping their hearts out in front of a line of police. A giant inflatable Earth was being tossed around by the crowd behind them. There were all kinds of creative signs like, “CLEAR CUT THE WTO” and “WORLD TERRORIST ORGANIZATION” and “DON’T TRADE OUR FUTURE!”

A lone tuba player was set up on a corner playing with a great set of lungs. Hope he stays out of the tear gas, I thought as I caught a whiff of it lingering in the air.

On another corner, some young folks were tossing newspaper stands into the streets and banging on them like drums. Down the street, a group of cheerleaders had climbed up on a cement wall and were doing a set of radical cheers: “My Back Is Aching, My Bra’s Too Tight, My Booty Is Shaking from Left to Right, Sound Off Revolution!” There was a queer bloc: “We’re Here, We’re Queer, Get Used to It!” Others could be heard shouting “Down, Down, WTO!” Around another corner there was a PGA march of people from the Global South, including farmers from many countries, chanting and holding up signs. I had been in a lot of protests and mass actions, but never before had I seen this array of movements coming together with a common cause.

I made my way back to the front of the Paramount Theatre, and within minutes we heard that the opening of the ministerial had been delayed because delegates could not get in. A roar of celebration could be heard from block to block.

The Battle of Seattle marked a shift in movement organizing, both in the United States and around the world. In the immediate sense, the shutdown succeeded in delaying the ministerial and emboldening the delegations from the Global South, who withdrew their consent. Any hope for an agreement unraveled and the talks collapsed. More important, the Battle of Seattle put the power brokers in the WTO and in governments around the world on notice: The people would not allow them to move forward without resistance. Mainstream NGOs still wanted a seat at the table to fight for protections for the people and the planet, but the direct actionists earned their respect, developing important relationships as we built a movement to disrupt whenever and wherever we could.

The Battle of Seattle also marked a new era of police brutality against peaceful protesters. The police unleashed a terrifying assortment of military-type “nonlethal” weapons including tear gas, pepper spray, projectiles, concussion grenades, sound bombs, and armored vehicles. While police violence has always existed, the militarization of police was growing.

The anti-WTO protests spawned the growth of new organizations and collectives: the Continental Direct Action Network, the Independent Media Centers, and the Radical Cheerleaders, to name just a few. Efforts to build a larger, more cohesive movement became possible as the Teamsters and the Turtles, the AFL and the Anarchists found common ground. Models of intergroup cooperation developed. We were on the offensive, targeting the capitalists in the WTO, the International Monetary Fund, and the World Bank; at the summits of the G8, G20, and World Economic Forum; and in transnational trade deals like the Free Trade Area of the Americas.

Conversations about racial divides in the movement came to the forefront. Some of that debate was initiated by an article, “Where Was the Color in Seattle?” by Elizabeth Martínez, an American Chicana feminist. This conversation was long overdue, opening up the challenges and opportunities that exist when we try to work across the racial divide. Martínez’s article spoke to the lack of people of color attending the Seattle protests and the whiteness of the DAN [Direct Action Network] convergence space and the labor union rally. But it also spoke to how empowering Seattle was for many of the people of color who did participate in the direct actions.

This conversation spread to many corners of our movements. As we looked to the new millennium, we organized to incorporate anti-racism work into spaces that had been dominated by white people while fostering new allegiances and alliances between white communities and communities of color. This was particularly true in 2000, during the Democratic National Convention protest in Los Angeles.

In the end the direct-action movement in Seattle took everyone by surprise. From the state and feds down to the organizational allies, nobody believed we would actually shut down the WTO. Nobody believed we had that power. But in the words that were chanted again and again by the Chicano/a students of the Movimiento Estudiantil Chicano de Aztlán on the ground in Seattle: “Ain’t no power like the power of the people, ’cause the power of the people don’t stop!”

This edited excerpt from Shut It Down: Stories from a Fierce, Loving Resistance by Lisa Fithian (Chelsea Green, 2019) appears by permission of the publisher.

Lisa Fithian is an anti-racist organizer who has worked for justice since the 1970s. Using creative, strategic nonviolent direct action and civil disobedience, she has won many battles and trained tens of thousands of activists while participating in a range of movements and mobilizations, including Occupy Wall Street, anti-WTO and corporate globalization protests all over the world, the climate justice movement, and more.