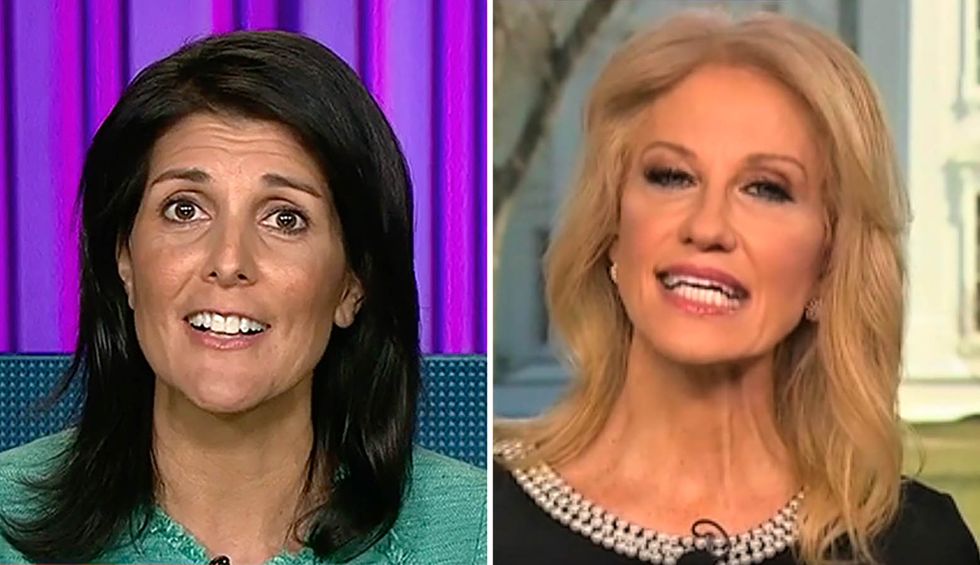 Former Secretary of State Rex Tillerson denied that he had attempted to undermine President Donald Trump while in his Cabinet, casting former United Nations ambassador Nikki Haley, who made the allegation, as a rare participant in key meetings.

“During my service to our country as the secretary of state, at no time did I, nor to my direct knowledge did anyone else serving along with me, take any actions to undermine the president,” Tillerson said in a statement to the Washington Post.

Tillerson said his conversations with Trump were “always candid, frank and my recommendations straightforward.”

“Once the president made a decision, we at the State Department undertook our best efforts to implement that decision,” he added. “Ambassador Haley was rarely a participant in my many meetings and is not in a position to know what I may or may not have said to the president. I continue to be proud of my service as our country’s 69th secretary of state.”

Tillerson’s statement came after Haley alleged in her new book and multiple television interviews that he and former White House chief of staff John Kelly tried to recruit her into an effort to subvert Trump over an internal dispute about United Nations funding for Palestinians.

Haley claimed in her new book “With All Due Respect” that Tillerson and Kelly had urged her to ignore Trump’s demands and work with them to resist his policies.

“Kelly and Tillerson confided in me that when they resisted the president, they weren’t being insubordinate, they were trying to save the country,” Haley wrote. “It was their decisions — not the president’s — that were in the best interests of America, they said. The president didn’t know what he was doing.”

Haley claimed that Tillerson had warned her that people would “die” if the president were left unchecked.

Haley acknowledged in the book that she and the former secretary of state had “differences.” Haley wrote that she found Tillerson to be “exhausting,” alleging that he was “dismissive of my opinions.”

Though Tillerson denied Haley’s claim, Kelly issued a statement to CBS News saying that if providing Trump “with the best and most open, legal and ethical staffing advice from across the [government] so he could make an informed decision is ‘working against Trump,’ then guilty as charged.”

A senior White House official told The Post that Haley’s account of the dispute about Palestinian funding was “absolutely accurate.”

“It’s 100 percent accurate and it fits a pattern” in which advisers tried to undermine Trump, the official said.

Haley also tweeted that she told Trump about her concerns about Kelly and Tillerson. She later told CBS News that she found their efforts “offensive.”

Haley has spoken glowingly of Trump and vehemently defended him during numerous interviews on her book tour.

“I saw a president that was very thoughtful — looked at all of the issues, made decisions — and it was a pleasure and honor to work with him,” she said.

Haley also said that Trump did not deserve to be impeached for a whistleblower's claim that he tried to solicit Ukraine to investigate former Vice President Joe Biden.

She later added that Congress should investigate “President Obama’s role” in the “Russia situation.”

On the "Today" show, Haley insisted to NBC News’ Savannah Guthrie that Trump was a very honest person.

“In every instance that I dealt with him, he was truthful, he listened and he was great to work with,” she said.

Haley’s transformation into a Trump apologist has raised questions about her motives. Some analysts have suggested that she is trying to position herself as a Republican presidential contender for 2024 by ingratiating herself to Trump’s base and the president himself. Others have claimed that she is trying to replace Vice President Mike Pence as Trump’s running mate.

“I find her statements on this not particularly credible. I think they speak to her ambition,” former Republican strategist Steve Schmidt said on MSNBC’s “Morning Joe.” “It’s about currying favor. She wants to be vice president on the Republican ticket in 2020, and I think there’s an overwhelming chance that Trump will dump Pence to put Nikki Haley on the ticket.”

Host Joe Scarborough laughed at the clip of Haley claiming that Trump was always truthful, pointing out that “this is just one of those moments where we need to just stop and actually you can just smell the corruption in Washington, D.C.”

“You see the impact of Donald Trump — how he corrupts everybody that’s either close to him in his orbit or who want to be in his orbit,” he added. “I will say it is actually, personally, it’s very sad.”