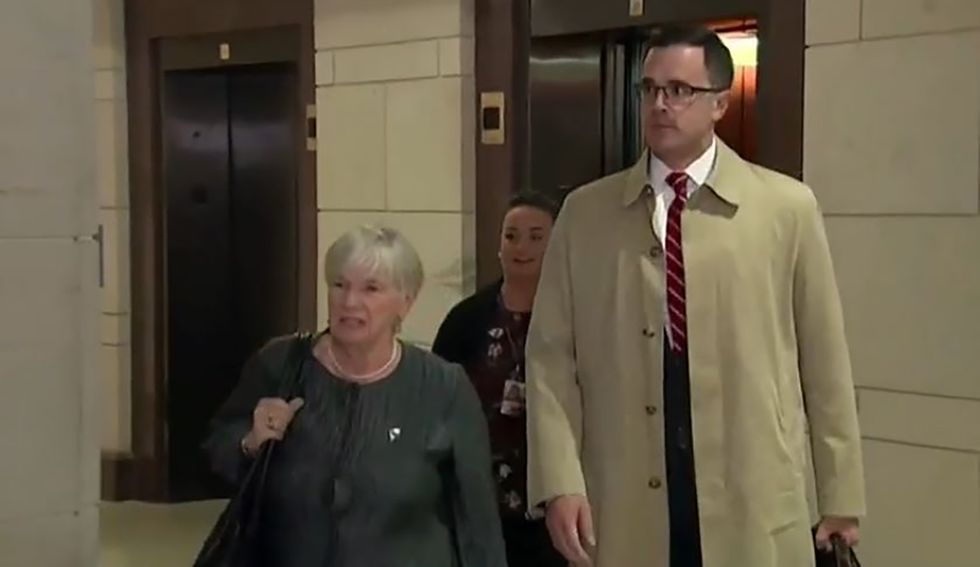 Republicans have latched onto a single line in Thursday’s testimony by White House Russia expert Tim Morrison like it’s the last life raft in a stormy sea. In his opening statement before the House impeachment inquiry, Morrison explained that he was there for the phone call Trump made to Ukrainian President Zelensky on July 25, and he “was not concerned that anything illegal was discussed.” So far as the GOP—and Trump’s morning tweets—are concerned, that’s the end of the show. Impeachment over. Everyone drive safe getting home.

Unfortunately, while that line and a few others, such as a Morrison explaining that the security assistance did get released eventually so everything turned out peachy, might be starring in Republican’s Friday morning declarations of victory, the rest of what Morrison had to say was what everyone else had to say. In summary: Trump did it.

“It” would be pressuring Ukraine to announce investigations into a pair of conspiracy theories, one having to do with unsupported claims about Joe Biden and the other wrapped around a ludicrous theory of “Ukrainian interference” in the 2016 election. Take away all the “please don’t kick me, I’m leaving anyway” adornments added to Morrison’s testimony, his statements almost completely verify the testimony that had come earlier from Ambassador William Taylor. And Taylor’s testimony is easily regarded as the most damaging of any provided so far.

But the idea that Morrison’s testimony only confirms the testimony of Taylor that Trump and his supporters were busily subverting the diplomatic process in favor of using Ukraine as a means of “proving” that Trump did nothing wrong in 2016 and providing political capital for 2020 doesn’t make a good GOP ad. Instead, Republicans burned up the airwaves overnight, and on Friday morning, with chest-pounding declaration that Morrison’s testimony was “devastating to the Democrat narrative.”

What Republicans aren’t saying is that Morrison’s testimony confirms that of Taylor. They’re also leaving out that part about how Morrison found Trump’s statements to Zelensky so disturbing, that he asked for them to be buried beneath the biggest rock he could find.

In his opening statement, Morrison’s statement that he wasn’t “concerned” about anything illegal in Trump’s talk with Zelensky apparently did not mean he wasn’t concerned about that talk. Because it was immediately preceded by three sentences worth of … boy, was he concerned.

After the call, I promptly asked the NSC Legal Advisor and his Deputy to review it. I had three concerns about a potential leak of the MemCon: first, how it would play out in Washington's polarized environment; second, how a leak would affect the bipartisan support our Ukrainian partners currently experience in Congress; and third, how it would affect the Ukrainian perceptions of the U.S.-Ukraine relationship. I want to be clear, I was not concerned that anything illegal was discussed.

So, even though Morrison’s last sentence there says his worries didn’t come because he thought there was something illegal, he did think that the memo was: partisan, likely to wreck support for Trump’s Ukraine policy, and damaging to the U.S./Ukraine relationship.

Oddly enough, that’s not the part Republicans are using in their morning statements.

These concerns led Morrison to say that he asked that the transcript of Trump’s phone call be scooped off the normal White House servers and placed under password protection on the most secure of NSC servers. This would seem to disagree with earlier testimony from NSC Ukraine expert Lt. Col. Alexander Vindman, who testified on Wednesday that the document had been placed on the server by White House attorney John Eisenberg.

But both things could be true. Morrison may have been just another who, like Vindman, informed Eisenberg that the transcript was one patata caliente before he wrapped it around an anchor and dropped it way, way down.

Overall, it’s very hard to find anything in Morrison’s testimony that looks good for Trump, except for the lines that Morrison duct-taped onto the facts expressing his gratitude for having made it through the White House, so far, without leaving in an orange jumpsuit.

If Republicans believe that having Morrison testify, in public, that he was so worried about what Trump said that he thought it had to be hidden is a good thing … they’re probably going to get that chance. Then maybe they can explain how they feel about the rest of Morrison’s testimony, which tells the same story as everyone else: extortion, deception, and abuse of power.

Morrison: “In preparation for my appearance today, I reviewed the statement Ambassador Taylor provided this inquiry on October 22, 2019. I can confirm that the substance of his statement, as it relates to conversations he and I had, is accurate.“

Side note: For those who have been wondering … Morrison is that tall. Seven-foot one. And for anyone who thinks he’s a lifelong public servant like some of the others involved in this story, the opposite is true. He’s a former aide for a Republican rep who spent the next decade as defense policy director for Republicans in the House. He’s regarded as a “nuclear super hawk” who was key to developing Republican policy attacking nuclear arms treaties.