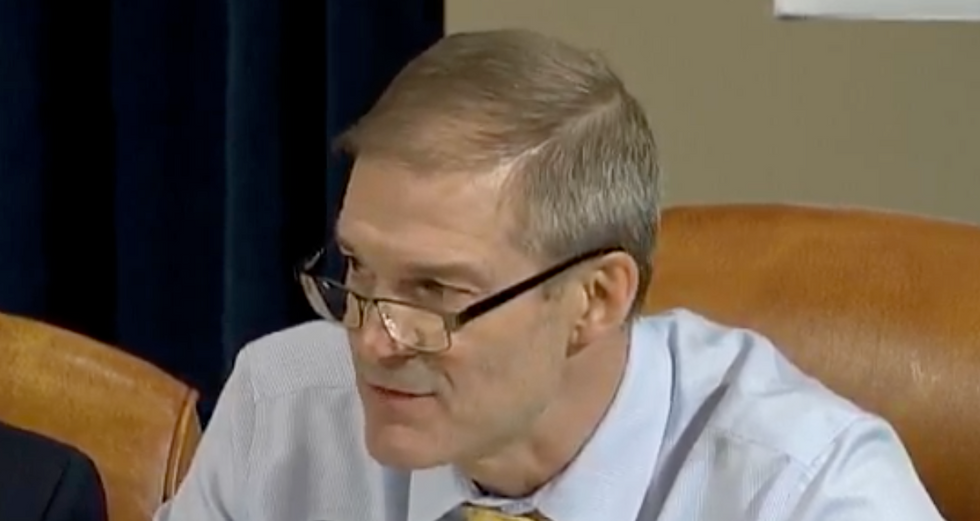 Republicans at the first public impeachment hearing on Wednesday kept deflecting from all the talk about President Donald Trump's effort induce Ukraine to investigate his political rivals to a separate point: corruption in Ukraine.

Rep. Jim Jordan (R-OH), for example, who was brought on to the committee specifically to be a mouthpiece for the president, called Ukraine "one of the three most corrupt countries on the planet."

He and his colleagues were trying to make the point, as other defenders of the president have claimed, that Trump had a legitimate interest in asking for Ukrainian investigations because the corruption in the country is very real. But in fact, the reality of corruption in Ukraine undermines Trump's defense, and the argument the GOP is trying to base around it is incoherent and paradoxical.

As Deputy Secretary of State George Kent noted in the testimony, demands for political investigations are a classic example of corruption.

"Regardless of the country, whether it's Ukraine, the U.S., or any country, the facts of law, criminal nexus, should drive the investigations of law enforcement officials," said Kent. "And it is not the role of politicians to be involved in directing the judicial systems of their countries or other countries."

But this is exactly what Trump was doing in his infamous July 25 phone call with Ukrainian President Volodymyr Zelensky, as well as in the "irregular" foreign policy channel orchestrated by the Rudy Giuliani. He was trying to start politically oriented investigations in Ukraine based on his desire for them, rather than on a legitimate law enforcement predicate.

Trump and his defenders suggest this is related to "corruption" in Ukraine, but corruption in Ukraine has never centered on the Democratic National Committee or the family of Vice President Joe Biden — there's no solid evidence that either were even directly involved in "corruption" in Ukraine. But as the July 25 call memo makes clear, they are all Trump cared about in asking Ukraine for investigations.

As Kent noted, this is never appropriate and not how criminal investigations should begin — in secret calls with weighty political investigations between two country leaders. And given, as the Republicans kept insisting on Wednesday, that corruption is a real problem in Ukraine, the president's demands were more egregious, not less.

There's no reason a U.S. president should ask a foreign country to investigate whether American citizens broke their laws; if there's reason to suspect they broke the law, that should be the concern of U.S.  law enforcement officials. But it's especially bad if a U.S. president asks a corrupt country to investigate Americans citizens, because that just makes it all the more likely that the Americans will be subjected to a corrupt investigation. Investigations of this kind can lead to prosecutors extorting the subjects for money in exchange for not prosecuting. Or, in a case where it's clear the investigation is important to the leader of an important foreign ally, the corrupt government might be inclined to contrive a case against the American citizens just to please that leader.

Either way, given Ukraine's history of corruption, the president had even more reason than usual not to ask the country to investigate his political rivals and/or American citizens.

Republicans can't really avoid bringing up Ukraine's corruption, though, because Trump's central claim in his defense is that he just wanted the country to clean up its corruption. Since that the evidence shows Trump only really cared about the Bidens and DNC, though, the president's defense is just a paradoxical mess. There's no way to square the circle and argue that what Trump did was OK, so Republicans are just inevitably making it worse by talking about the facts.

This suggests that in the days ahead, they'll likely lean into discussing issues that are a complete distraction from the matter at hand.