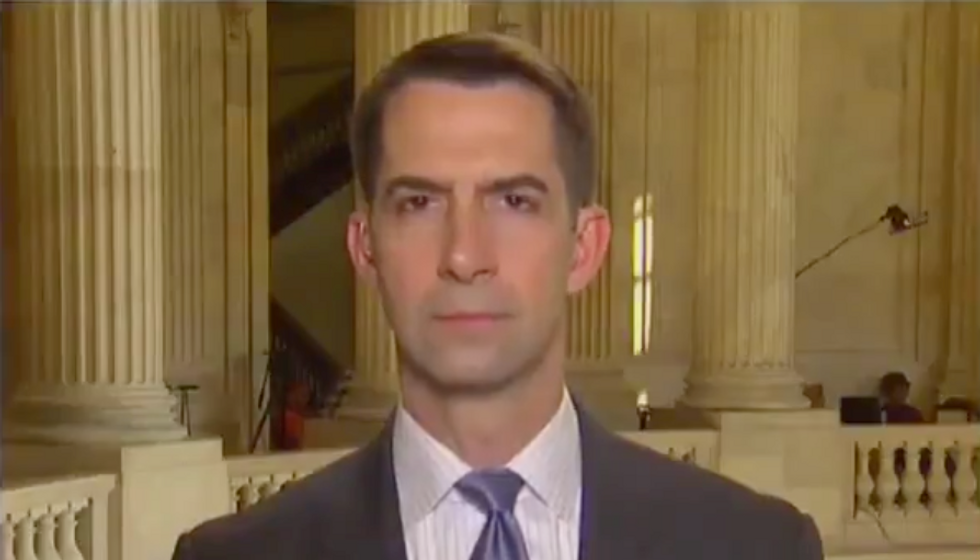 Republican Sen. Tom Cotton of Arkansas openly called for President Donald Trump to send military forces across the U.S. border into Mexico to address cartel violence in the region while he was speaking to Fox News on Wednesday.

Cotton was addressing the recent horrific killing of at least nine Americans, including six children, in what has been described by media reports as a "highway ambush."

"This is the deprave massacre of three women and six children," he said. "Cartel violence in Mexico has reached an all-time high over the last year, murders have surged under President López Obrador's policy of 'hugs not bullets.' I mean, that may be nice for a children's fairy tale, but in the real world when the bad guys and cartels have .50 Caliber Machine Guns, the only answer is more bullets and bigger bullets. And if Mexico can't protect American citizens in Mexico, then we may have to take matters into our own hands."

He continued: "Look, our special operations forces were able to take down al-Baghdadi in Syria a couple of weeks ago. They did it to Osama bin Laden in Pakistan eight years ago. I have every confidence that if the president directed them to do so, they could impose a world of hurt on these cartels a few dozen miles away from the American border."

What this constitutes — sending military units in an attack on Mexican soil as we "take matters into our own hand" — is an invasion of a sovereign country and a friendly U.S. neighbor. And while the attack that inspired Cotton's attack was indeed devastating, it must be remembered that the United States has little high ground to stand on in this regard.  Thousands are murder by gun violence every year in the United States, including in massacres that are frequently larger than the Mexican attack Cotton is referring to. When these attacks are carried out by Americans on American soil, Cotton and the rest of the GOP shrug their shoulders and say that nothing can be done to stop gun violence in the U.S. But apparently if they happen just south of the U.S.-Mexico border, it gives Trump a license to invade the country, in Cotton's view.