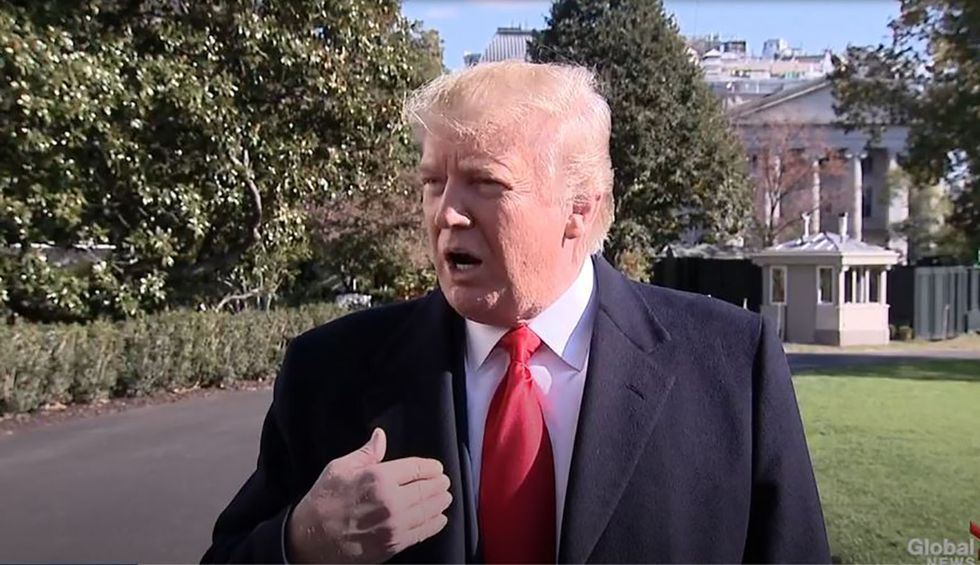 President Donald Trump complained to reporters that Fox News needs “a new pollster” nearly half of Americans said they wanted him impeached and removed from office in a recent survey from the right-leaning network.

“You’re reading the wrong polls. I have the real polls,” Trump told reporters outside the White House when asked Sunday about the survey results. “I have the real polls. The CNN polls are fake. The Fox polls have always been lousy. I tell them they ought to get themselves a real pollster. But the real polls — if you look at the polls that came out this morning — people don’t want anything to do with impeachment. It’s a phony scam. It’s a hoax.”

The Fox News poll invoked by Trump found that 49 percent of Americans want the president not only impeached but also removed from office, compared to 41 percent who oppose doing so and four percent who say he should be impeached but not removed. This results are roughly the same as the previous poll taken in early October, which found that 51 percent of Americans wanted to impeach and remove Trump.

The recent poll had similarly dire news for Trump’s approval ratings. Only 42 percent of voters approved of Trump’s job performance compared to 57 percent who disapproved of it. Although this is roughly the same as the numbers from early October, where the split was 43 to 55 percent, it shows a drop for the president since September (and also before the impeachment inquiry), when it was a 45-54 percent split.

The recent poll also indicated that voters do not predict the impeachment inquiry will go well for Trump. Fifty-five percent think it is at least somewhat likely that Trump will be impeached — a 17 percent increase from a June survey taken before the impeachment inquiry. It also found that a majority of voters believe that Trump asked Ukrainian President Volodomyr Zelensky to probe former Vice President Joe Biden and his son (60 percent) and held up military aid in order to pressure them into doing so (52 percent), although not all of those voters are convinced the president should be impeached for those actions.

Among the 41 percent who oppose impeachment, 57 percent say that nothing could change their mind. That amounts to roughly 25 percent of voters who would refuse to support impeaching Trump no matter what is revealed.

Trump has complained about Fox News in the past when the right-leaning network's polls produced unfavorable results for him. After Fox News released its early October poll last month, Trump tweeted that “from the day I announced I was running for President, I have NEVER had a good @FoxNews Poll. Whoever their Pollster is, they suck. But @FoxNews is also much different than it used to be in the good old days.”

Looks like Trump saw the new Fox News poll that shows his approval rating dropping and half the country wants him i… https://t.co/iiHf6ywGNb
— Justin Baragona (@Justin Baragona)1572804439.0