My God, I miss smoking 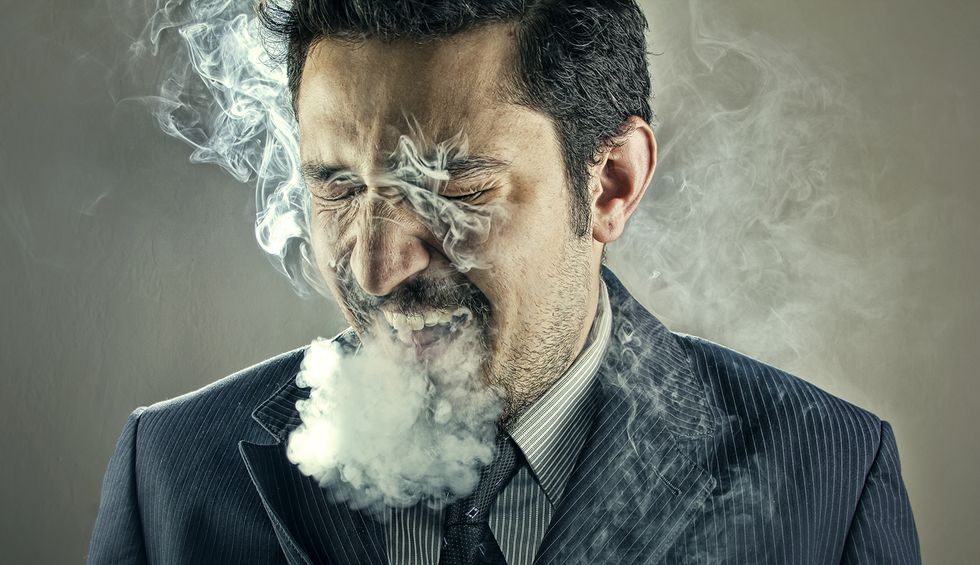 There is nothing glamorous about a piece of trash on a dirty sidewalk. The red cardboard box had been discarded with such casual disregard, its owner hadn’t even cared that there was a garbage can a foot away. It lay there on the sidewalk, surrounded by dead leaves and a single candy wrapper. Nevertheless, all I could think when I saw it was, “My God, I miss smoking.”

It’s not like I’m going to take it up again. It will not become my midlife counterargument to yoga retreats and kombucha brewing. I am quite happy to live in a world where we no longer pretend that airplanes and restaurants have magical force fields that can confine smells to designated sections. I like that my hair and my clothes — and those of the people I most enjoy hugging and kissing — do not reek like old ashtrays. It’s nice walking down streets that aren't strewn with butts. I enjoy spending money on things other than stinky, addictive substances. And I really love the whole thing where fewer people die of very preventable causes. But also, don't you ever just want to have a cigarette again? Just sit back in a public place and take a little trip to Flavor Country?

Smoking is the toxic, ugly boyfriend all your other friends hated. The one you still sometimes think, “Yeah, but we had some good times” about. For me, smoking will always be entwined with family, with travel, with adventure, with nostalgia. The smell of a cigarette is objectively disgusting; it’s also rooted in a profound and happy place in my memory. It’s one of the first aromas I ever knew. So let’s start there.

It seems completely insane now, of course, but I was born into smoking. My mother and I lived with my grandparents, and Pop was both a steady, serious drinker and a committed, day-long smoker. Into the home of my earliest years also steadily passed my three uncles, all of them similarly accessorized with a permanent Marlboro between their fingers. The women of the family, meanwhile, were either quiet, sneaky smokers in the alleyway or vehement protestors of the habit. I learned the emotional power and mystery of smoking young.

My Pop died of aggressive lung cancer before I turned three. Smoking eventually played a role of the deaths of all my uncles as well. But when I was little and my Nan’s sons would drop by, filling the house with noise and beers and the masculine perfume of Old Spice and tobacco, smoking always brought exciting disruption. This was a time, by the way, when you could still go to any corner store and buy candy made to look like cigarettes, starter packs for kids. I practiced constantly.

It nevertheless took a long time and many failed attempts to figure out how to smoke on my own. And I didn’t ever become truly proficient at it. In old photos that show me smoking, I always look vaguely puzzled, like I have no idea how this strange object arrived in my hand and I am awaiting instructions on what to do with it.

But I remember arriving in Dublin as a college student, and finding myself on a wet winter night in a tobacco stained pub made famous by James Joyce. Somebody handed me a hot whiskey with lemon and honey (I was still very much a Long Island iced tea person at the time). Someone else opened up a pack of Rothmans and pointed it toward me like it was the most natural thing in the world. I was instantly surrounded with new friends. At some point later, I remember fumbling to light a match and a girl explaining how to, in her words, “Strike it like a bloke.” The trick is to swiftly pull the match away from you, with no hesitation. I think of that, still, when I light the stove.

I never was a big smoker — I could go days without a single one and then demolish no more than half a pack in a night. Maybe that’s why I still associate it with something special, like a treat at the end of a long day. I remember visiting a friend in China, where she demonstrated her new skill at rolling her cigarettes as we polished off a feast of dim sum. I remember taking turns dragging on a single cigarette in the darkened kitchen of a man I was crazy about, an act that seemed somehow an intimate extension of what we’d been doing just prior. I remember having the excuse to linger with someone interesting, a little longer, communicated with the flick of a lighter.

Before cellphones, a cigarette was what you occupied yourself with when you wanted to look busy. No, I am not just standing here at the party with nothing to do like a loser; clearly I am deeply engaged in the business of polishing off this Silk Cut. Yes, I would love to dance with you, but I'm so sorry, I have this cigarette to take care of, like a needy pet. Sure thing, boss, I’ll schedule all those meetings for you — just as soon as I get back from my break. Gosh, I would like to meet that person over there; I will go over and bum or offer a cigarette, an instant shot of bravery. That bus is sure taking forever to get here; might as well smoke. I am nervous and stressed; at least this will grant the temporary feeling of reprieve.

I stopped for the same reasons everybody else did. It’s bad for you, it’s bad for the people you’ve living with, it’s expensive, there’s nowhere to do it any more anyway. Fifty years ago, roughly 40 percent of the American population smoked; now only about 14 percent does. Even among people who do smoke, the number of cigarettes they consume per day has plummeted. This is great news for our lungs, air, and wallets, and bad news for the tobacco industry, which isn’t going down without a fight.

As smoking has declined, vaping has skyrocketed, especially among youths. In a 2018 NIH survey, 37 percent of high school seniors said they’d vaped in the last 12 months. Granted, that number encompasses all vaping, but it does demonstrate the continued stranglehold that nicotine has, especially over the young and vulnerable. And the decline in smoking has not been felt proportionally across all Americans. The CDC notes that smoking rates have continued to be higher “among males, those aged 25-64 years, people who had less education, American Indians/Alaska Natives, Americans of multiple races, those who had serious psychological distress, those who were uninsured or insured through Medicaid, those living below the poverty level, those who had a disability, those who were lesbian, gay, or bisexual, and those who lived in the Midwest or South.” Smoking is toxic; it’s also a comfort device and a social bonding tool. I certainly understand that.

The last time I even tried to smoke — a defiant, condemned prisoner gesture after my cancer diagnosis — I got about three puffs in before giving up in nauseated disgust. The last time I really, really wanted to was November 9, 2016 — or as I like to call it, my worst birthday ever. I didn't. But in my hardest moments, some part of my brain still craves the brief, blissful, all is right feeling that only a deep inhalation of garbage can provide. I don’t suppose that will ever entirely go away.

I know that smoking is a thing that exists firmly in my past, and I hope, never becomes a part of my daughters’ present. I know that everything I miss around smoking can never be recaptured, because it’s all gone. The late nights. The bars with the dirty walls. My uncles, flicking ashes in a heavy amber ashtray in the middle of the table. Most of the time, I’m fine about it. But every once in a while, I’ll pass a stranger on the street and a familiar fragrance will drift into my nostrils. I’ll catch a memory of a friend. A feeling of a time. It'll feel heady and sweet. And then just as quickly, it’ll disappear. Up in smoke.