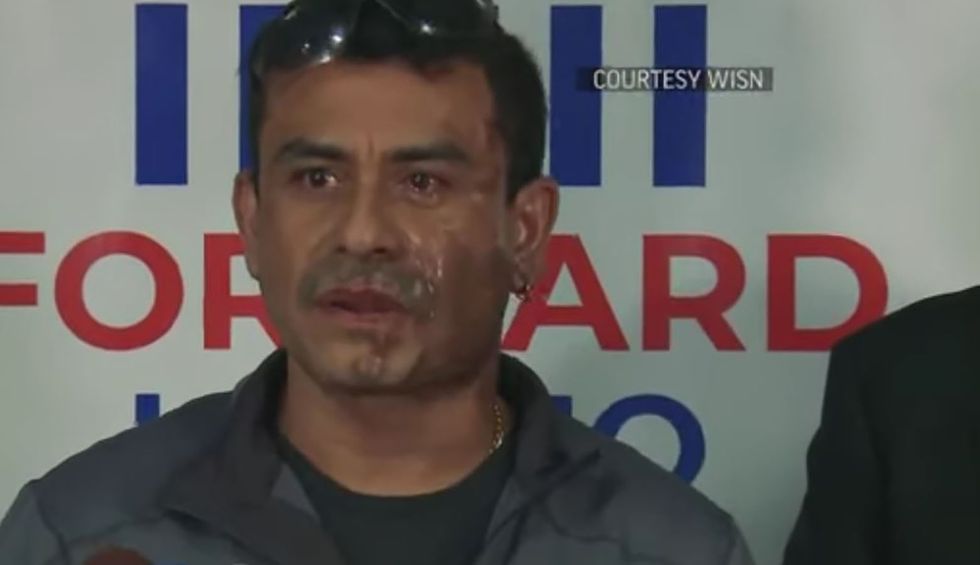 Milwaukee mayor Tom Barrett said Monday that President Donald Trump is responsible for violent hate crimes like an acid attack which left a 42-year-old man with second-degree burns in the city on Friday.

Mahud Villaluz told CNN affiliate WISN that a man confronted him over a parking spot, called him "an illegal," and told him to "go back to [his] country" before throwing battery acid at him. The incident was caught on surveillance video and a 61-year-old man was arrested in connection with the crime on Monday.

"My concern is that more and more people feel that because the president is saying it that this is okay," Barrett told CNN. "It's not okay, it's horrible."

"Everybody knows what's happening," the mayor said of Trump's encouragement of anti-immigrant sentiment and even violence. "It's because the president is talking about it on a daily basis that people feel that they have license to go after Hispanic people, and it's wrong."

The attack on Villaluz comes six months after the president laughed at a rally in Panama City Beach, Florida after an attendee shouted that migrants arriving at the U.S.-Mexico border should be shot.

"Only in the Panhandle you can get away with that statement," the president said at the rally.

Barrett added on Monday that the attack was "obviously" a hate crime. The city is investigating it as such, according to CNN.

Villaluz is a U.S. citizen who was born in Peru. He described the alleged attack in a press conference on Sunday.

"He started arguing, saying, 'Why you came here and invade my country? Why you came here illegally?'" he told reporters. "[I said], 'Sir, you don't know my status. I'm a U.S. citizen too. He got mad when I told him everybody came here from somewhere else."

"The rise of anti-Latino hate crimes during the Trump administration is directly related to Trump's extreme anti-Latino rhetoric and deeds," the group wrote on social media.