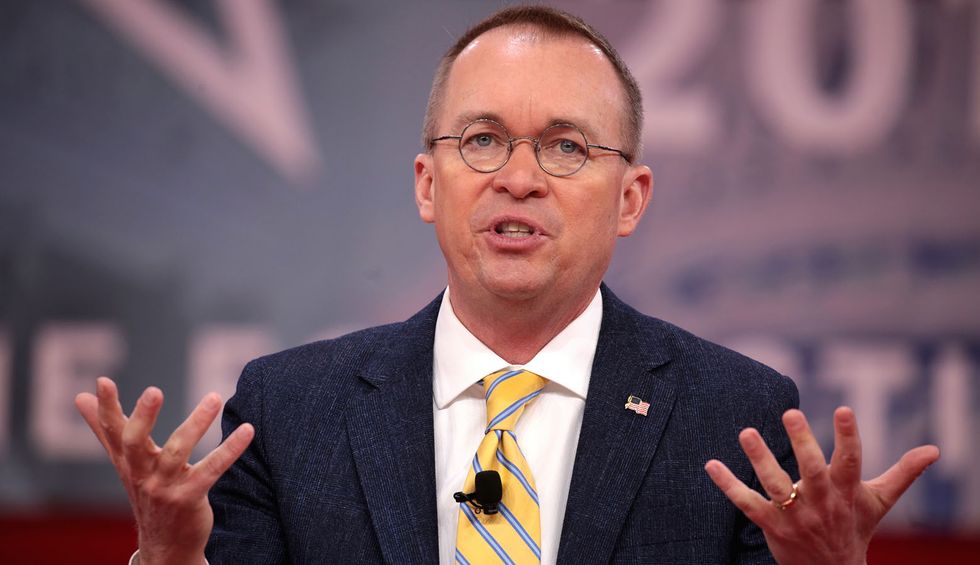 On Friday, Acting White House Chief of Staff Mick Mulvaney was hoping to join a lawsuit that seeks to clarify whether or not the U.S. House of Representatives can force former presidential advisers to testify as part of their impeachment inquiry against President Donald Trump. But Mulvaney, Politico reports, has dropped his efforts to join the lawsuit after a key player in the lawsuit — former Deputy National Security Adviser Charles Kupperman — and a federal judge both voiced their objections to his participation.

In a hearing on Monday, U.S. District Court Judge Richard Leon indicated that he was likely to oppose Mulvaney’s motion to join the lawsuit. The judge, according to a publicly released transcript, asserted, “I’m not inclined to grant the motion.”

Less than an hour after Leon made that assertion, Mulvaney’s attorneys, William Pittard and Christopher Muha, notified the court that they planned to drop their efforts to join the lawsuit. But they also said they will file a lawsuit of their own in which Mulvaney seeks clarification on whether he should comply with a subpoena from the House or follow President Donald Trump’s instructions that he not testify.

Last week, the Kupperman-related lawsuit seemed almost irrelevant when Democrats in the House dropped their subpoena of Kupperman — who is being represented by Charles Cooper, the attorney also representing former National Security Adviser John Bolton. Although Bolton did not show up for a deposition last week as House Democrats were hoping, they are still hoping that he will testify at some point and have been discussing the matter with Cooper. Bolton, according to Cooper, did not show up for the deposition because he is seeking clarification from a judge on whether he should agree to House Democrats’ request for testimony or follow Trump’s demand that current and former administration officials defy impeachment-related subpoenas.

The U.S. Department of Justice (DOJ), according to Kupperman, will “vigorously champion Mulvaney’s interest in the president’s assertion of absolute immunity overriding Mulvaney’s obligation to appear and testify in response to the House subpoena.”

Meanwhile, Muha is saying that Mulvaney did not waive immunity from testifying because he discussed impeachment and the Ukraine scandal at a recent press conference. Politico quotes Muha as saying, “The idea that Mr. Mulvaney has somehow waived broad immunity by speaking about this at a press conference, I think — (A) it doesn’t have any legs, and (B), it’s not the kind of issue that’s going to delay this case.”