Maria Butina blames 'racism' against Russians for her arrest 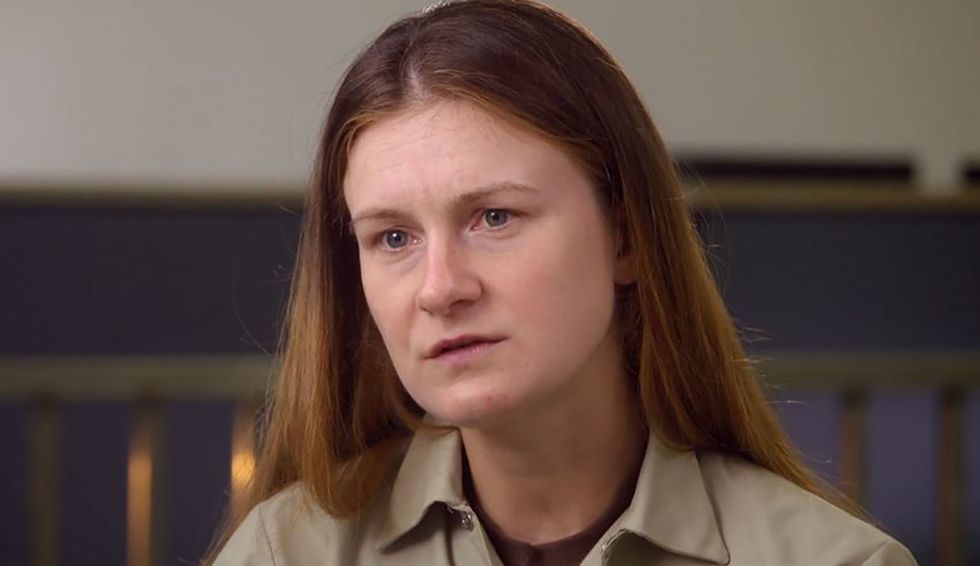 Maria Butina, the gun enthusiast who pleaded guilty to acting as a Russian agent in a plot to infiltrate conservative groups, claimed that “racism” against Russians led to her legal woes in an interview with “60 Minutes.”

Butina,30, was sentenced to 18 months in prison after she pleaded guilty to conspiracy to act as a foreign agent of Russia. Judge Tanya Chutkan said that Butina conducted a “sophisticated” operation, which “penetrated deep into political organizations” like the National Rifle Association. Butina was released last month after serving 15 months in prison and deported to Russia.

In her first U.S. interview since her release, Butina claimed Sunday that “racism” against Russians led to her incarceration.

“Let me take you back to 2016 . . . around the election time,” Butina told CBS News. “Do you remember at that time how American media treated Russia? Everything was toxic. Tell me that there is no racism here against the Russians. Oh, please — it is.”

She further claimed that her arrest “shows how broken the justice system in the United States is.”

U.S. intelligence agencies universally concluded that the Russian government directed efforts to interfere in the 2016 election in order to help President Donald Trump. Butina was later charged with attempting to infiltrate influential Republican circles ahead of the election.

Despite pleading guilty, Butina told host Leslie Stahl that the allegations against her were “nonsense.”

“I never sought to influence your policies," she said. "I came here on my own because I wanted to learn from the United States and go back to Russia to make Russia better."

Stahl noted that Butina was photographed with prominent Republicans like former Wisconsin Gov. Scott Walker and the president's eldest son and filmed pressing then-candidate Trump on Russian sanctions at an event in 2015.

"One of the goals of the Russian government at this point in time was to get rid of those sanctions. It was a major goal,” Stahl said.

"It was also a major goal for every Russian citizen that suffers today from these sanctions, I believe, that our countries shall not fight,” Butina responded.

Butina insisted that her frequent appearances at conservative events were merely “social networking.”

Stahl confronted Butina with text messages which suggested possible influence over one of Trump’s Cabinet picks.

Butina wrote to then-Russian official Alexander Torshin, who Stahl described as Butina’s “intelligence case officer,” that she believed John Bolton would be the secretary of state in the weeks after Trump’s election.

“Ask our people if they’re happy with that,” she wrote to Torshin. “Our opinion will be taken into account.”

Butina told Stahl that her ex-boyfriend, Republican operative Paul Erickson, instructed her to send that message. She denied knowing whether Torshin was close to Russian President Vladimir Putin despite writing to him that he was an “influential member of Putin’s team.”

“I hesitated to write that, but I thought it might — you know, it was a certain way to show off to Torshin and say, ‘Well, maybe I have high-level contacts here,’” she said. “It doesn’t suggest he’s close to Putin in any way,” she claimed.

Erickson was targeted by federal investigators in the Butina case and had his South Dakota home raided by the FBI. Agents found notes showing Erickson musing about a job offer from Russia’s intelligence agency and an email in which Erickson wrote that he was “involved in securing a VERY private line of communication between the Kremlin” and conservative leaders using the NRA as a “conduit.” Erickson was never charged in the case. He has since pleaded not guilty to 11 counts of fraud and money laundering in connection to a different case related to his business.

John Demers, the assistant attorney general for national security, told Stahl that Butina’s “60 Minutes” interview was a “masterpiece of disinformation.”

“When she was talking to you in your interview, her audience wasn’t the American people. It was Vladimir Putin and all the people in Russia who are going to decide her fate when she goes back there,” he said. “I have very little doubt that the Russian government will leverage [Butina] as an instrument of propaganda to say, ‘Here was this poor, young, idealistic Russian student and look what happened to her. They threw her in jail for 18 months.’”

Since her release from prison, Butina has spoken to multiple Russian media outlets. She said she spent more than 100 days in solitary confinement while in prison.

“I don’t know why they had to be so cruel,” she told the state-owned outlet RT. “I tend to think — this is just conjecture — that maybe they were trying to break my will or something like that, learn some secrets. But I didn’t have any secrets.”

Demers said that Butina never got hold of “classified information,” but “that’s not what she was doing here.”

“She was an influence agent. She was getting access to Americans, who she thought were close to power in America,” he told Stahl. “What makes her so dangerous is that the people she’s contacting don’t know that she’s there taking direction from the Russian government.”

You can watch the full "60 Minutes" report below: