Less than a week after World Series jeers, Trump was booed at UFC fight in NYC 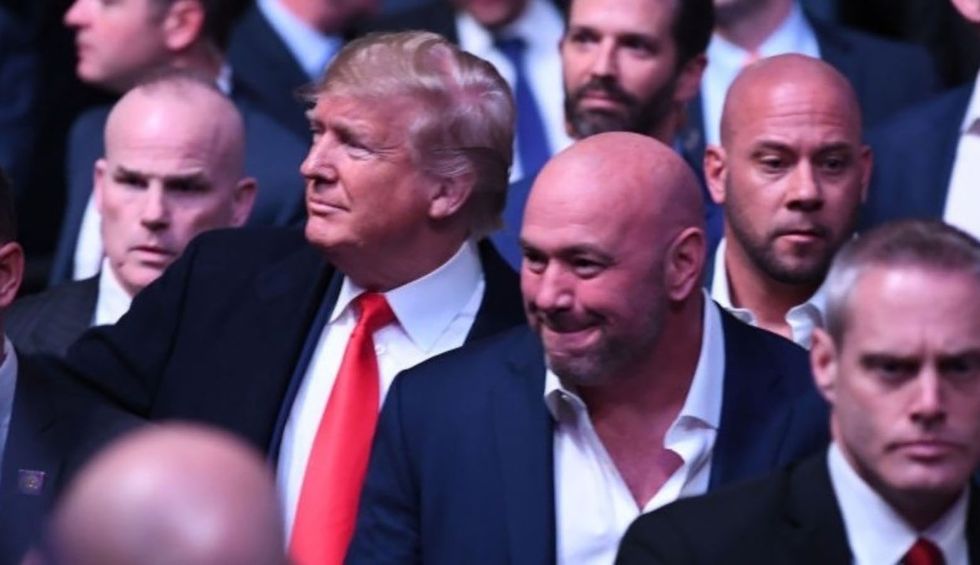 Not even one week after Donald Trump was booed by spectators at Game 5 of the World Series in Washington D.C., he took a little journey to New York’s Madison Square Garden, where he was booed once more. Trump, who has been a fan and supporter of the Ultimate Fighting Championship (UFC) for a long time, appeared at the MMA match with his sons, Donald Trump Jr. and Eric Trump, as well as House Minority Leader Kevin McCarthy and Republican Reps. Peter King and Mark Meadows.

Trump waved and gave a thumbs up to the crowd, reports The New York Times.

Here are some clips of the moment, which have gone viral on Twitter. And of course, some commentary from the Trumps.

This may be the best one yet. You get to hear the crowd for a few seconds BEFORE Donald Trump shows up. Sorry, Do… https://t.co/UqD5wMmQcn
— TrumpsTaxes (@TrumpsTaxes)1572749750.0

This could be the last time Trump ventures out in public. Massive boos as he entered Madison Square Garden last nig… https://t.co/keDvGZn9GW
— Mark Elliott (@Mark Elliott)1572797945.0

Protesters also convened outside of the arena:

Donald Trump Jr. took to Twitter to try and write-off the jeering videos. He also made an interesting jab at “blue checkmark” Twitter (referring to verified Twitter accounts) though he does, indeed, have a blue checkmark himself:

Despite the bullshit from blue checkmark Twitter, when we walked into the arena it was overwhelmingly positive.… https://t.co/aWdYtM4gEk
— Donald Trump Jr. (@Donald Trump Jr.)1572751862.0

Eric Trump also went to bat for his dad, and brought out a little hashtag Fake News:

What a joke. You are the most dishonest people. The audience was chanting “Donald Trump, Donald Trump” followed by… https://t.co/Tuaue6nLwO
— Eric Trump (@Eric Trump)1572758401.0

He also compared entering MSG to entering one of his rallies:

And, for memory’s sake, Trump being booed at Nationals Park: