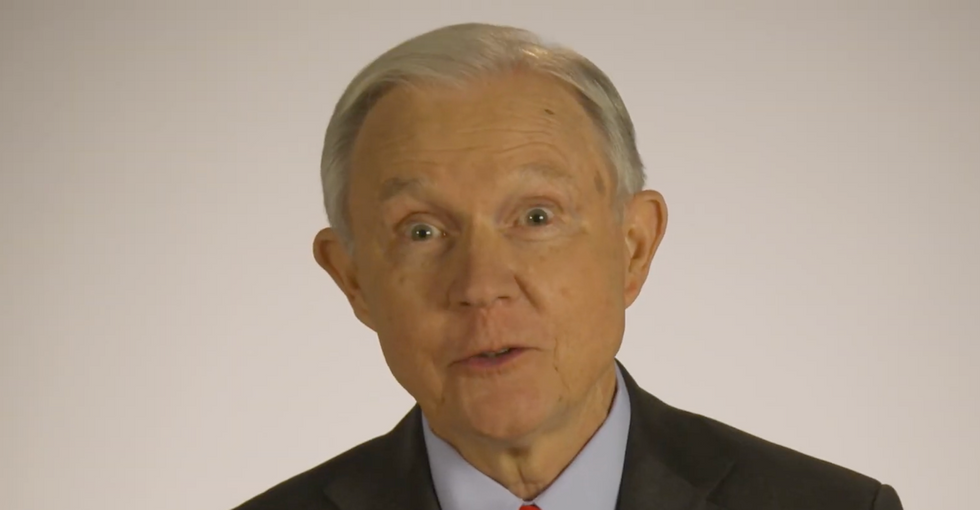 I guarantee you've never seen a political ad like the video Jeff Sessions posted on Thursday as he launched his bid to reclaim his old Alabama seat in the U.S. Senate.

The announcement of his campaign had been expected after multiple reports found that he was looking to run despite consternation from his fellow Republicans. Sessions had been the senator from deep-red Alabama before he joined President Donald Trump's Cabinet as attorney general. So in some ways, he's a natural fit to take on Democratic Sen. Doug Jones, who won a fluke special election by running against the catastrophic candidate Roy Moore in 2017. Moore faced multiple allegations of sexual misconduct with young women and girls in that campaign.

But Sessions was unceremoniously ousted by Trump right after the 2018 midterm elections, and the president had long made his anger at Sessions widely known. He fumed at the attorney general for recusing himself from the Russia investigation, even though ethics rules obligated Sessions not to participate in a probe of the Trump campaign after serving as the president's surrogate ahead of the election. Trump's firing of Sessions — a clear attempt to wrest control over the investigation — has been an under-discussed instance of potential obstruction of justice or impeachable offense by the president.

All this baggage brings us to Sessions' surreal campaign video. Knowing he is bound to face criticism from Trump, and knowing that he needs the support of Trump's base to win 2020, Sessions's ad pushes a bizarre argument that, despite the fact that the president clearly doesn't like him, Republican voters should.

He sidestepped the fact that he was fired by Trump in humiliating fashion, saying: "When I left President Trump's Cabinet, did I write a tell-all book? No. Did I go on CNN and attack the president? Nope! Have I said a cross word about our president? Not one time. And I'll tell you why: First, that would be dishonorable. I was there to serve his agenda, not mine. Second, the president's doing a great job for America and Alabama. And he has my strong support."

The video cannot be fully explained in words, though, because Sessions' facial expressions and tone add a ridiculous and absurdist element that defies description.

But beyond the aesthetics, the message is just a staggeringly blunt and humiliating one. Sessions knows Alabama voters will know who he is, and he knows they know Trump doesn't like him. His pitch is: Vote for me anyway, because I won't let the president's ferocious personal contempt for me stand in the way of pledging my undying support for him.

Sessions will prostrate himself at the altar of Trump, no matter the cost to his dignity. It's yet to be seen if that turns out to be a winning campaign message.