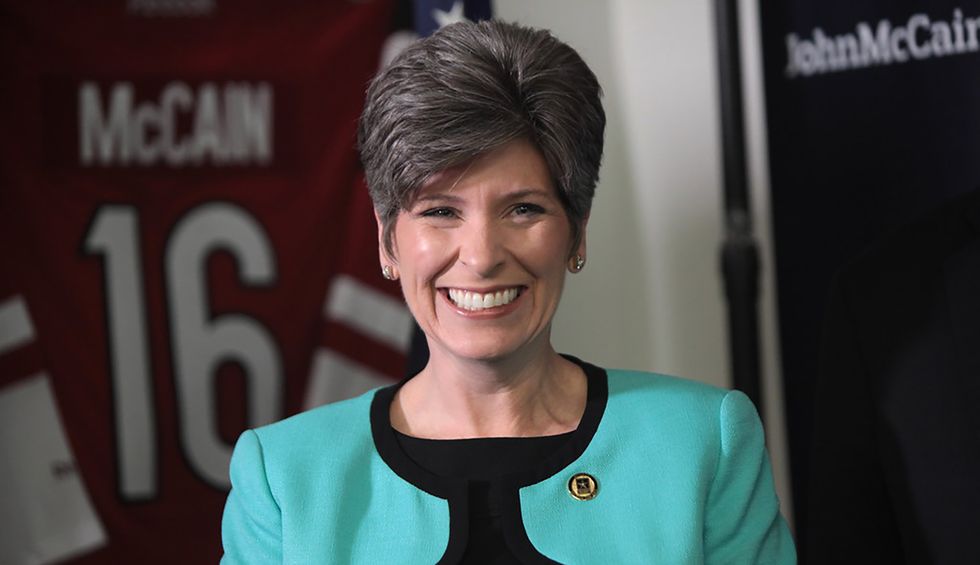 Townhall events have not been going well for Iowa Sen. Joni Ernst, who in October, encountered an angry Iowa voter who demanded to know when she would grow a spine and stand up to President Donald Trump over the Ukraine scandal. And at a townhall this month in Muscatine, Iowa, voters gave her hell over Ukraine once again.

In Muscatine, Ernst took three questions about Ukraine, and one man demanded to know what she planned to do about Trump’s actions. Ernst, however, refused to say anything against Trump despite the voters’ concerns over his attempt to pressure Ukrainian President Volodymyr Zelensky into investigating former Vice President Joe Biden and his son Hunter Biden. Ernst went full-on partisan at the Muscatine townhall, insisting that the impeachment inquiry presently being conducted by House Democrats is without merit.

After the Muscatine event, Ernst told The Guardian that House Democrats “were just trying to find anything that would give them traction to impeach Trump.”

At the townhall in early October, Iowa voter Amy Haskins demanded to know, “Where is the line? When are you guys going to say ‘enough’ and stand up and say, ‘You know what? I’m not backing any of this.’”

Ernst’s refusal to say anything critical of Trump would not be a big deal if she were up for reelection in Mississippi, Idaho, Alabama or Wyoming, all of which are deep red states. Iowa, however, is more of a swing state: President Barack Obama carried Iowa in both 2008 and 2012, although Trump defeated Democratic presidential nominee Hillary Clinton by 10% in Iowa in 2016. And Ernst — like Sen. Susan Collins in Maine, Sen. Martha McSally in Arizona and Sen. Cory Gardner in Colorado — is among the incumbent Republican senators who is considered vulnerable in 2020.

In order to regain the U.S. Senate next year, Republicans will need to flip four GOP-held seats while keeping all of the seats they are defending. If Ernst, Collins, McSally and Gardner all lost in 2020, Democrats would achieve a Senate majority — assuming Sen. Doug Jones didn’t lose in Alabama, where the incumbent Democrat is facing a tough battle for reelection.

One of the Democrats who is competing for the 2020 senatorial nomination in Iowa and hoping to run against Ernst in the general election is Theresa Greenfield, whose campaign manager, Jordanna Zeigler, is highly critical of Ernst’s response to the impeachment inquiry.

Zeigler told The Guardian, “It’s wrong, plain and simple, for any president to pressure a foreign government to investigate a political opponent and interfere in our elections. Iowa voters expect Congress to get to the bottom of this in an objective and non-partisan way, which is why it’s so disappointing to see Sen. Ernst playing politics and already dismissing information that could threaten the integrity of our elections.”

Ernst has been quite evasive when reporters ask her whether or not it is appropriate for a president to ask a foreign leader to investigate a political revival. When CNN’s Randi Kaye asked Ernst that question last month, she never really answered it and gave what Kaye’s colleague, Anderson Cooper, described as a “non-answer.”