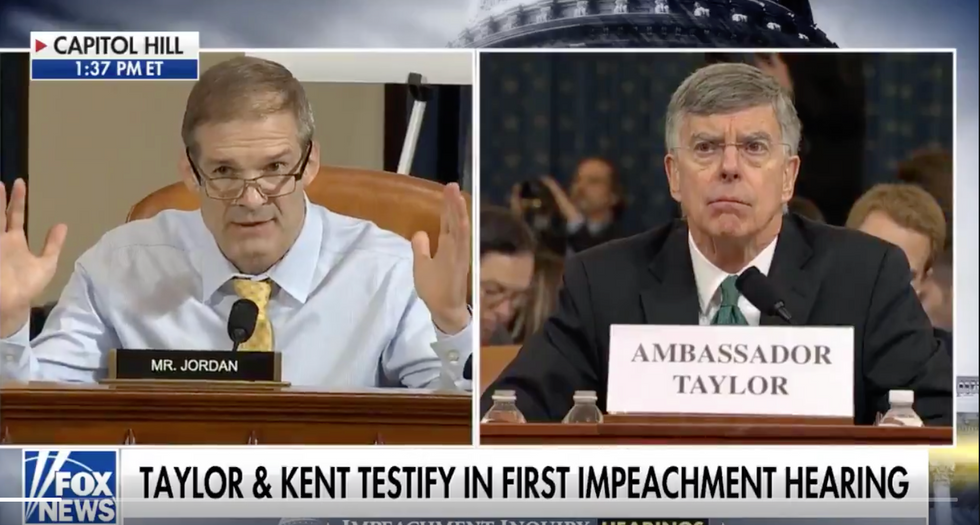 To any halfway objective observer, the first day of public hearings in House Democrats' impeachment inquiry, which are ongoing as of this writing, have not gone well for Trump's defenders.

Bill Taylor, the top US ambassador in Kyiv, and veteran State Department official George Kent came off as principled and non-partisan as they delivered damning testimony about the Trump regime's multifaceted campaign to coerce the Ukrainian government to announce an investigation into fringe right-wing conspiracy theories designed to deflect blame for interfering in the 2016 election from Russia and onto Ukraine.

Understandably, Republicans on the House Intelligence Committee made only half-hearted attempts to impeach their testimony. For the most part, they resorted to bluster about the Bidens and the whistleblower's anonymity and complaints about how unfair the rules that they themselves established when they ran the House seem now that they're in the minority.

But amid all of the flibberty gibberty, they did make three substantive claims in defense of Trump's behavior. All of them are contradicted by what we know publicly of the events in question.

First, they pointed out that Ukrainian officials didn't know that military aid had been held up when Trump had that July 25 call with Ukrainian President Volodymyr Zelensky. How could Trump have used the aid to pressure Ukraine if they didn't even know it had been blocked?

This is part of a larger attempt to frame the impeachment debate around only that one call, and get the public to ignore the rest of the campaign. But the bigger problem is that Trump informed Zelensky himself on that very call that investigating the Bidens and Crowdstrike and a nonexistent email server would be linked to the sale of Javelin missiles. That is according to the partial, edited transcript that the White House released to the public.

Zelensky: I would also like to thank you for your great support in the area of defense. We are ready to continue to cooperate for the next steps specifically we are almost. ready to buy more Javelins from the United States for defense purposes.

The President: I would like you to do us a favor though because our country has been through a lot and Ukraine knows a lot about it. I would like you to find out what happened with this whole situation with Ukraine, they say Crowdstrike... I guess you have one of your wealthy people... The server, they say Ukraine has it. There are a lot of things that went on, the whole situation. I think you're surrounding yourself with some of the same people. I would like to have the Attorney General call you or your people and I would like you to get to the bottom of it. As you saw yesterday, that whole nonsense ended with a very poor performance by a man named Robert Mueller, an incompetent performance, but they say a lot of it started with Ukraine. Whatever you can do, it's very important that you do it if that's possible.

There are multiple fallacies here, even setting aside the obvious fact that attempting to commit a crime is itself a criminal act even if you're not successful.

First, as The New York Times reported, Zelensky did, in fact, "bow[] to Trump's demands." An interview with CNN's Fareed Zakaria was set up, during which Zelensky had agreed to announce the probe Trump wanted. According to The Times, Zelensky did not want to do the interview, but "he had been told by two United States senators" that "only Mr. Trump could unlock the aid... and time was running out. If the money, nearly $400 million, were not unblocked by the end of the fiscal year on Sept. 30, it could be lost in its entirety."

The story about the whistleblower's complaint then broke, the aid was released and Zelensky never did the interview.

But it's also the case, according to Bloomberg, that Trump also didn't sign off on releasing the aid. Rather, "the State Department had quietly authorized releasing $141 million of the money several days" before Republicans claim the White House stopped blocking the funds. "The State Department decision," according to the report, "stemmed from a legal finding made earlier in the year, and conveyed in a classified memorandum to Secretary of State Michael Pompeo. State Department lawyers found the White House Office of Management and Budget, and thus the president, had no legal standing to block spending of the Ukraine aid."

Republicans' third, more expansive argument is that the entire narrative is undermined by the fact that the Trump White House had been significantly more supportive of Ukrainian efforts to fight Russia's territorial encroachment than the Obama administration had been. This claim supposedly discredits not only the Ukraine allegations but also the very idea that Trump has consistently placated the Kremlin. During today's hearing, GOP Reps were eager to parrot their talking-point that Obama had only offered Ukraine "blankets" while Trump had given them piles of military equipment.

Before digging into the substance of the broader claim, note that, as a Washington Post fact-check detailed, "while the Obama administration did not send lethal aid, it in 2015 provided Ukraine more than $120 million in security assistance for Ukraine and had pledged an additional $75 million worth of equipment including UAVs, armored Humvee vehicles, counter-mortar radars, night vision devices and medical supplies, according to the Pentagon's Defense Security Cooperation Agency. Many of these same items were provided by the Trump administration."

As for the broader point,  one of the less-discussed aspects of Trump and Rudy Giuliani's pressure campaign, at least here in the United States, was their efforts, first revealed in the whistleblower's complaint, to lean on Zelensky to negotiate a deal with Russia that would legitimize its annexation of Crimea and cement its position in the Donbas region of eastern Ukraine. In September, Trump publicly urged Zelensky to accept a deal with Putin during a meeting of the United Nations in New York.

Last month, that's precisely what the Ukrainian president did, setting off fierce protests at home over his "capitulation" to the Kremlin. As The Daily Beast reported, there's a widespread belief in Ukraine that Zelensky accepted a deal that was "very much on Russian terms" as a result of pressure from Trump, and this has done an enormous amount of damage to the relatively new president's domestic standing.