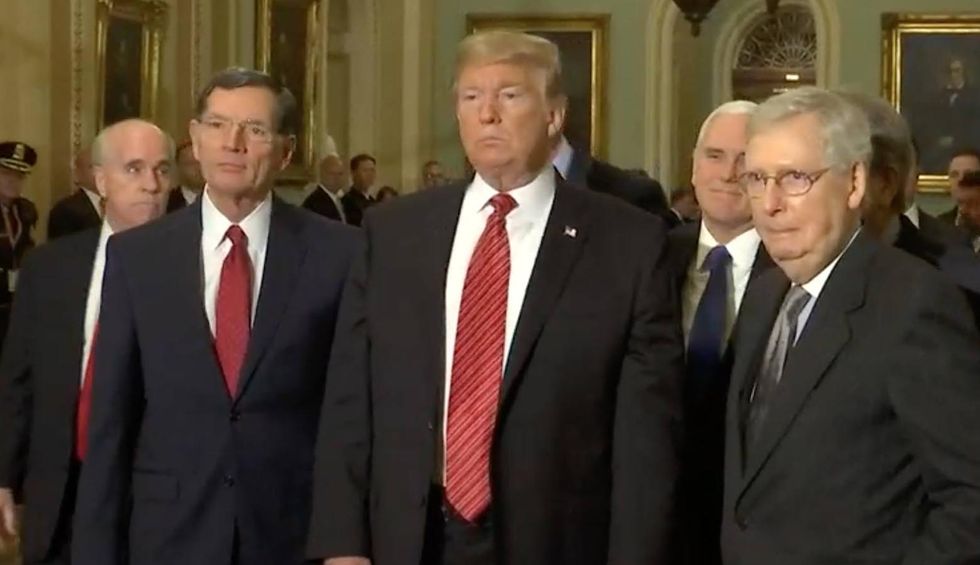 Several Republican senators have taken a “vow of silence” on the impeachment inquiry in the House of Representatives.

Maine Senator Susan Collins has described her position this way: “I am very likely to be a juror so to make a predetermined decision on whether to convict a president of the United States does not fulfill one’s constitutional responsibilities.”

From a purely political standpoint, the senators’ choice is beneficial for both parties. The senators cannot find it easy to speak approvingly of the president’s opportunistic conduct with foreign countries, so silence is probably the most graceful position for the Republican Party.

The silence is also helpful from the Democratic Party’s perspective. Democrats would no doubt prefer that the senators just abandon Trump immediately, but that seems unlikely to happen. The silence at least preserves the possibility that they will convict Trump if and when the time comes.

That said, there is nothing requiring the senators to remain silent on the issues. No written law or rule instructs senators to take that approach. The Senate’s Rules on Impeachment Trials do not address pretrial conduct at all.

The senators’ choice seems to stem instead from a decision to treat the impeachment proceeding much like a judicial trial. As a professor of Constitutional law, I find that analogy quite apt.

Constitution lays it out

Under the Constitution, the House of Representatives is granted the exclusive power to impeach – or bring charges against – officers of the United States, including the president.

Once articles of impeachment (charges) are passed by the House, they are brought to the Senate for trial. Members of the House are named “managers” of the impeachment and are responsible for bringing forth evidence to support the charges.

The president cannot be convicted and removed from office unless two-thirds of the senators vote for that outcome.

This process is readily comparable to criminal proceedings in the courts.

In both, the charging function and the trying function are distinct and are carried out by different institutions. The House arrives at the specific charges, votes to proceed (much like a grand jury), and then presents to the Senate the evidence in favor of conviction (much like a prosecutor). The Senate simply listens to the evidence and votes, just as a jury would in a criminal proceeding.

Although some might argue that having the Senate decide the question renders impeachment trials a political rather than legal event, the history of the impeachment provisions suggests otherwise.

In James Madison’s draft of the Constitution, he conferred the power to impeach the president on the House of Representatives, just as the Constitution reads now, but Madison had the Supreme Court, rather than the Senate, conducting the trial.

Ultimately Madison’s position was defeated not because a judicial proceeding was a bad idea, but because his framing colleagues worried that relying on the Supreme Court raised several particular concerns.

Gouverneur Morris thought the justices might unduly favor the president, given that he would have appointed them. Alexander Hamilton thought the court was just too small a group for such a momentous decision, and also might be called into play later if the president were criminally prosecuted after his removal.

Because impeachment gives rise to a proceeding akin to a criminal trial, the senators’ silence may not be required, but is appropriate.

In federal and state trials all over the country, courts routinely instruct jurors to refrain from drawing a conclusion – and refrain even from speaking with other jurors – until all the evidence is in. The “pattern” instructions the courts rely on usually include an instruction like this: “Do not discuss this case among yourselves until I have instructed you on the law and you

have gone to the jury room to make your decision at the end of the trial. Otherwise, without realizing it, you may start forming opinions before the trial is over.”

Rule 2.10 of the Model Code of Judicial Conduct, which has been adopted by the vast majority of states, directs judges not to commit publicly to stances on issues that may end up before them.

The idea is that when people publicly state a position, it is much harder for them to consider impartially evidence suggesting that their public position was wrong. Put simply, face-saving must not become more important than making an impartial decision.

There is some public cost to the senators’ choice to remain silent. To the extent that the senators decline to address the emerging impeachment issues, their constituents are unable to evaluate their oversight of the president.

That period of ambiguity, however, is brief. It will end the moment that each senator rises in the chamber and casts a vote to acquit or to convict.

So Republican senators are not legally required to remain silent in the face of becoming jurors, but their doing so in service to impartiality makes sense given the gravity of the proceeding.

Democrat Raymond Thornton of Arkansas voted to impeach President Richard Nixon in 1974. In an interview with a historian the year after the impeachment, Thornton explained his approach to the momentous responsibility he had faced.

“I considered that this was most likely the most important task I would ever have in government and that my whole effort should be given to the study of it and to try to come up with an answer that was fair and right and which I could live with for the rest of my life.”