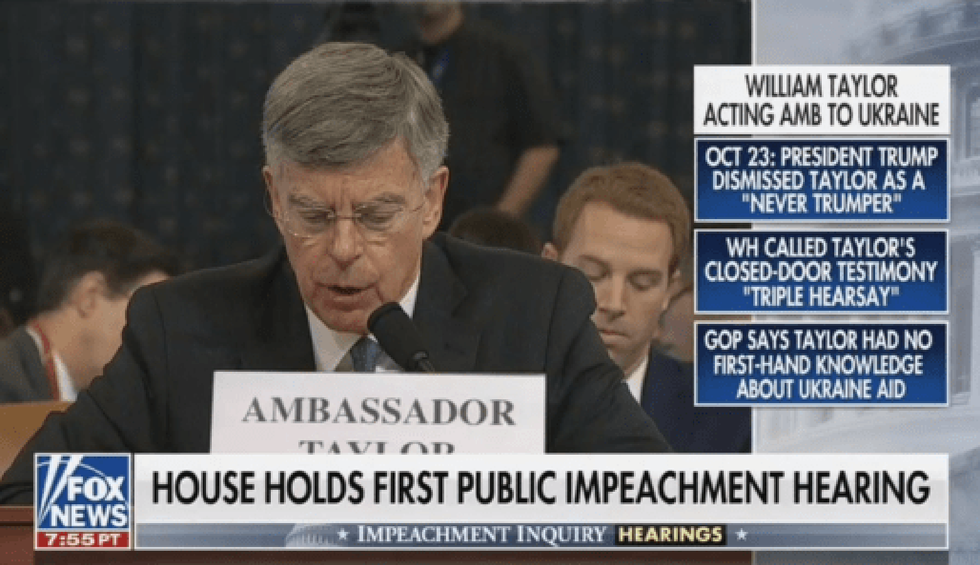 Saying that Fox News is a mouthpiece for right-wing disinformation is not a revelatory statement. But the depth of the network’s entanglement with conservative forces cannot be understated. As the first public impeachment hearings take place Wednesday, Fox News has made it clear that, as much as possible, it will lean on the scales to present damning testimony against Donald Trump in a perverse light.

It might seem like satire but as Democratic Rep. Adam Schiff opened the proceedings, Fox News put up graphics alongside Schiff’s face with “information” like: “House GOP has supported censuring Schiff for actions during inquiry;” “9/26: Schiff publicly exaggerated substance of Trump-Zelensky call; “10/13: Schiff admitted to not being clear about contact w/ whistleblower.” If Fox News could, it would likely play ominous music beneath the proceedings any time a Democratic official spoke.

Those are real graphics laid over live testimony concerning whether or not the president of the United States acted immorally and criminally, putting his personal political desires over the needs of the American people. But, even though this is not a Saturday Night Live sketch, the amount of forethought and work that goes into creating these graphics and then rolling them out live IS EXACTLY as involved as a segment of SNL. Someone must first come up with the copy (that is the text you read in the graphics), and then that is edited and sorted by a production team. The graphics department creates a series of the captions that can be laid out on a screen in such a way as to not block the video image being shown. Then, as the live feed takes place, a producer/director tells a team, in real time, which camera angles to go to and which graphic packages to put up at any given time.

The fact that Fox News’ “graphic package” for these hearings so closely reiterates the Republican talking points being spouted means there must have been quite a bit of pre-hearing discussion between those working at Fox and people with direct knowledge of the GOP’s game plan. Once again, this is not a revelation. It is more proof of how through-the-looking-glass—and how absent of all objectivity—this “news” organization is.

There is wide-ranging discussion about Fox News’ impeachment hearing disinformation efforts on Facebook and social media outlets. But when will we address the elephant in the room, which is the disinformation that appears every hour of every day on Fox News? The network does a disservice to its audience, and to the nation as a whole.