Fox & Friends hosts visibly deflate after legal analyst drops the hammer on Trump: ‘The law is not on the president’s side’ 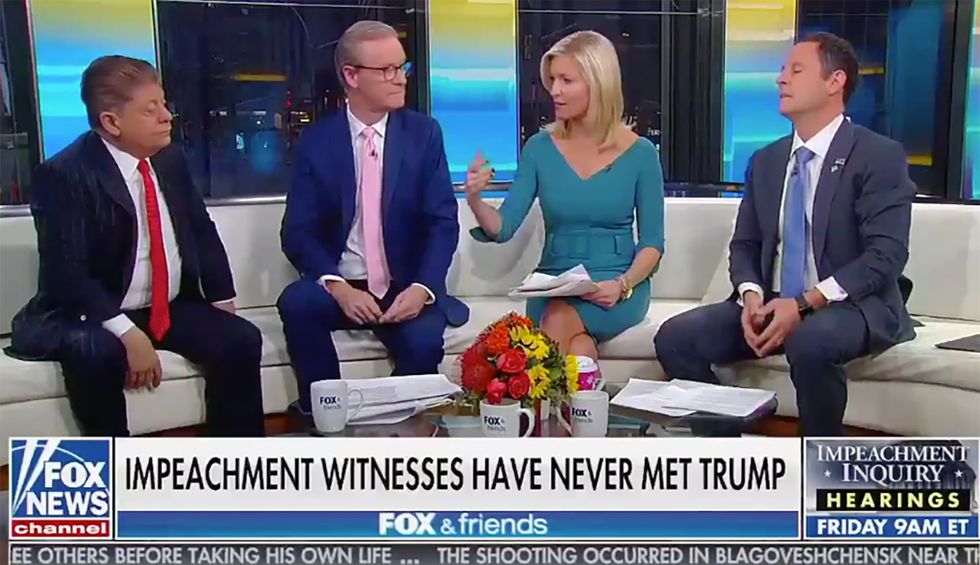 Fox News legal analyst Andrew Napolitano on Thursday delivered some sobering news to the hosts of “Fox & Friends,” who did their best to spin Wednesday’s impeachment hearings as a win for President Donald Trump.

During an interview, co-host Ainsley Earhardt argued that much of the testimony given by witnesses Bill Taylor and George Kent revolved around merely their opinions of the president’s actions in withholding aid from Ukraine.

“Everybody does have their own opinion,” he acknowledged. “But… there doesn’t seem to be any dispute that the president wanted dirt on Biden and the president was willing to hold up military aid in order to get it.”

Co-host Brian Kilmeade then interjected to say that Trump should have been asking Ukraine to investigate the Bidens — but Napolitano stopped him dead in his tracks.

“The law is not on the president’s side,” he said. “The law says asking for a campaign favor, whether it arrives or not…”

“But it’s not a campaign favor!” Kilmeade objected.

“Well that depends on how you look at it,” Napolitano replied. “Is he investigating 2016 or does he want dirt on Biden… for 2020?”

Earhardt then tried to claim that Trump couldn’t have been engaging in extortion because Ukraine eventually received its money.

“The delay is the quid pro quo,” he replied. “The delay of 55 days knowing that the Russians were at the border.”

Andrew Napolitano responds to Ainsley Earhardt saying impeachment is all opinion: "Everybody does have their own op… https://t.co/LBy6WUSJqT
— Bobby Lewis (@Bobby Lewis)1573736295.0

Ainsley Earhardt argues "it's not quid pro quo" because Ukraine never felt pressure and they got the aid anyway, an… https://t.co/pssb7X3s6v
— Bobby Lewis (@Bobby Lewis)1573736416.0