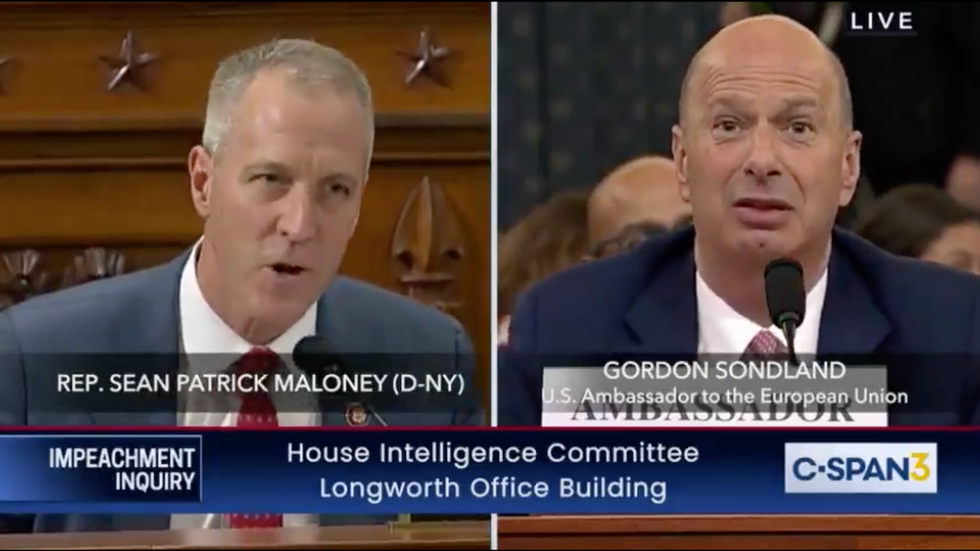 Rep. Sean Maloney (D-NY) sparked a heated exchange with Ambassador Gordon Sondland on Wednesday during his testimony in the impeachment inquiry, first grilling him on the propriety of President Donald Trump's efforts to get Ukraine to launch investigations into his political rivals. He then moved on to lambasting Sondland's candor in his testimony, which he has updated multiple times and reflects big gaps in his memory.

Maloney repeatedly tried to get Sondland to admit that, while Trump was holding leverage over Ukraine, he stood to benefit electorally from the investigation he sought into former Vice President Joe Biden. But it was difficult for Maloney to admit this outright.

"Who would benefit from an investigation of the Bidens?" Rep. Maloney asked repeatedly.

"There we have it!" Maloney declared bitingly, to mild applause. "Didn't hurt a bit, did it?"

Sondland was clearly irritated by this line of questioning.

"I’ve been very forthright, and I resent what you’re trying to do," he said.

"Fair enough! You've been very forthright? This is your third try to do so, sir!" Maloney said, now clearly spitting fire himself. "Didn't work so well the first time, did it? We had a little declaration come in after? Remember that? And now we're here from you a third time. And we got a doozy of a statement from you this morning. There's a whole bunch of stuff you don't recall. So all due respect sir, we appreciate your candor, but let’s be really clear what it took to get it out of you."