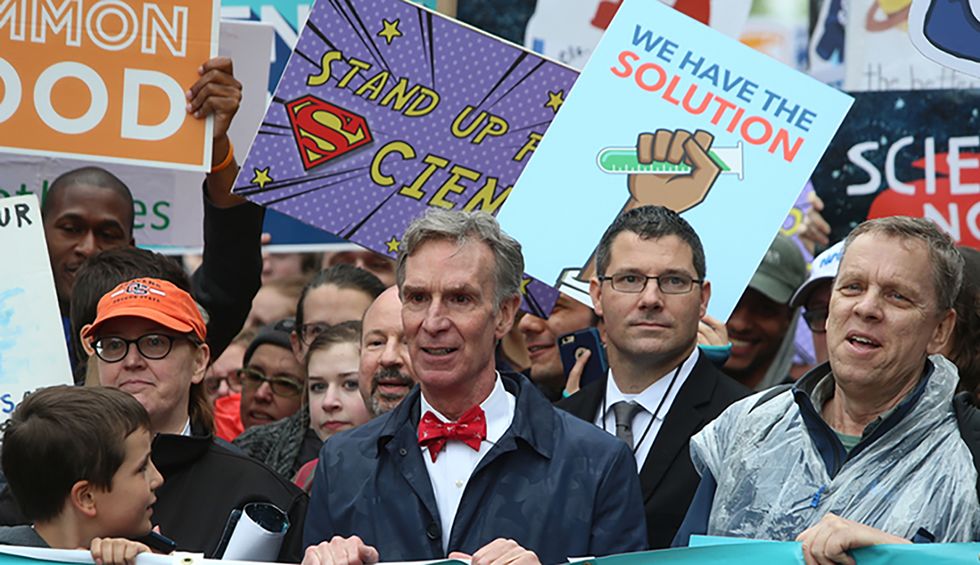 Advocates of strong public health protections responded with alarm to a Monday night New York Times report on the Environmental Protection Agency's new draft proposal for the Trump administration's drawn-out effort to dramatically scale back the scientific research that can be used in government policymaking.

"Let's call this what it is: an excuse to abandon clean air, clean water, and chemical safety rules," said Andrew Rosenberg, director of the Center for Science and Democracy at the Union of Concerned Scientists. "This is a blatant removal of well-established science from the policymaking process, to the benefit of polluters and at a huge cost to the marginalized communities who face the biggest threat from pollution."

Trump Administration is making it easier to pollute our air and water for the profit of corporations. This literall… https://t.co/8qUOXT3EMU
— Wajahat Ali (@Wajahat Ali) 1573512886

The draft proposal (pdf), titled "Strengthening Transparency in Regulatory Science," would force the agency to only consider research that discloses all raw data, including private medical files. It follows a similar proposal unveiled by former EPA chief Scott Pruitt in April 2018 that provoked nearly 600,000 comments from the public, the majority of which were critical.

Pruitt's successor as EPA administrator, ex-lobbyist Andrew Wheeler, delayed the prior proposal, purportedly to consider concerns from environmental and public health groups. However, the new version "headed for White House review and obtained by The New York Times shows that the administration intends to widen its scope, not narrow it."

The measure would make it more difficult to enact new clean air and water rules because many studies detailing the links between pollution and disease rely on personal health information gathered under confidentiality agreements. And, unlike a version of the proposal that surfaced in early 2018, this one could apply retroactively to public health regulations already in place.

"This means the EPA can justify rolling back rules or failing to update rules based on the best information to protect public health and the environment, which means more dirty air and more premature deaths," said Paul Billings, senior vice president for advocacy at the American Lung Association.

Public health experts warned that studies that have been used for decades—to show, for example, that mercury from power plants impairs brain development, or that lead in paint dust is tied to behavioral disorders in children—might be inadmissible when existing regulations come up for renewal.

One key example of scientific research that wouldn't be permissible for government use under the EPA proposal is a 1993 Harvard University project known as the Six Cities study, which connected air pollution to premature deaths and subsequently informed nationwide air quality policies.

"A separate internal EPA memo viewed by The New York Times shows that the agency had considered, but ultimately rejected, an option that might have allowed foundational studies like Harvard's Six Cities study to continue to be used," the newspaper reported Monday.

As journalist Emily Atkin put it in her HEATED newsletter Tuesday: "In other words, air pollution denial is becoming U.S. policy for the first time." She noted that this proposal "is a key priority of Steve Milloy, a former tobacco and fossil fuel industry lobbyist who served on Trump's EPA transition team."

Atkin recalled speaking with Stan Glantz, a professor of tobacco control at the University of California San Francisco, when reporting on Pruitt's version of the proposal last year. The tobacco industry, Glantz told her, "realized that, rather than fighting every single study that came out linking them to cancer, if they could get the rules of evidence changed, they wouldn't have to worry about it."

The Times report on Wheeler's revived and expanded version elicited impassioned warnings and critiques on Twitter:

A dangerous move that will impact the health of our communities today & for decades to come. Also attacking rigoro… https://t.co/ywcxMbY7J2
— Carmen Marsit🏳️‍🌈 (@Carmen Marsit🏳️‍🌈) 1573565707

The safety of the air we breath and water we drink shouldn’t be partisan. But sadly is, as R lawmakers in the pocke… https://t.co/APSnkMyL1G
— Wendy Davis (@Wendy Davis) 1573560198

An EPA spokesperson told the Times in an emailed statement that "the agency does not discuss draft, deliberative documents, or actions still under internal and interagency review." Wheeler, for his part, said in September that "we're moving forward [with the proposal] to ensure that the science supporting agency decisions is transparent and available for evaluation by the public and stakeholders."

UCS's Rosenberg said Tuesday that "Wheeler's claims about the need for these restrictions don't pass the laugh test. Everything about this rule makes a mockery of the EPA's claim that this change is necessary for transparency. This rule was driven by political operatives. It's being rushed through with minimal opportunity for public comment. And it introduces pointless hurdles and delays into the policymaking process that will compromise the federal government's ability to protect the public."

"The Trump administration has a clear pattern of sidelining science and undermining public health protections," he added. "If this rule is finalized, it would be one of the most damaging and far-reaching policy changes enacted by the administration. It would put the entire enterprise of developing science-based public health safeguards at risk."

The Times report came ahead of a Wednesday morning hearing planned by the Democrat-controlled U.S. House Science, Space, and Technology Committee about the Trump administration's effort to restrict the use of scientific research in federal policymaking, which will feature testimony from various scientists and public health experts.