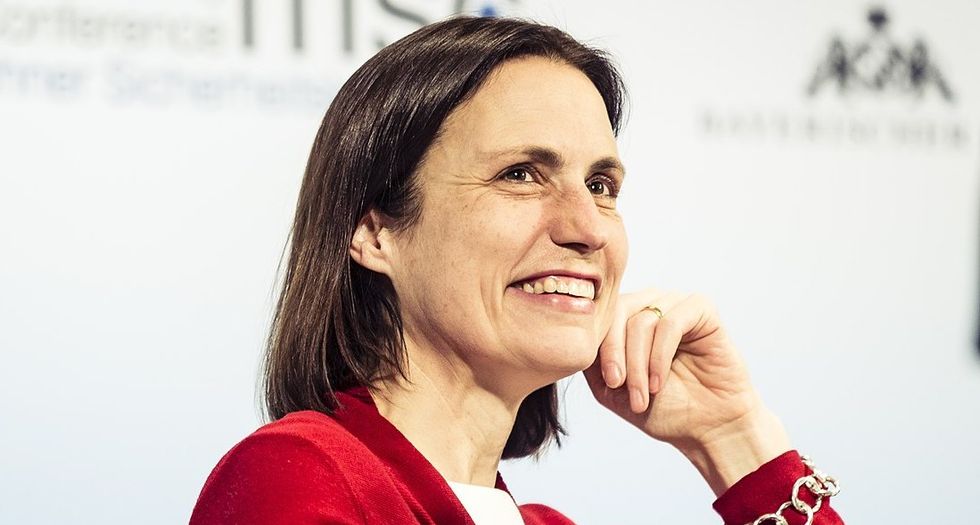 The deposition of former NSC director for Russia and Eastern Europe Fiona Hill was released by the House impeachment inquiry on Friday. Unlike several others who testified before the inquiry, Hill left the White House before Donald Trump’s call to Ukrainian President Volodymr Zelensky in July, so her testimony did not focus on aftereffects of that call or the delay in providing already approved military assistance. Instead, much of Hill’s testimony focused on the events surrounding the dismissal of Ambassador Marie Yovanovitch and the pressure that was already being applied to Ukrainian leadership by Rudy Giuliani.

However, while Hill may have been gone before Trump’s call, she was definitely still on hand for a July 10, 2019 meeting in which Ambassador Gordon Sondland made it clear Trump had political demands if Ukraine wanted to have any relationship with the United States.

Hill: Ambassador Sondland blurted out ‘Well, we have an agreement with the chief of staff for a meeting if these investigations in the energy sector start.’  And Ambassador Bolton immediately stiffened. … and ended the meeting.

By “investigations in the energy sector” Sondland means investigations into Burisma Holdings, the oil and gas company where Hunter Biden served on the board. This is the meeting following which Sondland took the Ukrainian official aside in the White House basement and drove home that Trump required investigations into Biden and the 2016 election—a meeting that’s also reported in both the deposition of NSC official Alexander Vindman and in Sondland’s updated statement. What wasn’t previously reported was the full cast of that meeting, which included not just Hill, Vindman, and Sondland but special envoy Kurt Volker and Energy Secretary Rick Perry.

Hill: Ambassador Sondland said to Ambassador Volker and also Secretary Perry and the other people who were with him, including the Ukrainians, to come down to ... the Ward Room, to basically talk about next steps. And that’s also unusual. I mean,he meant to talk to the Ukrainians about next steps about the meeting. ... Ambassador Bolton pulled me back as I was walking out afterwards and said, ‘Go down to the Ward Room right now and find out what they’re talking about and come back and talk to me.’ So I did go down.

Hill’s whole testimony reads like a thriller … except the bad guys are Trump, Giuliani, Mick Mulvaney, and the ‘three amigos.’ So not a very smart thriller.

That follow-on meeting was one that resulted in Vindman going straight to White House attorney John Eisenberg to report his concerns, while Hill relayed the events back to Bolton.

Hill: Ambassador Sondland, in front of the Ukrainians, as I came in, was talking about how he had an agreement with Chief of Staff Mulvaney for a meeting with the Ukrainians if they were going to go forward with investigations. And my director for Ukraine was looking completely alarmed. And I came in again as this discussion was underway… And I said, ‘Look, I don’t know what’s going on here, but Ambassador Bolton wants to make it very clear that we have to talk about, you know, how are we going to set up this meeting. It has to go through proper procedures.’ And [Sondland] started to basically talk about discussions that he had had with the chief of staff. He mentioned Mr. Giuliani, but then I cut him off because I didn’t want to get further into this discussion at all.

Hill follows up by making it absolutely clear that she personally heard Sondland tell the Ukrainian officials that Trump wanted an investigation into Burisma. Hill notes the presence of Vindman at this second meeting, along with Kurt Volker. And when she got back to Bolton with her report, that was the cue for his best line of the whole scandal.

Hill: Ambassador Bolton asked me to go over and report this to our NSC counsel, to John Eisenberg. And he told me, and this is a direct quote from Ambassador Bolton, ‘You go and tell Eisenberg that I am not part of whatever drug deal Sondland and Mulvaney are cooking up on this, and you go and tell him what you’ve heard and what I’ve said.’

Why has the impeachment inquiry been trying to get Bolton, Eisenberg, and Mulvaney to appear? That single statement sums it up. In the discussion that followed, Bolton made it cleat to Hill that he thought Mulvaney and Sondland were engaged in “an improper arrangement.” Hill then followed up with Eisenberg, reporting to him the contents of both meetings. Eisenberg told Hill that he would “follow up” with Bolton and with White House counsel Pat Cipollone.

Hill also spoke about Giuliani with deputy national security adviser Charles Kupperman and warned him that Ukraine was going to be “played by Giuliani in some way as part of the campaign.” In particular, Hill told Kupperman that she was worried about how Giuliani was pushing false information about the Bidens and “basically, the 2016 alternative theory of the election, the cyber issues—these were all getting put out through these articles in the newspaper.” The “alternative theory” here is the long debunked conspiracy theory that Russia was not involved in the 2016 election, and that the DNC server was actually hacked by Ukrainians posing as Russians on orders from Hillary Clinton, all as part of an elaborate trap for Donald Trump. Hill also said that following this event, Bolton reiterated that “nobody should be meeting with Giuliani.”

While the July 10 meeting came only a week before Hill left her position, the dismissal of Ambassador to Ukraine Marie Yovanovitch in May was something that Hill considered a “turning point” showing that foreign policy was not being handled professionally, and helped confirm her own decision to step down from the National Security Council.

Hill: Because there was no basis for her removal. The accusations against her had no merit whatsoever. This was a mishmash of conspiracy theories that, again, I’ve told you, I believe firmly to be baseless, an idea of an association between her and George Soros.

Hill said that similar claims about working for Soros were made against her, and that her time at the NSC was “filled with hateful calls and conspiracy theories.” Rather than purely political motives, Hill said she suspected that many of these accusations were the result of “business dealings of individuals who wanted to improve the investment positions inside of Ukraine” and to be able to “deflect” the findings of the Mueller report which showed extensive connections between Russia and the Trump campaign.

And, like everyone else involved in Ukraine, Hill had no problem identifying the primary source of the claims being made against Yovanovitch: Rudy Giuliani’s “campaign” of lies, and the willingness of publications like The New York Times to run with those lies.

Giuliani had not just access to Trump, but access to major media outlets. And his ability to always get his words printed or get an appearance on television made Yovanovitch’s situation intolerable.

Hill: I understood this to be the result of the campaign that Mr. Giuliani had set in motion in conjunction with people who were writing articles and, you know, publications that I would have expected better of, and also, you know, just the constant drumbeat of these accusations that he was making on the television.

Hill: [Bolton] basically said—in fact, he directly said, ‘Rudy Giuliani is a hand grenade that is going to blow everybody up.’ He made it clear that he didn’t feel that there was anything that he could personally do about this.

As has been evident in multiple hearings and statements, no one in the White House, State Department, or anywhere else liked what Giuliani was doing to the relationship with Ukraine. But any attempt to complain always ended with Trump coming down on the side of his personal attorney—because Giuliani was pursuing the conspiracy theories that Trump was also pressing through Attorney General William Barr. So Giuliani was given kid-glove treatment that allowed him to operate outside any rules.

On Ambassador Kurt Volker, Hill expressed a belief that he continued to handle himself well and act in the national interest, unlike Sondland. In fact, she had only one real complaint against Volker: He kept talking to Giuliani out of the belief that it was better to know what Giuliani was saying to Ukrainian officials and Trump. Hill agreed with Bolton that no one should be talking to Giuliani.

And while Hill was no longer in the White House when Trump made his July 25, 2019 call to Zelensky, she was asked during her deposition about whether she had read the transcript.

Hill: I was actually shocked. … particularly on Ambassador Yovanovitch, and very saddened because, again, Ambassador Yovanovitch is a great American, and I don’t think any American citizen should be disparaged by their President, just put it out there. So that made me very sad and very shocked and, yeah, not too happy. And on the other issue, it was pretty blatant. … And this is very much repeating things that Rudy Giuliani was saying in public on television.

House staff:  And by that, you mean that he wanted an investigation done of the Bidens and of this debunked conspiracy theory about 2016?

Hill: The specific references, also juxtaposed with the release of the text messages by Ambassador Volker … really was kind of my worst fears and nightmares, in terms of, you know, there being some kind of effort not just to subvert the national security process but to try to subvert what really should be  a diplomatic effort …