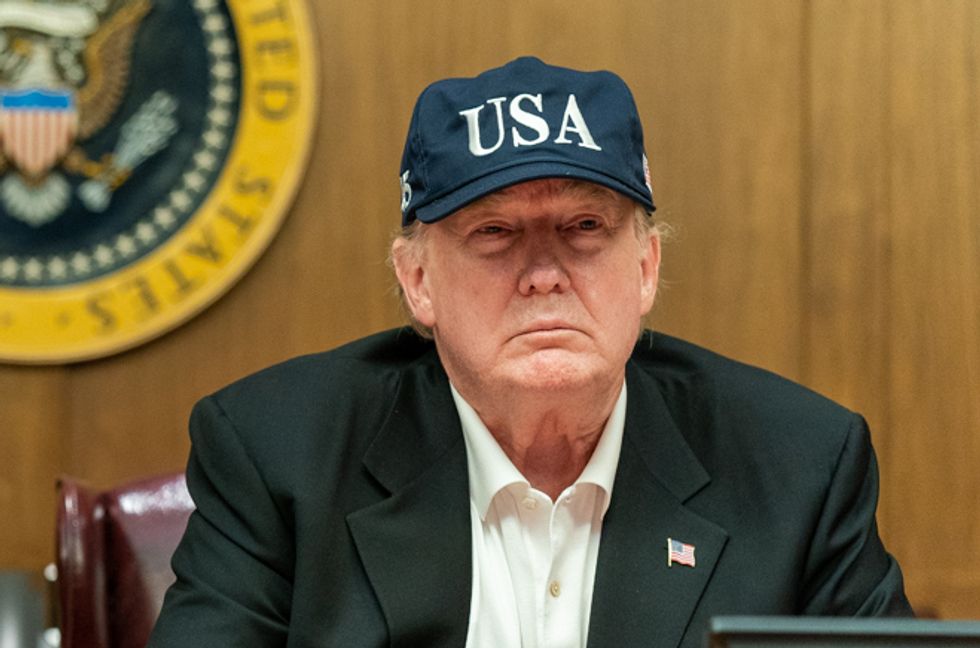 President Donald Trump has been surrounded by so many scandals and controversies that a scandal from two months ago can seem like a lifetime ago — for example, the Hurricane Dorian/Alabama fiasco of early September. With the Ukraine scandal and an impeachment inquiry in the U.S. House of Representatives dominating the headlines, few journalists are still talking about the Dorian/Alabama debacle. But journalists Asawin Suebsaeng and Sam Stein, in a November 7 article for The Daily Beast, discuss a series of e-mails showing just how much misery Trump caused the National Weather Service in order to avoid admitting that he had made a mistake.

Back in early September — when Hurricane Dorian was getting ready to pound the East Coast of the United States — Trump claimed that Alabama was going to take a direct hit. But the National Weather Service corrected him, stressing that Alabama wasn’t in Dorian’s direct path. A more responsible president — Barack Obama, for example — would have admitted to making a mistake and said something along the lines of, “The National Weather Service informs me that contrary to what I previously reported, Alabama is not in Dorian’s immediate path. I stand corrected. But I cannot stress enough that Florida, Georgia and the Carolinas must take every possible precaution.” Trump, however, doubled down on his mistake and insisted that that Alabama had, in fact, been in danger.

Trump, Suebsaeng and Stein recall, altered a “days-only forecast” map to “prove that Alabama was in danger when it really wasn’t. It was yet another bizarre, protracted episode of the Trump presidency and one that, as e-mails released under the Freedom of Information Act show, created massive internal headaches for personnel at various agencies.”

Suebsaeng and Stein explain that meteorologist “e-mail traffic provides a window into just how much Trump can upend the functions of a government in the midst of a crisis — all in the service of satisfying his pet grievances or fleeting fixation of the moment.”

In a September 5 e-mail, for example, Chris Darden — who was in charge of the National Weather Service office near Birmingham, Alabama — wrote, “This has really gotten out of hand.”

Darden was frustrated, Suebsaeng and Stein note, because “workers directly involved in handling hurricane response were forced to turn their cellphones off because of the influx of media calls seeking an explanation for the president’s tweets and his accompanying efforts to prove he’d been right about Alabama all along.”

Trump’s inability to admit he had made a mistake, according to Suebsaeng and Stein, became an unnecessary headache for the National Weather Service at a time when Dorian was a very real threat — although not for Alabama.

“The incoming e-mails appeared to truly start deluging on September 4, after Trump held an Oval Office event at which he displayed a map of the country on which he had scribbled, with a sharpie, an extended cone designed to show that Alabama had been in the path of Dorian,” Suebsaeng and Stein point out. “Earlier, the National Weather Service office in Birmingham had insisted that the state was not in danger, and with the president now directly — if not ham-fistedly — contradicting that proclamation, the calls and e-mails began arriving in bulk.”

The National Oceanic and Atmospheric Administration (NOAA), according to Suebsaeng and Stein, decided to release a statement backing Trump’s claim that Alabama was in danger — and NOAA programmer Alek Krautmann, in an e-mail to public affairs officer John Leslie, complained that the statement “is deeply upsetting to NOAA employees that have worked the hurricane and not fully accurate based on the timeline in question.”