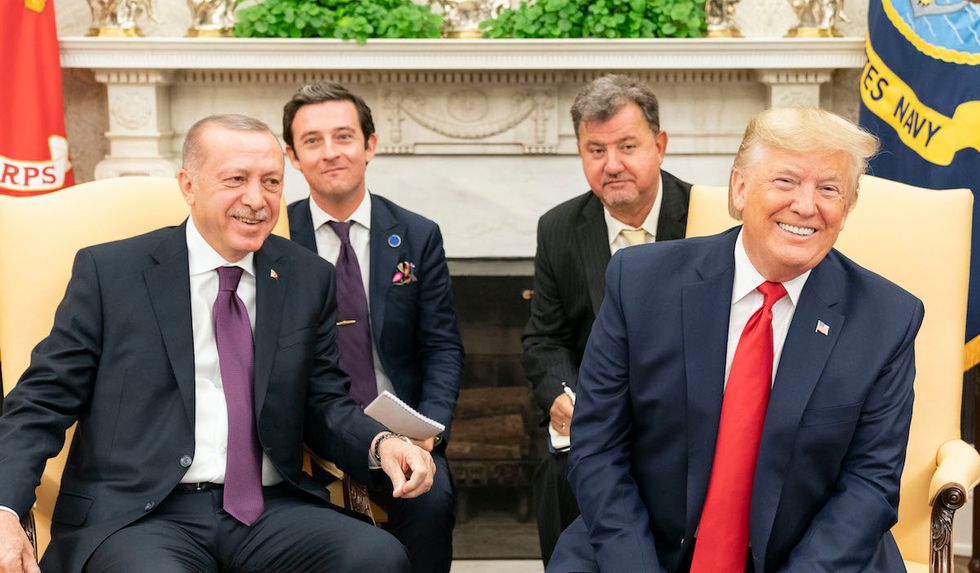 Although the first public impeachment hearings against President Donald Trump dominated the headlines on Wednesday, there was other important Trump-related news as well in Washington, D.C. — including an Oval Office meeting with Turkish President Recep Tayyip Erdogan and several GOP senators (who included Sen. Lindsey Graham of South Carolina, Sen. Ted Cruz of Texas and Sen. Rick Scott of Florida). Trump has had a very friendly rapport with Turkey’s leader, and conservative Washington Post writer Max Boot is highly critical of the way Trump handled the Oval Office meeting in his Thursday column.

“In the White House, President Trump was fawning over Turkish President Recep Tayyip Erdogan, a vicious anti-American dictator who has ethnically cleansed the Kurds in northern Syria, locked up his domestic critics and established close ties with Russia,” Boot writes.

The Never Trump conservative takes issue with some of the things Trump told Erdogan — for example, Trump’s assertion, “You’re doing a fantastic job for the people of Turkey.”

“Trump even praised Erdogan for having ‘a great relationship with the Kurds,’ which will come as news to them,” Boot asserts. “The United States reportedly has drone imagery showing atrocities committed against Kurds by pro-Turkish militias in Syria; I’d hate to see how Erdogan treats someone he has a lousy relationship with.”

But Erdogan, Boot adds, is hardly the only authoritarian Trump has a high opinion of: Trump has also expressed his admiration for Russian President Vladimir Putin.

“Knowing what we now know about how Trump operates,” Boot explains, “I cannot help but be suspicious of his motives in kissing up to Erdogan. According to NBC News, former National Security Adviser John Bolton recently said that ‘he believes there is a personal or business relationship dictating Trump’s position on Turkey because none of his advisers are aligned with him on the issue.’”

Boot wraps up his column by stressing that Trump’s foreign policy is often motivated by self-interest — and that includes Turkey.

“Whether in Ukraine or Turkey or elsewhere,” Boot writes, “Trump invariably seeks to cut deals with the most corrupt cronies he can find…. Unless Trump is removed from office by either impeachment or election, he will continue to corrupt U.S. foreign policy on a hitherto unimaginable scale.”